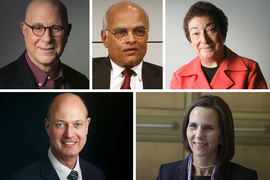 President Joe Biden’s administration represents a fresh start for the U.S. in foreign affairs. But as experts observed at an online MIT panel on Wednesday, the U.S. cannot just reset foreign policy to the last time Biden worked in the White House, as vice-president in the Obama administration. Too many things have changed, too dramatically, in the last four years.

“You can’t rewind the clock at a time when, frankly, great power rivalry is higher than it ever was,” said Shivshankar Menon, an Indian diplomat who previously served as the country’s national security adviser and as the foreign secretary in India’s Ministry of External Affairs.

Regarding China, similarly, the Biden administration “can’t simply revert to Obama era or Obama administration policies,” said Paul Heer, a former career officer in the CIA, where he was an East Asia specialist. “The region has changed dramatically in the past four years … in ways that will require new strategies and tactics, and frankly probably some reassessment of U.S. interests and goals and aspirations in the region.”

The discussion was the latest installment of MIT’s Starr Forum, a series of events on global affairs sponsored by the Starr Foundation of New York. Richard Samuels, the Ford International Professor of Political Science and director of MIT’s Center for International Studies (CIS), moderated the event.

“Most of our national attention has focused on things domestic in the United States,” said Samuels. “Covid, inequality, insurrection, impeachment, a whole raft of critical issues. It’s a very full plate. And of course in the meantime the world has not stood still, either. Foreign affairs never stopped being [important].”

The four panelists at Wednesday’s event all spent a year at MIT in the past, as

Robert E. Wilhelm Fellows at CIS. The fellowship is filled annually by one person who has held senior positions in public life.

Lourdes Melgar SM ’88, PhD ’92, Mexico’s former deputy secretary of energy for hydrocarbons and under-secretary for electricity, said she would welcome the end of “Mexico-bashing” by a U.S. president, and anticipated a more “orderly approach” to policymaking. Among other changes, Biden has already ordered a halt to construction of the U.S.-Mexico border wall.

And yet, Melgar noted, “the task ahead is daunting” for Mexico and much of Central America, due to the impact of the Covid-19 pandemic. “The economic impact is setting the region back at least over a decade,” she said. Moreover, she added, current Mexican president Andrés Manuel López Obrador, who has a different political orientation than Biden, may resist any U.S. initiatives about anticorruption policy, transparency, or election results that he perceives as being too intrusive. Melgar also forecast that “Mexico will not be a partner” on climate agreements. So, while relations may normalize, productive mutual projects could be hard to realize.

Regarding Israel, another important U.S. partner, the policy objectives are also relatively clear, but the prospects for cooperation and progress are more hazy, said Naomi Chazan — a professor emerita of political science at the Hebrew University of Jerusalem and a former legislator in Israel’s Knesset, as well as the inaugural Robert E. Wilhelm Fellow at CIS during the 2004-05 academic year.

Chazan listed three main policy concerns for the Biden administration: sustaining solid relations with Israel, reviving the 2015 U.S.-Iran nuclear treaty, and working on the Palestinian question. In the first case, Chazan said, Biden has a “real and proven record of support for Israel,” but propsects for broad cooperation with Israel’s right-wing government may be limited. On the Palestinian issue, the Biden administration is already restoring relations with Palestinian leaders, a step toward seeking a two-state solution to the conflict.

Rebuilding the Iran nuclear deal, which significantly cut Iran’s nuclear capabilities, may prove toughest of all. Israel opposed any deal with Iran, and former President Donald Trump withdrew the U.S. from the deal in 2018. Biden “clearly wants to reexamine the deal,” Chazan said, but doing so would complicate U.S. relations.

“This is one issue where the path is very confrontational. It will be very difficult for Biden to deal with this challenge,” Chazan said.

At a glance, India might seem to be yet another country with a right-leaning populist leader — Narendra Modi — who was aligned with Trump and would be at odds with Biden. However, Menon suggested, the Modi-Trump relationship was fairly “transactional” in nature and focused on defense issues. The possibility of cooperation now, he added, is quite reasonable.

“From Delhi, at least, the view is of hope, of broadening relations and moving away from some of the unpredictability” of the past four years, Menon said. “Today we enter the Biden administration, the Biden era, with U.S.-India relations in good shape.”

Still, Menon added, “the issues are not so simple” here, and include India’s worsening relations with China, climate change, and economic issues. Then too, Menon added, “Global health is the other area where, frankly, both countries should do much more” together. In short, the U.S. and India might be able to work together broadly, but this would often involve massive global issues, not strictly bilateral matters.

In China, by contrast, circumstances are quite different after four years of trade battles between the Trump administration and Chinese leaders.

“With regard to East Asia, I think President Biden has a lot of repair and restoration work to do in that region,” said Heer, whose service included a stint as the national intelligence officer for East Asia in the Office of the Director of National Intelligence. He added: “In my view, the Trump presidency has seriously degraded the U.S. role in the region. Although Beijing shares a lot of the responsibility here, I think Trump helped Beijing to escalate the most hostile and confrontational U.S.-China relationship we’ve seen really in 50 years.”

By contrast, Heer said, “I think that Biden is going to revive a more pragmatic, more attentive, and more realistic posture toward the Asia-Pacific.”

Even so, Heer added, the Biden administration is not likely to simply start reversing all of Trump’s China policies; China does have an authoritarian model of governance that the U.S. opposes. Thus, although the U.S. may cooperate with China on climate and global health, “They’re not going to do so at the expense of confronting China on many other issues,” he added.

Across the board, then, the Biden administration faces tasks ranging from reviving relationships with traditional partners, restoring agreements forged in the Obama administration, and tackling our ongoing global crises. It might seem a daunting to-do list, but Heer, for one, was relatively sanguine about the path forward.

“I think the Biden team is fully aware of the nature and the scope of the challenge,” Heer said. “At this point, I’m optimistic.”

When culture clashes with Covid-19