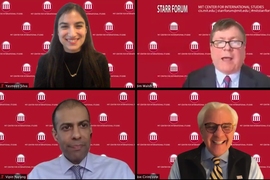 As the Covid-19 pandemic continues to inflict huge damage around the world, international affairs experts are increasingly wondering: Will the virus make countries reconsider their national security strategies? After all, conventional defense capacities have been of limited use against a devastating contagion — and more viruses like Covid-19 may well be out there.

While few people will confidently forecast exactly how the pandemic will alter the world, defense experts have at least started discussing some of its implications for security policy. That conversation continued in an online MIT event on Thursday, “Rethinking National Security in the Age of Pandemics,” as experts from inside and outside the Institute evaluated some key questions driven by the current crisis.

The panel was the latest iteration of MIT’s Starr Forum, a series of events on foreign policy issues held by the Center for International Studies.

For some observers, rethinking security starts with defense spending and budget priorities. For all the trillions spent on military buildups in recent decades, most military functions do not apply to a pandemic.

“Since 9/11, we’ve had a certain mindset on national security,” said Joe Cirincione, president of the Ploughshares Fund, a global security foundation. “The pandemic has fundamentally altered the equation.”

As evidence for a shifting midset in policy circles, Cirincione cited a series of foreign-policy experts who have been calling for a reorientation of security thinking in light of the pandemic. The neoconservative thinker Max Boot, Cirincione noted, recently wrote in The Washington Post that we “have to rethink the whole concept of national security” because “the last 20 years have seen us face these threats that do not have military solutions to them,” including pandemics, climate change, and cybersecurity problems.

Given that annual U.S. spending on nuclear weapons exceeds the amount spent on public health, Cirincione added, there is a clear imperative for changing budget priorities, so the U.S. can “start right now having a savvier 21st century definition of national security.”

Yasmeen Silva, partnerships manager at Beyond the Bomb, an advocacy group against nuclear war, also made a case for significantly altering the approach to U.S. security.

“Due to this misplacement of priorities, we’re seeing that we’re not able to meet the threats of the 21st century that actually make us less safe,” Silva said.

Security, Silva noted, can be measured by “preventable deaths” for “everyday Americans,” and she suggested an array of spending priorities, beyond weapons, to advance that cause — including health care, direct economic relief, aid for workers and communities, and protection for democratic functions. Those things, Silva added, would help the country “move forward in a way that sets an agenda for true safety and security.”

Vipin Narang, an associate professor of political science at MIT and a leading expert in nuclear strategy, said that an effective response to the pandemic would almost certainly require more extensive international collaboration and work.

“There will be a fundamental transformation in how we think about pandemic identification, response, and preparedness, and hopefully, at the global level,” Narang said. “This requires cooperation between China, European partners, the Middle East, India, East Asian countries, the United States, to set up early monitoring capabilities, so that when this happens again … we will be better prepared to identify novel pathogens. And that will require money and cooperation.”

Moreover, Narang said, the nature of a response has to be global, given the virtual impossibility of shuttering international travel and the global links in the economy.

“The idea we could shut the borders and be immune to the virus was mistaken from the beginning,” Narang said.

Narang also identified some short-term implications for national security brought about by the pandemic, such as massive troop illnesses, as seen on the USS Theodore Roosevelt, the aircraft carrier with hundreds of Covid-19 cases on board. Narang also noted that the incapacitation of leaders in nuclear-equipped countries — such as British Prime Minister Boris Johnson, who was hospitalized for Covid-19 this month — might raise tricky defense-leadership issues as well.

While the reorientation of security thinking may have a clear logic to it, actually enacting things like budget changes or support for new policies is no sure thing — as the panelists acknowledged in response to an audience question.

Quoting comments by Rep. Ro Khanna of California, Cirincione said, “This is not something that necessarily happens automatically. Especially in Washington. You’ve got to fight for it.” Silva, for her part, advocated for a “united front” among constituents to pressure Congress for meaningful new directions.

And while there are clear incentives for new international cooperation during pandemics, as well as potentially shifting budget priorities for many countries, international tensions may not necessarily be reduced by the Covid-19 crisis, as Narang noted in response to another audience question.

“I don’t take it for granted that economic shocks necessarily lead to peace,” Narang said. “That’s one argument, to be sure. But there is an alternative argument that you can have diversionary war incentives also, if this economic downturn really starts undermining the legitimacy of some countries and governments.”

Thursday’s Starr Forum event was moderated by Jim Walsh, a research associate in MIT’s Security Studies Program and a leading expert in weapons proliferation and foreign policy. The event drew a virtual crowd of 420 audience members.

Events in the series are ongoing and have been moved to an online format during the Covid-19 crisis, which has led to the temporary closure of the MIT campus.