A teacher’s education in Haiti 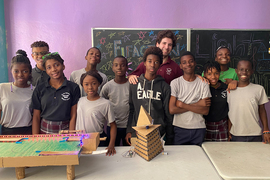 ↓ Download Image
Caption: Mechanical engineering student Eli Brooks taught engineering toy design to children at the Have Faith Haiti Mission & Orphanage in Port-au-Prince, Haiti. Here, Brooks (back row, center) poses with his middle school class before they presented the toys they designed and built, including "FIFAction" on the left and "Light-Up Pyramid" on the right.
Credits: All images: Courtesy of Eli Brooks 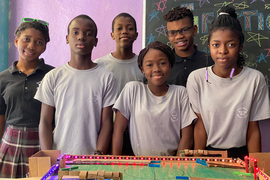 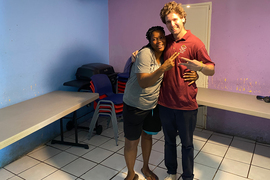 Caption:
Mechanical engineering student, Eli Brooks, taught engineering toy design to children at the Have Faith Haiti Mission & Orphanage in Port-au-Prince, Haiti. Here, Brooks (back row, center) poses with his middle school class before they presented the toys they designed and built, including "FIFAction" on the left and "Light-Up Pyramid" on the right.
Credits:
All images: Courtesy of Eli Brooks

Caption:
Students pose with their toy, "FIFAction,” which was built during a toy design class with MIT student Eli Brooks. Brooks drew inspiration from MIT’s mechanical engineering class 2.00b (Toy Product Design) when teaching his class.
Credits:
All images: Courtesy of Eli Brooks

Eli Brooks was only supposed to stay in Haiti for a few weeks. Like many college students, the mechanical engineering senior’s original plans for the summer of 2020 were scrapped due to the pandemic. He had an opportunity to volunteer at Have Faith Haiti Mission and Orphanage in Port-au-Prince for four weeks. As his month in Haiti was coming to a close, Brooks had a change of heart thanks to a persuasive toddler.

“People were asking me to stay, and it’s pretty hard to say no to a three-year old saying ‘Mr. Eli, can you stay here and teach me?’” recalls Brooks. He decided to take a leave of absence from MIT during the fall 2020 semester and stayed in Haiti for five more months.

The six months Brooks spent in Haiti would be transformative for both him and the children he worked with.

For nearly the entirety of his time at Have Faith Haiti, Brooks remained on the quarter acre plot of land. His bedroom was in a small building in the middle of the playground. The tiny room had no running water or air conditioning, but Brooks was amazed by how quickly the comforts he took for granted back home didn’t seem to matter.

“Within a few days I realized that while this is the hardest place I will ever live, it's also the happiest I've ever been,” he adds.

When Brooks arrived at the orphanage, students had been isolated for six months due to Covid-19. With so many immunocompromised children, there were few visitors – making Brooks’ arrival all the more exciting.

At first, his role was similar to a camp counselor. In the morning, he would set up obstacle courses for the kids and referee water balloon tosses. During the afternoon, he’d teach younger children how to read and discuss books with the older children. It was this experience teaching that ignited a spark in Brooks.

“Once I started teaching kids how to read, I fell in love with it. That’s when I decided to take on more of a teaching role, and I think that was the greatest decision I’ve made, maybe ever,” he recalls. 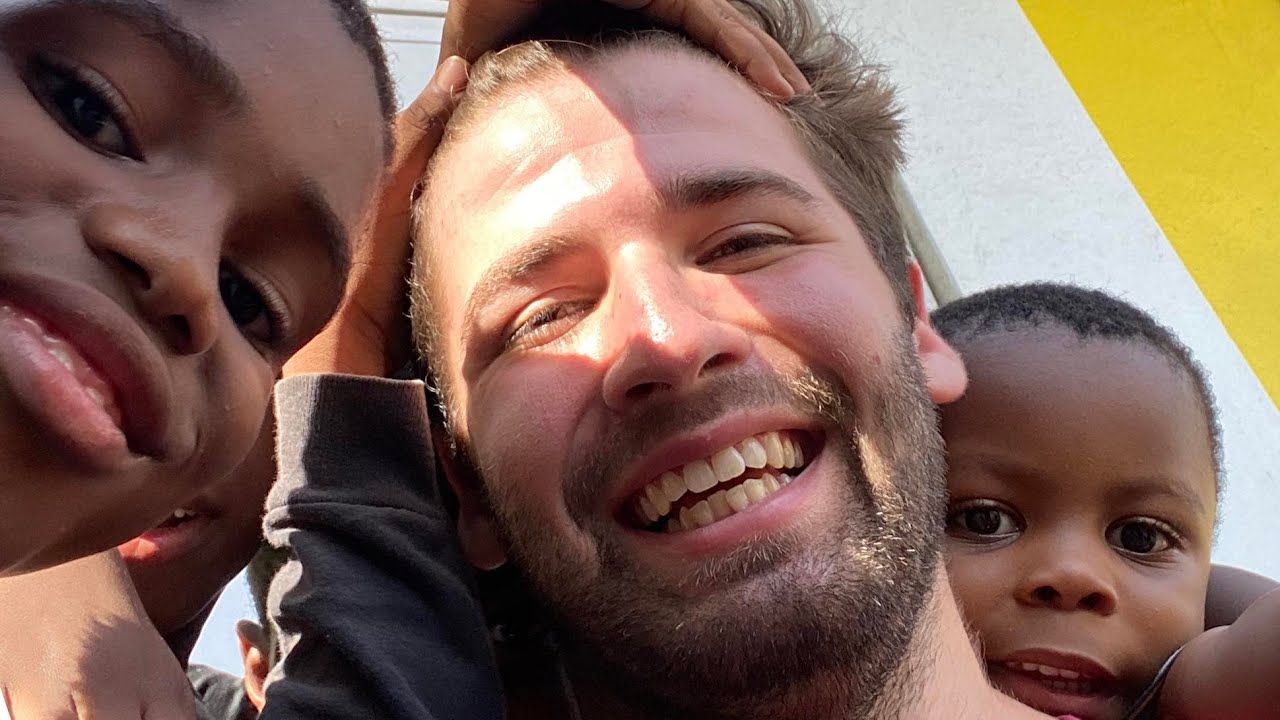 After deciding to stay to teach for five months, Brooks drew upon his experiences in mechanical engineering classes at MIT. He saw an opportunity to replicate class 2.00b (Toy Product Design), when teaching middle school and high school students. Offered to MIT’s first-year students each spring, the class introduces students to product design and the product development process. By the end of the semester, students present a working prototype of a toy.

The first half of the semester, Brooks taught students basic, hands-on engineering skills. He utilized some of the slides developed by Professor David Wallace and Lecturer Joshua Ramos for the class.

“It was amazing to explain what engineering was to these kids and to see that they fell in love with it,” says Brooks.

For the second half of the semester, students pitched toy product ideas. Much like in 2.00b, students would start with dozens of ideas, sketch out the concepts, and narrow it down to the top three. They then built prototypes for the younger children at the orphanage to test out.

While MIT students in 2.00b have access to machinery, electronics, and various materials on campus, Brooks had to make the class work with cardboard, paper, and glue sticks. These limited resources didn’t stifle students’ creativity.

Brooks was inspired by the prototypes students developed by the end of the semester. Projects included a “Live Action FIFA” soccer game and “Mad Ball,” which resembled a typical pinball game. The games were so popular, the younger children at the orphanage played them during Brooks’ going away party.

How to live life a better way

As his time in Haiti came to a close last winter, Brooks reflected on how life-altering the experience was. When he first arrived in Port-au-Prince, he was struggling with what he wanted to do with his life and grappling with his own mental health and happiness.

Seeing how happy the children at Have Faith Haiti were with so few material goods or the comforts he had grown accustomed to gave Brooks an education in happiness.

“I think going there taught me a lot about how to be happy and how to deal with mental health,” he says. “These kids have nothing and they were happier than I was. I really learned just how to live life a better way.”

As he enters in final year at MIT, Brooks is now exploring career paths in teaching. He recently applied to graduate school programs for a master’s in education with a specialization in teaching in the inner city.

Wherever his career takes him, Brooks knows he will find a path back to Haiti someday.

“There is no question I will go back to visit, hopefully someday soon. These people became my friends and family for six months, and the impact they had on my life can’t be overstated,” he adds.

Yo-yos offer a first foray into manufacturing at scale