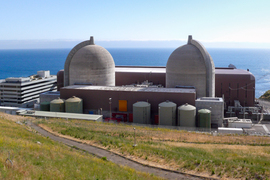 The Diablo Canyon nuclear plant in California, the only one still operating in the state, is set to close in 2025. A team of researchers at MIT’s Center for Advanced Nuclear Energy Systems, Abdul Latif Jameel Water and Food Systems Lab, and Center for Energy and Environmental Policy Research; Stanford’s Precourt Energy Institute; and energy analysis firm LucidCatalyst LLC have analyzed the potential benefits the plant could provide if its operation were extended to 2030 or 2045.

They found that this nuclear plant could simultaneously help to stabilize the state’s electric grid, provide desalinated water to supplement the state’s chronic water shortages, and provide carbon-free hydrogen fuel for transportation. MIT News asked report co-authors Jacopo Buongiorno, the TEPCO Professor of Nuclear Science and Engineering, and John Lienhard, the Jameel Professor of Water and Food, to discuss the group’s findings.

Lienhard: The cost of desalinated water produced at Diablo Canyon would be lower than for a stand-alone plant because the cost of electricity would be significantly lower and you could take advantage of the existing infrastructure for the intake of seawater and the outfall of brine. Electricity would be cheaper because the location takes advantage of Diablo Canyon’s unique capability to provide low cost, zero-carbon baseload power.

Depending on the scale at which the desalination plant is built, you could make a very significant impact on the water shortfalls of state and federal projects in the area. In fact, one of the numbers that came out of this study was that an intermediate-sized desalination plant there would produce more fresh water than the highest estimate of the net yield from the proposed Delta Conveyance Project on the Sacramento River. You could get that amount of water at Diablo Canyon for an investment cost less than half as large, and without the associated impacts that would come with the Delta Conveyance Project.

And the technology envisioned for desalination here, reverse osmosis, is available off the shelf. You can buy this equipment today. In fact, it’s already in use in California and thousands of other places around the world.

Q: You discuss in the report three potential products from the Diablo Canyon plant:  desalinatinated water, power for the grid, and clean hydrogen. How well can the plant accommodate all of those efforts, and are there advantages to combining them as opposed to doing any one of them separately?

Buongiorno: California, like many other regions in the world, is facing multiple challenges as it seeks to reduce carbon emissions on a grand scale. First, the wide deployment of intermittent energy sources such as solar and wind creates a great deal of variability on the grid that can be balanced by dispatchable firm power generators like Diablo. So, the first mission for Diablo is to continue to provide reliable, clean electricity to the grid.

The second challenge is the prolonged drought and water scarcity for the state in general. And one way to address that is water desalination co-located with the nuclear plant at the Diablo site, as John explained.

The third challenge is related to decarbonization the transportation sector. A possible approach is replacing conventional cars and trucks with vehicles powered by fuel cells which consume hydrogen. Hydrogen has to be produced from a primary energy source. Nuclear power, through a process called electrolysis, can do that quite efficiently and in a manner that is carbon-free.

Our economic analysis took into account the expected revenue from selling these multiple products — electricity for the grid, hydrogen for the transportation sector, water for farmers or other local users — as well as the costs associated with deploying the new facilities needed to produce desalinated water and hydrogen. We found that, if Diablo’s operating license was extended until 2035, it would cut carbon emissions by an average of 7 million metric tons a year — a more than 11 percent reduction from 2017 levels — and save ratepayers $2.6 billion in power system costs.

Further delaying the retirement of Diablo to 2045 would spare 90,000 acres of land that would need to be dedicated to renewable energy production to replace the facility’s capacity, and it would save ratepayers up to $21 billion in power system costs.

Finally, if Diablo was operated as a polygeneration facility that provides electricity, desalinated water, and hydrogen simultaneously, its value, quantified in terms of dollars per unit electricity generated, could increase by 50 percent.

Lienhard: Most of the desalination scenarios that we considered did not consume the full electrical output of that plant, meaning that under most scenarios you would continue to make electricity and do something with it, beyond just desalination. I think it’s also important to remember that this power plant produces 15 percent of California’s carbon-free electricity today and is responsible for 8 percent of the state’s total electrical production. In other words, Diablo Canyon is a very large factor in California’s decarbonization. When or if this plant goes offline, the near-term outcome is likely to be increased reliance on natural gas to produce electricity, meaning a rise in California’s carbon emissions.

Q: This plant in particular has been highly controversial since its inception. What’s your assessment of the plant’s safety beyond its scheduled shutdown, and how do you see this report as contributing to the decision-making about that shutdown?

Buongiorno: The Diablo Canyon Nuclear Power Plant has a very strong safety record. The potential safety concern for Diablo is related to its proximity to several fault lines. Being located in California, the plant was designed to withstand large earthquakes to begin with. Following the Fukushima accident in 2011, the Nuclear Regulatory Commission reviewed the plant’s ability to withstand external events (e.g., earthquakes, tsunamis, floods, tornadoes, wildfires, hurricanes) of exceptionally rare and severe magnitude. After nine years of assessment the NRC’s conclusion is that “existing seismic capacity or effective flood protection [at Diablo Canyon] will address the unbounded reevaluated hazards.” That is, Diablo was designed and built to withstand even the rarest and strongest earthquakes that are physically possible at this site.

As an additional level of protection, the plant has been retrofitted with special equipment and procedures meant to ensure reliable cooling of the reactor core and spent fuel pool under a hypothetical scenario in which all design-basis safety systems have been disabled by a severe external event.

Lienhard: As for the potential impact of this report, PG&E [the California utility] has already made the decision to shut down the plant, and we and others hope that decision will be revisited and reversed. We believe that this report gives the relevant stakeholders and policymakers a lot of information about options and value associated with keeping the plant running, and about how California could benefit from clean water and clean power generated at Diablo Canyon. It’s not up to us to make the decision, of course — that is a decision that must be made by the people of California. All we can do is provide information.

Q: What are the biggest challenges or obstacles to seeing these ideas implemented?

Lienhard: California has very strict environmental protection regulations, and it's good that they do. One of the areas of great concern to California is the health of the ocean and protection of the coastal ecosystem. As a result, very strict rules are in place about the intake and outfall of both power plants and desalination plants, to protect marine life. Our analysis suggests that this combined plant can be implemented within the parameters prescribed by the California Ocean Plan and that it can meet the regulatory requirements.

We believe that deeper analysis would be needed before you could proceed. You would need to do site studies and really get out into the water and look in detail at what’s there. But the preliminary analysis is positive. A second challenge is that the discourse in California around nuclear power has generally not been very supportive, and similarly some groups in California oppose desalination. We expect that that both of those points of view would be part of the conversation about whether or not to procede with this project.

Q: How particular is this analysis to the specifics of this location? Are there aspects of it that apply to other nuclear plants, domestically or globally?

Lienhard: Hundreds of nuclear plants around the world are situated along the coast, and many are in water stressed regions. Although our analysis focused on Diablo Canyon, we believe that the general findings are applicable to many other seaside nuclear plants, so that this approach and these conclusions could potentially be applied at hundreds of sites worldwide.

Paper: "An Assessment of the Diablo Canyon Nuclear Plant for Zero-Carbon Electricity, Desalination, and Hydrogen Production"

The Washington Post Editorial Board highlights a new report co-authored by MIT researchers that finds keeping the Diablo Canyon nuclear power plant in California open would help the state reach its climate goals. "The experts project that keeping Diablo Canyon open just one more decade would cut California’s power-sector emissions by more than 10 percent, because it would burn far less gas, and save the state $2.6 billion in power system costs."

Los Angeles Times reporter Rob Nikolewski spotlights a report by researchers from MIT and Stanford University that finds keeping the Diablo Canyon Power Plant in California running would reduce electricity costs and help the state achieve its climate goals. “Nuclear plants – and Diablo Canyon is no exception – are one such clean and firm [source of] power capacity that we think should be preserved,” says Prof. Jacopo Buongiorno.

Forbes reporter Ken Silverstein highlights a joint study by MIT and Stanford researchers that finds that extending the California Diablo Canyon Power Plant will save customers billions while reducing carbon emissions. The researchers found that “if the plant stayed operational from 2025 to 2035,” writes Silverstein, “CO2 levels would drop by 10% a year and displace natural gas use, saving customers $2.6 billion.”

A new report by researchers from MIT, Stanford and other institutions finds that extending the life of the Diablo Canyon nuclear power plant in California should help the state meet its climate goals, reports Timothy Gardner for Reuters. The researchers found “delaying closure of the plant to 2025 would reduce California's carbon emissions from power plants by more than 10% from 2017 levels, reduce dependency on natural gas, and save up to $21 billion in power system costs.”

After 40 years at MIT, including eight as its senior academic officer, Schmidt will return to lead his undergraduate alma mater.