Giving the people what they want? 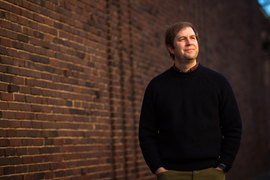 Caption:
Research by MIT political scientist Devin Caughey shows that over time, elected politicians in the U.S. are generally responsive to the opinions of voters.
Credits:
Image: Gretchen Ertl

At times it can feel like public opinion does not matter in U.S. politics. When the U.S. Congress or state legislatures ignore issues that have broad public support, there seems to be a glaring gap between what people want and what politicians will deliver.

But in due course, public opinion does sway elected officials, according to MIT political scientist Devin Caughey. Indeed, Caughey’s work has shown that at the state level in the U.S. over the last several decades, government policies have followed public views — often incrementally, but consistently.

“Over the long term, policymaking tends to be responsive to public opinion and move into alignment with what the public wants,” says Caughey. That has become more apparent due to innovative research Caughey and his colleagues have performed while using thousands of public-opinion opinion surveys from the 1930s onward.

But Caughey, who calls himself “a political scientist who studies historical things,” has also found the power of public opinion at work at the federal level. In his 2018 book “The Unsolid South,” published by the Princeton University Press, Caughey explores the varieties of Southern responses to the New Deal, showing how public attitudes about it varied across time and place, with Washington following suit.

Now Caughey, along with political scientist Chris Warshaw of George Washington University, is working on another large book project, “Dynamic Democracy: Citizens, Parties, and Policymakers in the American State,” about their state-level findings. On either scale, the research shows something important: Democracy works, albeit in fits and starts.

Yes, at any given moment, Caughey notes, “Policies are often mismatched with public opinion. A majority of the public may want a minimum wage of $15, but the minimum wage is $7. It happens a lot, for a variety of reasons. Then gradually the match improves. And then often polling stops, because the issues that are in alignment aren’t as controversial any more.”

Caughey hails from California, but attended high school in Pennsylvania. As an undergraduate at Yale University, he received his BA in history, mostly focusing on  Latin America and ancient Greece. But in his senior year, a seminar with political scientist David Mayhew, a leading scholar of Congress, sparked Caughey’s interest. Caughey entered a master’s program at Cambridge University, receiving an MPhil in history while writing a thesis on the New Deal and the South. Finally he pursued a PhD in political science at the University of California at Berkeley.

“I was interested in representation, the relationship between public opinion, what the people say they want, and what elites are doing, members of Congress in particular,” Caughey says. His thesis at Berkeley became the foundation for “The Unsolid South.” Caughey received his PhD in 2012 and joined MIT later that year. Now an associate professor, he was awarded tenure in 2020.

Caughey’s research at MIT has had three fronts: his work on the South and the New Deal; his research on state-level politics; and methodological work about polling data. On the last subject, Caughey and six colleagues published a short monograph in 2020 about extracting useful data from older surveys.

By contrast, “The Unsolid South” blended both political science and history to update received thinking about the South in the 1930s and 1940s.

“The conventional wisdom was and perhaps still is that Southern members of Congress were essentially unresponsive to public opinion,” Caughey says. With many of them assured of reelection, and with nearly all Black Southerners disenfranchised, the idea goes, U.S. representatives could ignore their constituents.

Ultimately “The Unsolid South” spoke to both political scientists and historians by highlighting how the New Deal coalition shrunk once its measures seemed likely to help Black people. In addition to winning the American Political Science Association’s award for best book on parties and political organizations, Caughey’s book received an honorable mention from the Social Science History Association.

“That for me was really gratifying, that it was speaking to a broader audience,” Caughey says.

A full picture of politics

At present, Caughey is focused on the “Dynamic Democracy” project, in which he and Warshaw scrutinize all states from 1936 to 2014.

The project explores many intricacies regarding public opinion. Passing legislation, for one thing, can itself help solidify the public popularity of certain ideas.

“Initially Social Security was fairly popular when it was first passed [in the 1930s], but not overwhelmingly popular,” Caughey says. “But once people got Social Security, it became very, very popular.”

Public opinion also limits state-level policy radicalism by hovering in the political middle: “When policy moves to the right, it increases the number of people who thinks it should move back to the left again, and vice versa,” Caughey observes.

There is one way that political parties can get around the restraining force of public opinion: gerrymandering, which lets parties perpetuate their hold on legislatures.

Caughey and Warshaw are not taking a panglossian view of U.S. politics. Of the 1930s, Caughey says, “I don’t like to call the one-party South a democracy, because it had a number of features like the disenfranchisement of a big part of the population.”

He emphasizes the “gradations between authoritarianism and democracy. There are some democracies that don’t work quite right, that have some authoritarian features even today. But there are also a lot of authoritarian regimes that have democratic-like features and they’re not just window dressing; they do change the incentives of elites. Exploring that gray area has become a core part of the book.”

But given an appropriate level of critical thinking, Caughey’s research still suggests that democracy reflects the will of the people, over time.

“The message we’re trying to drive home in this book is that when you take a longer-term view of representation, things look better than when you look in the short term,” Caughey says. “In some ways our work is relatively optimistic about this subject.”

Why the “solid South” of midcentury U.S. politics was not so solid