A stealthy way to combat tumors 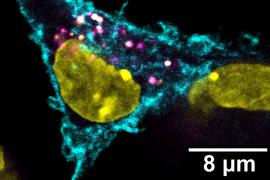 ↓ Download Image
Caption: MIT researchers have identified a specialized subset of dendritic cells that help stimulate T cells to attack tumors. In this image, the blue represents a protein found on dendritic cell surfaces, and the purple stain reveals tumor proteins that the dendritic cell uses to “disguise” itself as a tumor cell. Cell nuclei are labeled in yellow.
Credits: Image: Ellen Duong and Tim Fessenden

Caption:
MIT researchers have identified a specialized subset of dendritic cells that help stimulate T cells to attack tumors. In this image, the blue represents a protein found on dendritic cell surfaces, and the purple stain reveals tumor proteins that the dendritic cell uses to “disguise” itself as a tumor cell. Cell nuclei are labeled in yellow.
Credits:
Image: Ellen Duong and Tim Fessenden

Under the right circumstances, the body’s T cells can detect and destroy cancer cells. However, in most cancer patients, T cells become disarmed once they enter the environment surrounding a tumor.

Scientists are now trying to find ways to help treat patients by jumpstarting those lackluster T cells. Much of the research in this field, known as cancer immunotherapy, has focused on finding ways to stimulate those T cells directly. MIT researchers have now uncovered a possible new way to indirectly activate those T cells, by recruiting a population of helper immune cells called dendritic cells.

In a new study, the researchers identified a specific subset of dendritic cells that have a unique way of activating T cells. These dendritic cells can cloak themselves in tumor proteins, allowing them to impersonate cancer cells and trigger a strong T cell response.

“We knew that dendritic cells are incredibly important for the antitumor immune response, but we didn’t know what really constitutes the optimal dendritic cell response to a tumor,” says Stefani Spranger, the Howard S. and Linda B. Stern Career Development Professor at MIT and a member of MIT’s Koch Institute for Integrative Cancer Research.

The results suggest that finding ways to stimulate that specific population of dendritic cells could help to enhance the effectiveness of cancer immunotherapy, she says. In a study of mice, the researchers showed that stimulating these dendritic cells slowed the growth of melanoma and colon tumors.

Spranger is the senior author of the study, which appears today in the journal Immunity. The lead author of the paper is MIT graduate student Ellen Duong.

When tumors begin to form, they produce cancerous proteins that T cells recognize as foreign. This sometimes allows T cells to eliminate tumors before they get very large. In other cases, tumors are able to secrete chemical signals that deactivate T cells, allowing the tumors to continue growing unchecked.

To do that, they found a tumor cell line, from a type of muscle tumor, that has been shown to spontaneously regress in mice. Such cell lines are difficult to find because researchers usually don’t keep them around if they can’t form tumors, Spranger says.

Studying mice, they compared tumors produced by that regressive cell line with a type of colon carcinoma, which forms tumors that grow larger after being implanted in the body. The researchers found that in the progressing tumors, the T cell response quickly became exhausted, while in the regressing tumors, T cells remained functional.

The researchers then analyzed the dendritic cell populations that were present in each of these tumors. One of the main functions of dendritic cells is to take up debris from dying cells, such as cancer cells or cells infected with a pathogen, and then present the protein fragments to T cells, alerting them to the infection or tumor.

The best-known type of dendritic cells required for antitumor immunity  are DC1 cells, which interact with T cells that are able to eliminate cancer cells. However, the researchers found that DC1 cells were not needed for tumor regression. Instead, using single-cell RNA sequencing technology, they identified a previously unknown activation state of DC2 cells, a different type of dendritic cell, that was driving T cell activation in the regressing tumors.

Some types of interferon have been used to help treat cancer, but it can have widespread side effects when given systemically. The findings from this study suggest that it could be beneficial to deliver interferon in a very targeted way to tumor cells, or to use a drug that would provoke tumor cells to produce type I interferon, Spranger says.

The researchers now plan to investigate just how much type I interferon is needed to generate a strong T cell response. Most tumor cells produce a small amount of type I interferon but not enough to activate the dendritic cell population that invigorates T cells. On the other hand, too much interferon can be toxic to cells.

“Our immune system is hardwired to respond to nuanced differences in type I interferon very dramatically, and that is something that is intriguing from an immunological perspective,” Spranger says.

The research was funded by the Koch Institute Support (core) Grant from the National Cancer Institute, a National Institutes of Health Pre-Doctoral Training Grant, a David H. Koch Graduate Fellowship, and the Pew-Steward Fellowship.