Q&A: David Autor on the long afterlife of the “China shock” 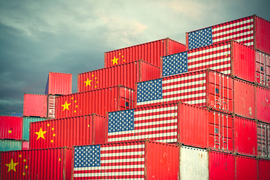 In 2001, the U.S. normalized long-term trade relations with China, and China joined the World Trade Organization — moves many expected to help both economies. Instead, over the next several years, inexpensive imports from China significantly undercut U.S. manufacturing, especially in industries such as textiles and furniture-making. By 2011, this “China shock” from trade was responsible for the loss of 1 million U.S. manufacturing jobs, and 2.4 million jobs overall. Many locales were especially hard hit, especially in the South Atlantic and Deep South regions. So, while consumers nationally benefitted from slightly cheaper goods, workers in many places had their livelihoods devastated. That was the attention-grabbing finding of a 2013 paper by MIT economist David Autor and his colleagues David Dorn and Gordon Hanson.

Now Autor, Dorn, and Hanson have a follow-up paper, “The Persistence of the China Shock,” forthcoming in the Brookings Review, about the long-term effects of the China shock. They find that trade pressure from Chinese imports leveled out after 2011 — yet the hardest-hit U.S. areas have not bounced back from the rapid declines they suffered. MIT News spoke to Autor, the Ford Professor of Economics at MIT, about the new findings.

Q: The “China shock” was devastating to some local and regional U.S. economies, from 2001 through 2011. What did you find about subsequent years?

A: The China shock, when we first wrote about it, was ongoing, and China continued to gain market share in the U.S. [We have now found] the China shock plateaued around 2010-2012. In the decade since then, did places rebound? Unfortunately, places that lost manufacturing employment have seen a persistently deteriorated level of overall employment-to-population ratio and of earnings, while rates of dependency on transfer benefits have risen. Economists have made the phrase “creative destruction” famous. We’ve seen the destruction but not the creative rebound yet.

Q: Why did the China trade shock persist so much in some particular places?

A: One of the things that was puzzling about the China trade shock is that when the going got tough, very few people got going. We didn’t see people picking up and moving to better opportunities, as in historical narratives of U.S. resiliency. The one group that tended to move out more was young adults, which is logical since they are generally more mobile and arguably have the most to gain. We also know as a background fact that education levels of metro areas are a very strong predictor of economic resiliency. The more-educated places tend to be able to reinvent themselves, though often not with the same beneficiaries. Pittsburgh has reinvented itself — it used to be a steel town, now it’s a center for health care and tech. But it’s probably not former steel workers, primarily, who are doing that work. Overall, the picture is discouraging.

Q: You point out in this paper that this is not the only large-scale shock we’ve seen, and we should be prepared for other economic shocks. Isn’t another implication of your work that the U.S. economy, at least to some extent, moves from shock to shock, and we should think about what happens in those conditions?

A: Yes. For example, because of the move to cleaner energy sources, employment in U.S. coal production has fallen by 80 percent since 1979. We find that places that are more severely adversely affected don’t tend to come back quickly. With coal in West Virginia, you could say, “Look, there are so few people affected any more. It’s less than a hundred thousand. Why are we so sentimental about this? What’s the big deal?” And the answer is, those people are in just a few places, and they’re really hurting. There’s not something equally good that miners can do to get equal pay or equal esteem in the community. This holds a lesson for what’s ahead. The [renewable] energy transition will create a lot of new work and will be highly investment-intensive, but with different technologies in different places, and it does mean again there will be concentrated losses.

The geographic concentration is what makes these things particularly pernicious — the fact that it all happens in one place at one time. U.S. domestic furniture manufacturing was basically run over by China trade. Not high-end bespoke furniture, but the commodity items you get at Walmart or Target are now made in China or Vietnam.

By contrast, office computing over the last couple of decades has hollowed out the ranks of administrative support positions, but these are not really similar [problems] because that’s one occupation in many businesses which have not gone belly-up. A category of worker is in lower demand, but it’s not like we say, “Oh my God, Topeka used to be the administrative support capital of America.” There’s no such thing. Whereas China trade made American furniture manufacturing businesses not viable. And it’s not just the woodworkers who lose their jobs, it’s office support people, it’s financial people, it’s the effects on transportation, everything.

Q: This paper is about China, too. You note that China was expanding its manufacturing when it gained access to U.S. markets, and the impact was greater because of that. So, we can’t just roll back the clock or reverse our policies — the U.S. manufacturing losses were due to those circumstances.

A: That particular battle has ended. You can say we lost it, or it’s a truce, or that they gained some territory and we held the line, but that battle is over. The nature of competition between U.S. and China has changed since that time. This is now a great power competition around military power, semiconductors, electric cars, energy generation, aircraft and helicopters, telecommunications equipment, and that’s not about jobs [in the same way]. It’s about who gets to be Apple, Boeing, and Intel, and not about about the number of people employed in a small town crafting shoes or knocking together furniture.

The forward-looking lesson is not about how we contend with manufacturing competition. It is not even [only] about trade per se, but about adjustment for unemployed workers and hard-hit areas. How costly it is, how slow it is, and how we can make it work better. Because we’re not done with it. If China’s exports were encased in lucite tomorrow, we’d still have lots of economic shocks going forward.

Q: All right, then what are the best policy steps for helping the people and places affected by these kinds of shocks?

A: I think there are different levels of policy. Knowing what we know now, I would have done China trade policy more gradually. Also, we ought to have much better economic adjustment assistance in place. The U.S. spends an order of magnitude less of GDP in what we call active labor market policies. Denmark spends about 3 percent of GDP on that. We spend about 0.3 percent of GDP on it. Denmark has very fluid labor markets. You can terminate most workers in Denmark for almost any reason, and people don’t expect to keep lifetime jobs. But the state is heavily involved in retraining and reactivating.

A second angle of attack is place-based policy, but we’re not very good at this. There are enterprise zones, which give money to wealthy developers to do things they would do anyway. Subsidized training, and [policies] that stimulate employers to create local jobs sometimes work. It’s not that places can’t be reinvented. But we don’t have an off-the-shelf tool kit for that.

Another approach is targeting investments and interventions on people who need a leg up in the labor market. I’m working on a number of experiments about this: One is on reducing overuse of criminal background checks, another is on a high-intensity STEM training program for people without college degrees, another is attempting to change the quality of jobs in home health care delivery.  Fewer than four in 10 American adults have a four-year college degree, and there’s a budding interest in trying to get employers to reduce credentialism, as a way of improving access to family-supporting jobs.

So, one level is about trade and policy. One is about adjustment systems. A third is about place-based policy. And a fourth is interventions to improve labor market opportunity for people without college degrees.

Paper: “On the Persistence of the China Shock”

Profs. Daron Acemoglu and David Autor speak with New York Times correspondent Thomas B. Edsall about the forces driving working-class voters towards the Republican party. “Elites are making choices that are not good news for non-college workers,” said Acemoglu. “In fact, they are bad news for most workers.”

Bloomberg Businessweek reporter Shawn Donnan spotlights Prof. David Autor’s series of research papers examining the impact of the surge of Chinese imports on the overall American economy and specific regions of the country. Autor and his colleagues make the case that “well-funded, targeted government policies could have helped prevent the economic blight that engulfed many affected communities.”