A new study confirms that as atoms are chilled and squeezed to extremes, their ability to scatter light is suppressed.
Jennifer Chu | MIT News Office
Publication Date:
Press Inquiries 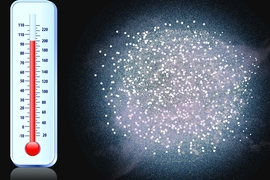 ↓ Download Image
Caption: A new study confirms that as atoms are chilled and squeezed to extremes, their ability to scatter light is suppressed.
Credits: Image: Christine Daniloff, MIT 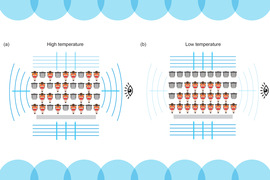 ↓ Download Image
Caption: The principle of Pauli blocking can be illustrated by an analogy of people filling seats in an arena. Each person represents an atom, while each seat represents a quantum state. At high temperatures (a), atoms are seated randomly, so every particle can scatter light. At low temperatures (b), atoms crowd together. Only those with more room near the edge can scatter light.
Credits: Credit: Courtesy of the researchers 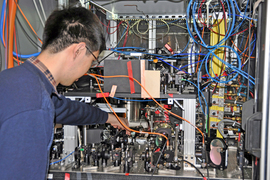 Caption:
The principle of Pauli blocking can be illustrated by an analogy of people filling seats in an arena. Each person represents an atom, while each seat represents a quantum state. At high temperatures (a), atoms are seated randomly, so every particle can scatter light. At low temperatures (b), atoms crowd together. Only those with more room near the edge can scatter light.
Credits:
Credit: Courtesy of the researchers

An atom’s electrons are arranged in energy shells. Like concertgoers in an arena, each electron occupies a single chair and cannot drop to a lower tier if all its chairs are occupied. This fundamental property of atomic physics is known as the Pauli exclusion principle, and it explains the shell structure of atoms, the diversity of the periodic table of elements, and the stability of the material universe.

Now, MIT physicists have observed the Pauli exclusion principle, or Pauli blocking, in a completely new way: They’ve found that the effect can suppress how a cloud of atoms scatters light.

Normally, when photons of light penetrate a cloud of atoms, the photons and atoms can ping off each other like billiard balls, scattering light in every direction to radiate light, and thus make the cloud visible. However, the MIT team observed that when atoms are supercooled and ultrasqueezed, the Pauli effect kicks in and the particles effectively have less room to scatter light. The photons instead stream through, without being scattered.

In their experiments, the physicists observed this effect in a cloud of lithium atoms. As they were made colder and more dense, the atoms scattered less light and became progressively dimmer. The researchers suspect that if they could push the conditions further, to temperatures of absolute zero, the cloud would become entirely invisible.

The team’s results, reported today in Science, represent the first observation of Pauli blocking’s effect on light-scattering by atoms. This effect was predicted 30 years ago but not observed until now.

“Pauli blocking in general has been proven, and is absolutely essential for the stability of the world around us,” says Wolfgang Ketterle, the John D. Arthur Professor of Physics at MIT. “What we’ve observed is one very special and simple form of Pauli blocking, which is that it prevents an atom from what all atoms would naturally do: scatter light. This is the first clear observation that this effect exists, and it shows a new phenomenon in physics.”

When Ketterle came to MIT as a postdoc 30 years ago, his mentor, David Pritchard, the Cecil and Ida Green Professor of Physics, made a prediction that Pauli blocking would suppress the way certain atoms known as fermions scatter light.

His idea, broadly speaking, was that if atoms were frozen to a near standstill and squeezed into a tight enough space, the atoms would behave like electrons in packed energy shells, with no room to shift their velocity, or position. If photons of light were to stream in, they wouldn’t be able to scatter.

“An atom can only scatter a photon if it can absorb the force of its kick, by moving to another chair,” explains Ketterle, invoking the arena seating analogy. “If all other chairs are occupied, it no longer has the ability to absorb the kick and scatter the photon. So, the atoms become transparent.”

“This phenomenon had never been observed before, because people were not able to generate clouds that were cold and dense enough,” Ketterle adds.

In recent years, physicists including those in Ketterle’s group have developed magnetic and laser-based techniques to bring atoms down to ultracold temperatures. The limiting factor, he says, was density.

“If the density is not high enough, an atom can still scatter light by jumping over a few chairs until it finds some room,” Ketterle says. “That was the bottleneck.”

In their new study, he and his colleagues used techniques they developed previously to first freeze a cloud of fermions — in this case, a special isotope of lithium atom, which has three electrons, three protons, and three neutrons. They froze a cloud of lithium atoms down to 20 microkelvins, which is about 1/100,000 the temperature of interstellar space.

“We  then used a tightly focused laser to squeeze the ultracold atoms to record densities, which reached about a quadrillion atoms per cubic centimeter,” Lu explains.

The researchers then shone another laser beam into the cloud, which they carefully calibrated so that its photons would not heat up the ultracold atoms or alter their density as the light passed through. Finally, they used a lens and camera to capture and count the photons that managed to scatter away.

“We’re actually counting a few hundred photons, which is really amazing,” Margalit says. “A photon is such a little amount of light, but our equipment is so sensitive that we can see them as a small blob of light on the camera.”

At progressively colder temperatures and higher densities, the atoms scattered less and less light, just as Pritchard’s theory predicted. At their coldest, at around 20 microkelvin, the atoms were 38 percent dimmer, meaning they scattered 38 percent less light than less cold, less dense atoms.

“This regime of ultracold and very dense clouds has other effects that could possibly deceive us,” Margalit says. “So, we spent a few good months sifting through and putting aside these effects, to get the clearest measurement.”

Now that the team has observed Pauli blocking can indeed affect an atom’s ability to scatter light, Ketterle says this fundamental knowledge may be used to develop materials with suppressed light scattering, for instance to preserve data in quantum computers.

This research was funded, in part, by the National Science Foundation and the Department of Defense. Related work by teams from the University of Colorado and the University of Otago appears in the same issue of Science.

A number of MIT researchers were named as top ten finalists for the Physics World 2021 Breakthrough of the Year. Prof. Wolfgang Ketterle and his colleagues were honored for their work in “independently observing Pauli blocking in ultracold gases of fermionic atoms” and astronomers with the Event Horizon Telescope Collaboration were honored for “creating the first image showing the polarization of light in the region surrounding a supermassive black hole.”

Scientists from MIT have observed a quantum effect that blocks ultracold atoms from scattering light, reports Emily Conover for Science News. To observe the effect, the researchers “beamed light through a cloud of lithium atoms, measuring the amount of light it scattered,” writes Conover. “Then, the team decreased the temperature to make the atoms fill up the lowest energy states, suppressing the scattering of light.”

A new study by MIT scientists has uncovered evidence of Pauli blocking, confirming that as atoms are chilled and squeezed to extremes their ability to scatter light is suppressed, reports Leah Crane for New Scientist. “This is a very basic phenomenon, but it’s sort of a devil to see,” explains former MIT postdoc Yair Margalit. “You need these extreme conditions to be able to see it – high densities and ultra-low temperatures – and it is difficult to get both of these at once.”