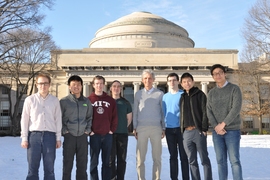 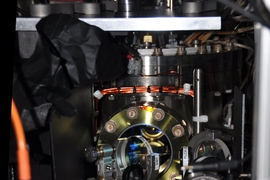 ↓ Download Image
Caption: Equipment used by the Ketterle group to create a supersolid.
Credits: Photo courtesy of the researchers

Caption:
This image shows the equipment used by the Ketterle group to create a supersolid.
Credits:
Photo courtesy of the researchers

MIT physicists have created a new form of matter, a supersolid, which combines the properties of solids with those of superfluids.

By using lasers to manipulate a superfluid gas known as a Bose-Einstein condensate, the team was able to coax the condensate into a quantum phase of matter that has a rigid structure — like a solid — and can flow without viscosity — a key characteristic of a superfluid. Studies into this apparently contradictory phase of matter could yield deeper insights into superfluids and superconductors, which are important for improvements in technologies such as superconducting magnets and sensors, as well as efficient energy transport. The researchers report their results this week in the journal Nature.

“It is counterintuitive to have a material which combines superfluidity and solidity,” says team leader Wolfgang Ketterle, the John D. MacArthur Professor of Physics at MIT. “If your coffee was superfluid and you stirred it, it would continue to spin around forever.”

Physicists had predicted the possibility of supersolids but had not observed them in the lab. They theorized that solid helium could become superfluid if helium atoms could move around in a solid crystal of helium, effectively becoming a supersolid. However, the experimental proof remained elusive.

The team used a combination of laser cooling and evaporative cooling methods, originally co-developed by Ketterle, to cool atoms of sodium to nanokelvin temperatures. Atoms of sodium are known as bosons, for their even number of nucleons and electrons. When cooled to near absolute zero, bosons form a superfluid state of dilute gas, called a Bose-Einstein condensate, or BEC.

Ketterle co-discovered BECs — a discovery for which he was recognized with the 2001 Nobel Prize in physics.

“The challenge was now to add something to the BEC to make sure it developed a shape or form beyond the shape of the ‘atom trap,’ which is the defining characteristic of a solid,” explains Ketterle.

Flipping the spin, finding the stripes

To create the supersolid state, the team manipulated the motion of the atoms of the BEC using laser beams, introducing “spin-orbit coupling.”

In their ultrahigh-vacuum chamber, the team used an initial set of lasers to convert half of the condensate’s atoms to a different quantum state, or spin, essentially creating a mixture of two Bose-Einstein condensates. Additional laser beams then transferred atoms between the two condensates, called a “spin flip.”

Physicists had predicted that a spin-orbit coupled Bose-Einstein condensate would be a supersolid due to a spontaneous “density modulation.” Like a crystalline solid, the density of a supersolid is no longer constant and instead has a ripple or wave-like pattern called the “stripe phase.”

“The hardest part was to observe this density modulation,” says Junru Li, an MIT graduate student who worked on the discovery. This observation was accomplished with another laser, the beam of which was diffracted by the density modulation. “The recipe for the supersolid is really simple,” Li adds, “but it was a big challenge to precisely align all the laser beams and to get everything stable to observe the stripe phase.”

Mapping out what is possible in nature

Currently, the supersolid only exists at extremely low temperatures under ultrahigh-vacuum conditions. Going forward, the team plans to carry out further experiments on supersolids and spin-orbit coupling, characterizing and understanding the properties of the new form of matter they created.

“With our cold atoms, we are mapping out what is possible in nature,” explains Ketterle. “Now that we have experimentally proven that the theories predicting supersolids are correct, we hope to inspire further research, possibly with unanticipated results.”

Several research groups were working on realizing the first supersolid. In the same issue of Nature, a group in Switzerland reported an alternative way of turning a Bose-Einstein condensate into a supersolid with the help of mirrors, which collected laser light scattering by the atoms. “The simultaneous realization by two groups shows how big the interest is in this new form of matter,” says Ketterle.

This research was funded by the National Science Foundation, the Air Force Office for Scientific Research, and the Army Research Office.