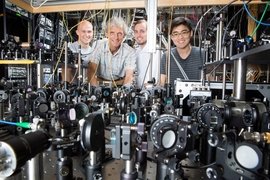 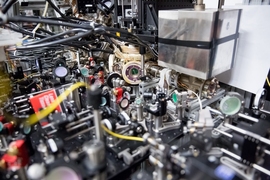 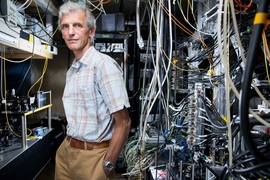 ↓ Download Image
Caption: MIT Professor Wolfgang Ketterle is an expert in trapping and cooling atoms to temperatures close to absolute zero. In 2001 he received a share of the Nobel Prize in physics for achieving Bose–Einstein condensation in dilute gases.
Credits: Bryce Vickmark

Caption:
MIT Professor Wolfgang Ketterle is an expert in trapping and cooling atoms to temperatures close to absolute zero. In 2001 he received a share of the Nobel Prize in physics for achieving Bose–Einstein condensation in dilute gases.
Credits:
Photo: Bryce Vickmark

MIT physicists have created a superfluid gas, the so-called Bose-Einstein condensate, for the first time in an extremely high magnetic field. The magnetic field is a synthetic magnetic field, generated using laser beams, and is 100 times stronger than that of the world’s strongest magnets. Within this magnetic field, the researchers could keep a gas superfluid for a tenth of a second — just long enough for the team to observe it. The researchers report their results this week in the journal Nature Physics.

A superfluid is a phase of matter that only certain liquids or gases can assume, if they are cooled to extremely low temperatures. At temperatures approaching absolute zero, atoms cease their individual, energetic trajectories, and start to move collectively as one wave.

Superfluids are thought to flow endlessly, without losing energy, similar to electrons in a superconductor. Observing the behavior of superfluids therefore may help scientists improve the quality of superconducting magnets and sensors, and develop energy-efficient methods for transporting electricity.

But superfluids are temperamental, and can disappear in a flash if atoms cannot be kept cold or confined. The MIT team combined several techniques in generating ultracold temperatures, to create and maintain a superfluid gas long enough to observe it at ultrahigh synthetic magnetic fields.

“Going to extremes is the way to make discoveries,” says team leader Wolfgang Ketterle, the John D. MacArthur Professor of Physics at MIT. “We use ultracold atoms to map out and understand the behavior of materials which have not yet been created. In this sense, we are ahead of nature.”

Ketterle’s team members include graduate students Colin Kennedy, William Cody Burton, and Woo Chang Chung, all of whom are associates of MIT's Research Laboratory of Electronics.

A superfluid with loops

The team first used a combination of laser cooling and evaporative cooling methods, originally co-developed by Ketterle, to cool atoms of rubidium to nanokelvin temperatures. Atoms of rubidium are known as bosons, for their even number of nucleons and electrons. When cooled to near absolute zero, bosons form what’s called a Bose-Einstein condensate — a superfluid state that was first co-discovered by Ketterle, and for which he was ultimately awarded the 2001 Nobel Prize in physics.

After cooling the atoms, the researchers used a set of lasers to create a crystalline array of atoms, or optical lattice. The electric field of the laser beams creates what’s known as a periodic potential landscape, similar to an egg carton, which mimics the regular arrangement of particles in real crystalline materials.

When charged particles are exposed to magnetic fields, their trajectories are bent into circular orbits, causing them to loop around and around. The higher the magnetic field, the tighter a particle’s orbit becomes. However, to confine electrons to the microscopic scale of a crystalline material, a magnetic field 100 times stronger than that of the strongest magnets in the world would be required.

The group asked whether this could be done with ultracold atoms in an optical lattice. Since the ultracold atoms are not charged, as electrons are, but are instead neutral particles, their trajectories are normally unaffected by magnetic fields.

Instead, the MIT group came up with a technique to generate a synthetic, ultrahigh magnetic field, using laser beams to push atoms around in tiny orbits, similar to the orbits of electrons under a real magnetic field. In 2013, Ketterle and his colleagues demonstrated the technique, along with other researchers in Germany, which uses a tilt of the optical lattice and two additional laser beams to control the motion of the atoms.  On a flat lattice, atoms can easily move around from site to site. However, in a tilted lattice, the atoms would have to work against gravity. In this scenario, atoms could only move with the help of laser beams.

“Now the laser beams could be used to make neutral atoms move around like electrons in a strong magnetic field,” added Kennedy.

Using laser beams, the group could make the atoms orbit, or loop around, in a radius as small as two lattice squares, similar to how particles would move in an extremely high magnetic field.

“Once we had the idea, we were really excited about it, because of its simplicity. All we had to do was take two suitable laser beams and carefully align them at specific angles, and then the atoms drastically change their behavior,” Kennedy says.

After developing the tilting technique to simulate a high magnetic field, the group worked for a year and a half to optimize the lasers and electronic controls to avoid any extraneous pushing of the atoms, which could make them lose their superfluid properties.

“It’s a complicated experiment, with a lot of laser beams, electronics, and magnets, and we really had to get everything stable,” Burton says. “It took so long just to iron out all the details to eventually have this ultracold matter in the presence of these high fields, and keep them cold — some of it was painstaking work.”

In the end, the researchers were able to keep the superfluid gas stable for a tenth of a second. During that time, the team took time-of-flight pictures of the distribution of atoms to capture the topology, or shape, of the superfluid. Those images also reveal the structure of the magnetic field — something that’s been known, but never directly visualized until now.

“The main accomplishment is that we were able to verify and identify the superfluid state,” Ketterle says. “If we can get synthetic magnetic fields under even better control, our laboratory could do years of research on this topic. For the expert, what it opens up is a new window into the quantum world, where materials with new properties can be studied.”

Going forward, the team plans to carry out similar experiments, but to add strong interactions between ultracold atoms, or to incorporate different quantum states, or spins. Ketterle says such experiments would connect the research to important frontiers in material research, including quantum Hall physics and topological insulators.

“We are adding new perspectives to physics,” Ketterle says. “We are touching on the unknown, but also showing physics that in principle is known, but at a new level of clarity.”

This research was funded by the National Science Foundation, the Air Force Office for Scientific Research, and the Army Research Office.

Magnetism observed in a gas for the first time