An old artifact kept in a vault outside Paris is no longer the standard for the kilogram. Now, nature itself provides the definition.
David L. Chandler | MIT News Office
Publication Date:
Press Inquiries 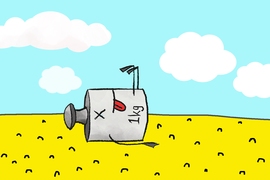 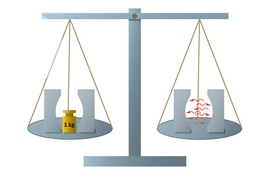 ↓ Download Image
Caption: The new definition of the kilo, as Wolfgang Ketterle explains, is equivalent to the mass of a specified number of photons (particles of light), which could be trapped in a cavity between mirrors, as seen at right, so that they could be weighed on a standard scale.

Caption:
The new definition of the kilo, as Wolfgang Ketterle explains, is equivalent to the mass of a specified number of photons (particles of light), which could be trapped in a cavity between mirrors, as seen at right, so that they could be weighed on a standard scale.
Credits:
Illustration by Alan Jamison, MIT

For 130 years, a cylinder made of a platinum-iridium alloy and stored in a suburb of Paris called Saint Cloud has been the official definition of a kilogram, the internationally accepted basic unit of mass. But that will change once and for all on May 20, when for the first time all of the basic units of measurement will be officially defined in terms of  atomic properties and fundamental physics constants, rather than specific, human-made objects.

The other objects on which physical standards are based, such as the standard meter, were already replaced years ago, but the kilogram — generally known as the kilo for short — turned out to be a harder unit to define in absolute terms. Physicists and engineers have been frustrated, however, by the inevitable imprecision of a unit based on a single physical object.

Despite the greatest of precautions, every time the standard kilo was handled — for example, to compare it to another unit that could then be used to calibrate instruments — it would shed some atoms and its mass would be slightly changed. Over its lifetime, that standard kilo is estimated to have lost about 50 micrograms. A better way was needed.

Now, instead of a particular lump of metal in a single location, a kilo is to be defined by fixing the numerical value of a fundamental constant of nature known as the Planck constant. This constant relates the energy of a photon to its frequency, and is referred to by the letter h. It is now defined as 6.62607015 times 10-34 kilograms times square meters per second, thereby defining the kilogram in terms of the second and the meter. Since the second and meter are already defined completely in terms of physical constants, the kilogram is now also defined only in terms of fundamental physical constants.

Some may find this new definition complicated and difficult to understand, but Wolfgang Ketterle, a Nobel Prize winner and the John D. MacArthur Professor of Physics at MIT, doesn’t see it that way. “Conceptually, the definition is very simple,” he says.

Ketterle notes that the new definition of a kilogram corresponds to the mass of an exact number of particles — a very large number of particles. According to his formulation, it is 1.4755214 times 1040 photons (particles of light) of a particular wavelength, which is that of cesium atoms used in atomic clocks.

No, that’s not exactly something your butcher can place on a scale to measure out a kilo of ground beef, but it is something that scientists and engineers everywhere in the world — and even aliens on other worlds — could match precisely, without having to carry a scale to Paris to check it.

Ketterle sees this important shift in measurement standards as a teachable moment, an opportunity to explain some basic principles to a wide audience. “Ideally, every high school teacher would tell his or her science class about this historic change,” he suggests.

To mark the occasion of the official change, which takes place on World Metrology Day, May 20, Ketterle will deliver a talk on the new standards at 4 p.m. that day in MIT’s Huntington Hall, room 10-250, where he will explain both the concepts behind the new definition of the kilogram and the techniques for its measurement.

Explaining how the other basic units have been defined through basic physical constants is a bit more straightforward than it is for the kilo: The second, for example, is defined as a specific number of vibrations of an atom of cesium. The meter, no longer a metal bar in Saint Cloud, is now defined as the distance that light travels (in a vacuum) in a specific interval of time, namely 1/299,792,458 of a second.

Defining the kilo through the mass of photons has to address the fact that photons are constantly whizzing around at the speed of light — after all, they are light — so getting them to sit still on a balance scale is not possible. Instead, they can be trapped between a pair of mirrors, which form an “optical cavity” that keeps them confined. Then, that cavity and its trapped photons can be placed on a balance and measured. The difference between an empty cavity and an identical one full of photons thus provides the mass of the photons themselves. So that’s the concept behind measuring a kilo according to the new definition.

However, collecting 1040 photons — that’s 1 with 40 zeros after it — is not practical, so instead measurements are made of a much smaller number, and then scaled up step by step. “How do you count to 1040?  Well, you can’t,” Ketterle says. “However, you can do it by using multiple steps.”

That’s essentially the principle used for measuring mass, he says. “In metrology, something analogous is done by comparing the atomic clock frequency of the cesium atoms to a much higher atomic frequency. Then you use this frequency to measure the mass of the electron or of a single atom, and only then you start counting,” he says.

In practice, there are currently two known methods for measuring such masses with great precision. These are known as the Kibble balance and the single-crystal silicon sphere. Both are techniques that laboratories around the world can now use to provide a precise standard for mass and measurements of weights, without ever again having to correlate their measurements with a specific physical object at some central repository.

What’s more, now that these units are defined in absolute terms, as soon as better measurement techniques are developed, the accuracy of these measurements will improve accordingly, without the need to revisit the underlying definitions.

The new definitions have great power, Ketterle says, because “every new method to count photons or atoms or measure frequencies will further improve the measurements of mass, since mass is no longer connected to an imprecise, man-made artifact.”

Prof. Wolfgang Ketterle speaks with Big Picture Science about the science behind the redefinition of the standard of mass for the kilogram. “We are defining the units in terms of perfect objects, objects made by nature and not manmade objects, which have imperfections,” explains Ketterle. “What we have now done instead is redefined the kilogram as the mass of an exact number of natural particles.”

Prof. Wolfgang Ketterle speaks with Bloomberg columnist Faye Flam about the recently redefined standard of measurement for the kilogram and the importance of making the change understandable to the general public. “Not everyone is explaining the new kilogram as a quantity of light, but MIT physicist Wolfgang Ketterle makes a convincing case that this is the best and simplest way to understand it,” writes Flam.

WGBH's Edgar Herwick reports on Prof. Wolfgang Ketterle’s presentation exploring the kilogram’s new standard of measurement. Ketterle explained that the change will have a big impact, in particular for micro and nanotechnologies. "Small quantities matter for our lives," said Ketterle.