The Institute’s five schools and the MIT Schwarzman College of Computing will have dedicated professional staff to advance initiatives locally and across the Institute.
Institute Community and Equity Office
Publication Date:
Press Inquiries 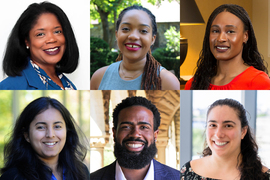 As an important step forward in MIT’s ongoing efforts to create a more welcoming and inclusive community, the Institute has hired six new assistant deans, one in each school and in the MIT Stephen A. Schwarzman College of Computing, to serve as diversity, equity, and inclusion professionals.

Set to be in place by the fall of 2021, these new positions are a result of the February 2020 recommendations of the MIT working groups charged with implementing the findings of the National Academies of Science, Engineering, and Medicine’s (NASEM) report on sexual and gender harassment of women in academia. Together, these reports called for “a network of support, advocacy, and community-building expertise across campus to improve our community culture.” MIT President L. Rafael Reif echoed these commitments to new staff and resources in his July 2020 letter to the community addressing systemic racism.

“MIT’s success in developing solutions to the world’s greatest challenges depends on our ability to attract and retain a diverse and collaborative community, and these appointments will help us strengthen that vibrant community,” says Provost Martin Schmidt. “This talented group will be an invaluable resource to everyone in our community as we roll out and implement our DEI Strategic Action Plan. I welcome them to MIT and look forward to engaging with them in this work.”

All six searches were conducted simultaneously and coordinated through the Institute Community and Equity Office (ICEO). John Dozier, who heads the ICEO, will serve as a “dotted-line” supervisor for all six assistant deans. Dozier, along with ICEO Deputy Director Maryanne Kirkbride and Associate Provost Tim Jamison, interviewed the candidates during the search process; together, they are also co-leading the creation of the DEI Strategic Action Plan.

“The search process itself was like a trial run for the kinds of collaborative practices we hope to move ahead with this group,” Dozier says. “We want this team to build on what we have already learned about working together. But we also want them to add their ideas and fresh perspectives to the challenges we face,” he adds. “This is a tremendously exciting opportunity for building community at MIT.”

The new assistant deans are:

This cluster of new hires is significant, Dozier notes, and there are more in the works. A search is underway to create a senior-level position in the Office of the Vice President for Research, and several academic departments have either already hired diversity officers or have searches in process.

“I look forward to seeing this group come together and to helping connect it with the many other community-building efforts across MIT,” Dozier says. “There are a lot of people in the MIT community who are already working in this area, and this is starting to feel like critical mass.”

Call to share input on diversity, equity, and inclusion proposal