Exploring the quantum field, from the sun’s core to the Big Bang 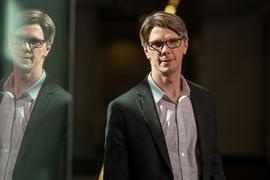 ↓ Download Image
Caption: “With all of us stuck at home or in remote locations, I’m not sure that anyone is feeling particularly inspired right now, but this pandemic will eventually end, and sometimes getting lost in the intricacies of Maxwell’s equations gives a nice break from what is going on in the world,” says theoretical physicist William Detmold.
Credits: Photo: Jared Charney 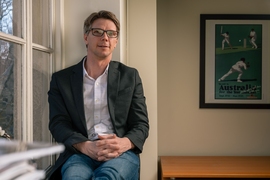 ↓ Download Image
Caption: “With all of us stuck at home or in remote locations, I’m not sure that anyone is feeling particularly inspired right now, but this pandemic will eventually end, and sometimes getting lost in the intricacies of Maxwell’s equations gives a nice break from what is going on in the world,” says theoretical physicist William Detmold.
Credits: Photo: Jared Charney

Caption:
“With all of us stuck at home or in remote locations, I’m not sure that anyone is feeling particularly inspired right now, but this pandemic will eventually end, and sometimes getting lost in the intricacies of Maxwell’s equations gives a nice break from what is going on in the world,” says theoretical physicist William Detmold.
Credits:
Photo: Jared Charney

How do protons fuse to power the sun? What happens to neutrinos inside a collapsing star after a supernova? How did atomic nuclei form from protons and neutrons in the first few minutes after the Big Bang?

Theoretical physicist William Detmold marshals these tools to “look” into the quantum realm. “Improved calculations of these processes enable us to learn about fundamental properties of the universe,” he says. “Of the visible universe, most mass is made of protons. Understanding the structure of the proton and its properties seems pretty important to me.”

Researchers at the Large Hadron Collider (LHC), the world’s largest particle accelerator, investigate those properties by smashing particles together and poring over the subatomic wreckage for clues to what makes up and binds together matter.

Detmold, an associate professor in the Department of Physics and a member of the Center for Theoretical Physics and the Laboratory for Nuclear Science, starts instead from first principles — namely, the theory of the Standard Model of particle physics.

The Standard Model describes three of the four fundamental forces of particle physics (with the exception of gravity) and all of the known subatomic particles.

The theory has succeeded in predicting the results of experiments time and time again, including, perhaps most famously, the 2011 confirmation by LHC researchers of the existence of the Higgs boson.

A core focus of Detmold’s research is on “confronting experimental data” from experiments such as the LHC. After devising calculations, running them on multiple supercomputers, and sifting through the enormous quantity of statistics they crank out — a process that can take from six months to several years — Detmold and his team then “take all that data and do a lot of analysis to extract key physics quantities — for example, the mass of the proton, as a numerical value with an uncertainty range.”

“My driving concern in this regard is how will this analysis impact experimental results,” Detmold says. “In some cases, we do these calculations in order to interpret experiments done at the LHC, and ask: Is the Standard Model describing what’s going on there?”

Detmold has made important advances in solving the complex equations of quantum chromodynamics (QCD), a quantum field theory that describes the strong interactions inside of a proton, between quarks (the smallest known constituent of matter) and gluons (the forces that bind them together).

He has performed some of the first QCD calculations of certain particle decays reactions. They have, for the most part, aligned very closely with results from the LHC.

“There are no really stark discrepancies between the Standard Model and LHC results, but there are some interesting tensions,” he says. “My work has been looking at some of those tensions.”

Detmold’s interest in quantum physics dates to his schoolboy days, growing up in Adelaide, Australia. “I remember reading a bunch of popular science books as a young kid,” he recalls, “and being very intrigued about quarks, gluons, and other fundamental particles, and wanting to get into the mathematical tools to work with them.”

He would go on to earn both his bachelors degree and PhD from the University of Adelaide. As an undergraduate studying mathematics, he encountered a professor who opened his eyes to the mysteries of quantum mechanics. “It was probably the most exciting class I’ve had. And I get to teach that now.”

He’s been teaching that introductory course on quantum mechanics at MIT for a few years now, and he has become adept at spotting those students who are similarly seized by the subject. “In every class there are students you can see the enthusiasm dripping off the page as they write their problem sets. It’s exciting to interact with them.”

While he can’t always bring the full complexity of his research into those conversations, he tries to infuse them with the spirit of his enterprise: how to ask the questions that might yield new insights into the deep structures of the universe.

“You can frame things in ways to inspire students to go into research and push themselves to learn more,” he says. “A lot of teaching is about motivating students to go and find out more themselves, not just information transmission. And hopefully I inspire my students the way my professor inspired me.”

He adds: “With all of us stuck at home or in remote locations, I’m not sure that anyone is feeling particularly inspired right now, but this pandemic will eventually end, and sometimes getting lost in the intricacies of Maxwell’s equations gives a nice break from what is going on in the world.”

When he isn’t teaching or analyzing supercomputer data, Detmold is often helping to plan better experiments.

The Electron-Ion Collider, a facility planned for construction over the next decade at Brookhaven National Lab on Long Island, aims to advance understanding of the internal structure of the proton. Some of Detmold’s calculations are aimed at providing a qualitative picture of the structure of gluons inside the proton, to help the project’s designers know what to look for, in terms of orders of magnitude for detecting certain quantities.

“We can make predictions for what we’ll be seeing if you design it in a certain way,” he says.

Detmold has also become something of an expert at orchestrating complex supercomputing projects. That entails figuring out how to run a huge number of calculations in an efficient way, given the limited availability of supercomputing power and time.

He and his lab members have developed algorithms and software infrastructure to run these calculations on massive supercomputers, some of which have different types of processing units that make data management complicated. “It’s a research project in its own right, how to perform those calculations in a way that’s efficient.”

Indeed, Detmold spends time working on how improve methods for getting to the answer. New algorithms, he says, are a key to advancing computation to tackle new problems, calculating nuclear structures and reactions in the context of the Standard Model.

“Let’s say there’s a quantity we want to compute, but with the tools we have at the moment it takes 10,000 years of running a massive supercomputer,” he says. “Coming up with a new way to calculate something that actually makes it possible to do — that’s exciting.”

Inspiring interest in the unknown

But fundamental mysteries are still at the center of Detmold’s work. As quarks and gluons get farther apart from each other, the strength of their interactions increases. To understand what’s happening in these low-energy states, he has advanced the use of a computational technique known as lattice quantum chromodynamics (LQCD), which places the quantum fields of the quarks and gluons on a discretized grid of points to represent space-time.

In 2017, Detmold and colleagues made the first-ever LQCD calculations of the rate of proton-proton fusion — the process by which two protons fuse together to form a deuteron.

This process kicks off the nuclear reactions that power the sun. It’s also exceedingly difficult to study through experiments. “If you try to smash together two protons, their electric charges mean they don’t want to be near each other,” says Detmold.

“It shows where this field can go,” he says of his team’s breakthrough. “It’s one of the simplest nuclear reactions, but it opens the doorway to saying we can address these directly from the Standard Model. We’re trying to build upon this work and calculate related reactions.”

Another recent project involved using LQCD to study the formation of nuclei in the universe its earliest moments. As well as looking at these processes for the actual universe, he’s performed computations that change certain parameters — the masses of quarks and how strongly they interact — in order to “predict” how the reactions of Big Bang nucleosynthesis might have happened and how much they might have affected the evolution of the universe.

“These calculations can tell you how likely it is to end up producing universes like the one we see,” Detmold says.

Meet the 2019 tenured professors in the School of Science