Vibrations of coronavirus proteins may play a role in infection 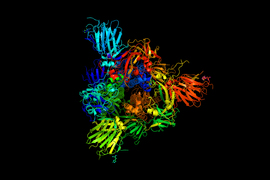 ↓ Download Image
Caption: New research at MIT shows that vibrations of the protein spikes on coronaviruses, including the one that causes Covid-19, play a crucial part in allowing the virus to penetrate human cells.
Credits: Credit: Markus Buehler and Yiwen Hu/MIT 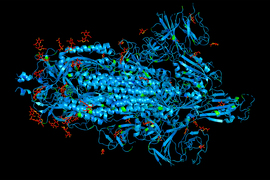 ↓ Download Image
Caption: New research at MIT shows that vibrations of the protein spikes on coronaviruses, including the one that causes Covid-19, play a crucial part in allowing the virus to penetrate human cells.
Credits: Credit: Markus Buehler and Yiwen Hu/MIT

Caption:
New research at MIT shows that vibrations of the protein spikes on coronaviruses, including the one that causes Covid-19, play a crucial part in allowing the virus to penetrate human cells.
Credits:
Credit: Markus Buehler and Yiwen Hu/MIT

Caption:
New research at MIT shows that vibrations of the protein spikes on coronaviruses, including the one that causes Covid-19, play a crucial part in allowing the virus to penetrate human cells.
Credits:
Credit: Markus Buehler and Yiwen Hu/MIT

When someone struggles to open a lock with a key that doesn’t quite seem to work, sometimes jiggling the key a bit will help. Now, new research from MIT suggests that coronaviruses, including the one that causes Covid-19, may use a similar method to trick cells into letting the viruses inside. The findings could be useful for determining how dangerous different strains or mutations of coronaviruses may be, and might point to a new approach for developing treatments.

Studies of how spike proteins, which give coronaviruses their distinct crown-like appearance, interact with human cells typically involve biochemical mechanisms, but for this study the researchers took a different approach. Using atomistic simulations, they looked at the mechanical aspects of how the spike proteins move, change shape, and vibrate. The results indicate that these vibrational motions could account for a strategy that coronaviruses use, which can trick a locking mechanism on the cell’s surface into letting the virus through the cell wall so it can hijack the cell’s reproductive mechanisms.

The team found a strong direct relationship between the rate and intensity of the spikes’ vibrations and how readily the virus could penetrate the cell. They also found an opposite relationship with the fatality rate of a given coronavirus. Because this method is based on understanding the detailed molecular structure of these proteins, the researchers say it could be used to screen emerging coronaviruses or new mutations of Covid-19, to quickly assess their potential risk.

The findings, by MIT professor of civil and environmental engineering Markus Buehler and graduate student Yiwen Hu, are being published today in the journal Matter.

All the images we see of the SARS-CoV-2 virus are a bit misleading, according to Buehler. “The virus doesn’t look like that,” he says, because in reality all matter down at the nanometer scale of atoms, molecules, and viruses “is continuously moving and vibrating. They don’t really look like those images in a chemistry book or a website.”

Buehler’s lab specializes in atom-by-atom simulation of biological molecules and their behavior. As soon as Covid-19 appeared and information about the virus’ protein composition became available, Buehler and Hu, a doctoral student in mechanical engineering, swung into action to see if the mechanical properties of the proteins played a role in their interaction with the human body.

The tiny nanoscale vibrations and shape changes of these protein molecules are extremely difficult to observe experimentally, so atomistic simulations are useful in understanding what is taking place. The researchers applied this technique to look at a crucial step in infection, when a virus particle with its protein spikes attaches to a human cell receptor called the ACE2 receptor. Once these spikes bind with the receptor, that unlocks a channel that allows the virus to penetrate the cell.

That binding mechanism between the proteins and the receptors works something like a lock and key, and that’s why the vibrations matter, according to Buehler. “If it's static, it just either fits or it doesn't fit,” he says. But the protein spikes are not static; “they’re vibrating and continuously changing their shape slightly, and that's important. Keys are static, they don't change shape, but what if you had a key that's continuously changing its shape — it's vibrating, it's moving, it's morphing slightly? They're going to fit differently depending on how they look at the moment when we put the key in the lock.”

The more the “key” can change, the researchers reason, the likelier it is to find a fit.

Buehler and Hu modeled the vibrational characteristics of these protein molecules and their interactions, using analytical tools such as “normal mode analysis.” This method is used to study the way vibrations develop and propagate, by modeling the atoms as point masses connected to each other by springs that represent the various forces acting between them.

They found that differences in vibrational characteristics correlate strongly with the different rates of infectivity and lethality of different kinds of coronaviruses, taken from a global database of confirmed case numbers and case fatality rates. The viruses studied included SARS-CoV, MERS-CoV, SATS-CoV-2, and of one known mutation of the SARS-CoV-2 virus that is becoming increasingly prevalent around the world. This makes this method a promising tool for predicting the potential risks from new coronaviruses that emerge, as they likely will, Buehler says.

In all the cases they have studied, Hu says, a crucial part of the process is fluctuations in an upward swing of one branch of the protein molecule, which helps make it accessible to bind to the receptor. “That movement is of significant functional importance,” she says. Another key indicator has to do with the ratio between two different vibrational motions in the molecule. “We find that these two factors show a direct relationship to the epidemiological data, the virus infectivity and also the virus lethality,” she says.

The correlations they found mean that when new viruses or new mutations of existing ones appear, “you could screen them from a purely mechanical side,” Hu says. “You can just look at the fluctuations of these spike proteins and find out how they may act on the epidemiological side, like how infectious and how serious would the disease be.”

Potentially, these findings could also provide a new avenue for research on possible treatments for Covid-19 and other coronavirus diseases, Buehler says, speculating that it might be possible to find a molecule that would bind to the spike proteins in a way that would stiffen them and limit their vibrations. Another approach might be to induce opposite vibrations to cancel out the natural ones in the spikes, similarly to the way noise-canceling headphones suppress unwanted sounds.

As biologists learn more about the various kinds of mutations taking place in coronaviruses, and identify which areas of the genomes are most subject to change, this methodology could also be used predictively, Buehler says. The most likely kinds of mutations to emerge could all be simulated, and those that have the most dangerous potential could be flagged so that the world could be alerted to watch for any signs of the actual emergence of those particular strains. Buehler adds, “The G614 mutation, for instance, that is currently dominating the Covid-19 spread around the world, is predicted to be slightly more infectious, according to our findings, and slightly less lethal.”

Mihri Ozkan, a professor of electrical and computer engineering at the University of California at Riverside, who was not connected to this research, says this analysis “points out the direct correlation between nanomechanical features and the lethality and infection rate of coronavirus. I believe his work leads the field forward significantly to find insights on the mechanics of diseases and infections.”

Ozkan adds that “If under the natural environmental conditions, overall flexibility and mobility ratios predicted in this work do happen, identifying an effective inhibitor that can lock the spike protein to prevent binding could be a holy grail of preventing SARS-CoV-2 infections, which we all need now desperately.”

The research was supported by the MIT-IBM Watson AI Lab, the Office of Naval Research, and the National Institutes of Health.

Wall Street Journal reporter Sara Castellanos spotlights Prof. Markus Buehler’s work combining virtual reality with sound waves to help detect subtle changes in molecular motions. Castellanos notes that Buehler and his team recently found, “coronaviruses can be more lethal or infectious depending on the vibrations within the spike proteins that are found on the surface of the virus.”