How transient invaders can transform an ecosystem 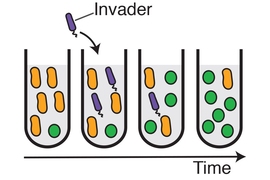 ↓ Download Image
Caption: MIT physicists have shown that introducing a transient invader (purple) into a population of bacteria can provoke the system to switch from one stable state (in which the yellow bacteria are dominant) to an alternative stable state, in which green becomes dominant.
Credits: Image: Courtesy of the researchers

Caption:
MIT physicists have shown that introducing a transient invader (purple) into a population of bacteria can provoke the system to switch from one stable state (in which the yellow bacteria are dominant) to an alternative stable state, in which green becomes dominant.
Credits:
Image: Courtesy of the researchers

When a plant or animal species is introduced to a new environment with few natural predators, it can spread uncontrollably, transforming the ecosystem and crowding out existing populations. One well-known example is the cane toad, which was introduced into Australia in 1935 and whose population is now well into the millions.

A related but less-understood scenario occurs when an invader arrives, transforms the ecosystem, and then dies out. MIT physicists have now shown how this kind of “transient invasion” can occur in bacterial populations, provoking a shift from one stable community state to another, while the invader itself disappears.

“These results highlight one possible way in which even if a species does not survive long term, it could nonetheless have long-term effects on the community,” says Jeff Gore, an MIT associate professor of physics and the senior author of the study.

The findings may also shed light on how transient invaders affect real-world ecosystems such as bacteria that alter the human gut microbiome before passing through the digestive tract, or reindeer whose grazing deforests an island so thoroughly that the population can no longer survive there.

MIT postdoc Daniel Amor is the lead author of the paper, which appears today in Science Advances. MIT research scientist Christoph Ratzke is also an author of the study.

The research team originally set out to explore factors that can drive ecosystems to switch between two stable states. Many ecosystems can exist in alternative stable states, but one may be more “desirable” than the other, such as a lake that can be healthy or eutrophic (excessively covered in algae). In one dramatic example, the Sahara region switched from a humid grassland to a desert about 5,000 years ago.

“The mechanisms that drive these transitions, and whether we can control them, are not very clear,” Amor says.

Gore’s lab studies the principles that govern these kinds of complex ecological shifts by creating simplified versions that can be analyzed in a laboratory. In this case, the researchers studied populations of two bacterial species — Corynebacterium ammoniagenes and Lactobacillus plantarum — that are known to inhibit each other’s growth by changing the pH of the growth medium in their environment. This mutual inhibition leads to two alternative states of the community in which one or the other species dominates.

The researchers first allowed the bacterial populations to naturally reach a stable state in which one species dominated the overall community. Once the populations stabilized, the researchers introduced an invader and measured how it affected the previously stable populations.

Of the six invader species that the researchers studied, three performed a takeover that shifted the overall population dynamics of the ecosystem, but then died out. This phenomenon occurred via changes in the acidity of the environment, the researchers found.

The researchers then explored whether this phenomenon could be seen in naturally occurring populations of bacteria. They took soil samples and grew the bacterial species they found, allowing these communities to reach a variety of alternative stable states in the new environment of the laboratory. After introducing the same invaders they used in the earlier experiments, they observed similar patterns of rapid growth and then disappearance of the invader, along with a shift in the composition of the original community.

“This suggests that it was not a rare effect that we only observe in hypothesis-guided experiments, but also in natural settings,” Amor says.

Stefano Allesina, a professor of ecology and evolution at the University of Chicago, described the experiments as “elegant and robust.”

“The work has clearly important implications for the manipulation of microbial communities. Being able to transition a microbial community from an unfavorable state to a favorable one is one of the most important challenges in the field, and the MIT team has shown how transient invaders may be the perfect ‘light switch’ — they do their job and then disappear,” says Allesina, who was not involved in the study.

While it may seem counterintuitive that a species would create conditions that lead to its own demise, this may happen often in nature, the researchers say. In a paper published in 2018, Gore and two colleagues described several species of bacteria that essentially commit “ecological suicide” by growing so fast that the local environment becomes too polluted with acidic waste for them to survive.

This occurs, in part, because genetic mutations that allow an individual to grow faster can spread rapidly through the population, even if it harms the environment.

“There are a lot of species that would modify the environment in such a way that it could lead to rapid population extinction,” Gore says. “It could be the case that in some situations, the strategy of growing slowly and not polluting the environment may not be evolutionarily stable against a mutant that just takes advantage of the environment while it’s good, growing quickly and leading to a lot of toxin production. The problem is that while it’s rational in the short term for each individual to do that, it leads to a suboptimal outcome for the population.”

Gore says he hopes the findings will encourage scientists who study more complicated ecosystems, such as lakes or the human gut microbiome, to look for these types of transient invasions and their after-effects.

“The nature of these complex systems is that they can be a little bit overwhelming,” he says. “You don’t know what are the things you should even be looking for in the data or what kind of experiments you should be doing. Our hope is that some of our work can motivate other people to look for this sort of phenomenon in their systems.”

This research was funded by a National Institutes of Health grant administered by MIT’s Materials Research Laboratory.

How a declining environment affects populations