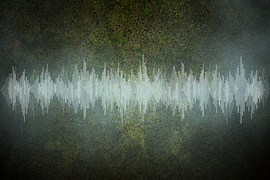 ↓ Download Image
Caption: Scientists have captured the sound of a “perfect fluid,” which flows with the smallest amount of friction allowed by the laws of quantum mechanics.
Credits: Image: Christine Daniloff, MIT

Caption:
Scientists have captured the sound of a “perfect fluid,” which flows with the smallest amount of friction allowed by the laws of quantum mechanics.
Credits:
Image: Christine Daniloff, MIT

For some, the sound of a “perfect flow” might be the gentle lapping of a forest brook or perhaps the tinkling of water poured from a pitcher. For physicists, a perfect flow is more specific, referring to a fluid that flows with the smallest amount of friction, or viscosity, allowed by the laws of quantum mechanics. Such perfectly fluid behavior is rare in nature, but it is thought to occur in the cores of neutron stars and in the soupy plasma of the early universe.

Now MIT physicists have created a perfect fluid in the laboratory, and found that it sounds something like this:

This recording is a product of a glissando of sound waves that the team sent through a carefully controlled gas of elementary particles known as fermions. The pitches that can be heard are the particular frequencies at which the gas resonates like a plucked string.

The researchers analyzed thousands of sound waves traveling through this gas, to measure its “sound diffusion,” or how quickly sound dissipates in the gas, which is related directly to a material’s viscosity, or internal friction.

Surprisingly, they found that the fluid’s sound diffusion was so low as to be described by a “quantum” amount of friction, given by a constant of nature known as Planck’s constant, and the mass of the individual fermions in the fluid.

This fundamental value confirmed that the strongly interacting fermion gas behaves as a perfect fluid, and is universal in nature. The results, published today in the journal Science, demonstrate the first time that scientists have been able to measure sound diffusion in a perfect fluid.

Scientists can now use the fluid as a model of other, more complicated perfect flows, to estimate the viscosity of the plasma in the early universe, as well as the quantum friction within neutron stars — properties that would otherwise be impossible to calculate. Scientists might even be able to approximately predict the sounds they make.

“It’s quite difficult to listen to a neutron star,” says Martin Zwierlein, the Thomas A. Frank Professor of Physics at MIT. “But now you could mimic it in a lab using atoms, shake that atomic soup and listen to it, and know how a neutron star would sound.”

While a neutron star and the team’s gas differ widely in terms of their size and the speed at which sound travels through, from some rough calculations Zwierlein estimates that the star’s resonant frequencies would be similar to those of the gas, and even audible — “if you could get your ear close without being ripped apart by gravity,” he adds.

To create a perfect fluid in the lab, Zwierlein’s team generated a gas of strongly interacting fermions — elementary particles, such as electrons, protons, and neutrons, that are considered the building blocks of all matter. A fermion is defined by its half-integer spin, a property that prevents one fermion from assuming the same spin as another nearby fermion. This exclusive nature is what enables the diversity of atomic structures found in the periodic table of elements.

“If electrons were not fermions, but happy to be in the same state, hydrogen, helium, and all atoms, and we ourselves, would look the same, like some terrible, boring soup,” Zwierlein says.

Fermions naturally prefer to keep apart from each other. But when they are made to strongly interact, they can behave as a perfect fluid, with very low viscosity. To create such a perfect fluid, the researchers first used a system of lasers to trap a gas of lithium-6 atoms, which are considered fermions.

The researchers precisely configured the lasers to form an optical box around the fermion gas. The lasers were tuned such that whenever the fermions hit the edges of the box they bounced back into the gas. Also, the interactions between fermions were controlled to be as strong as allowed by quantum mechanics, so that inside the box, fermions had to collide with each other at every encounter. This made the fermions turn into a perfect fluid.

“We had to make a fluid with uniform density, and only then could we tap on one side, listen to the other side, and learn from it,” Zwierlein says. “It was actually quite diffult to get to this place where we could use sound in this seemingly natural way.”

“Flow in a perfect way”

The team then sent sound waves through one side of the optical box by simply varying the brightness of one of the walls, to generate sound-like vibrations through the fluid at particular frequencies. They recorded thousands of snapshots of the fluid as each sound wave rippled through.

“All these snapshots together give us a sonogram, and it’s a bit like what’s done when taking an ultrasound at the doctor’s office,” Zwierlein says.

In the end, they were able to watch the fluid’s density ripple in response to each type of sound wave. They then looked for the sound frequencies that generated a resonance, or an amplified sound in the fluid, similar to singing at a wine glass and finding the frequency at which it shatters.

“The quality of the resonances tells me about the fluid’s viscosity, or sound diffusivity,” Zwierlein explains. “If a fluid has low viscosity, it can build up a very strong sound wave and be very loud, if hit at just the right frequency. If it’s a very viscous fluid, then it doesn’t have any good resonances.”

From their data, the researchers observed clear resonances through the fluid, particularly at low frequencies. From the distribution of these resonances, they calculated the fluid’s sound diffusion. This value, they found, could also be calculated very simply via Planck’s constant and the mass of the average fermion in the gas.

This told the researchers that the gas was a perfect fluid, and fundamental in nature: Its sound diffusion, and therefore its viscosity, was at the lowest possible limit set by quantum mechanics.

Zwierlein says in addition to using the results to estimate quantum friction in more exotic matter, such as neutron stars, the results can be helpful in understanding how certain materials might be made to exhibit perfect, superconducting flow.

“This work connects directly to resistance in materials,” Zwierlein says. “Having figured out what’s the lowest resistance you could have from a gas tells us what can happen with electrons in materials, and how one might make materials where electrons could flow in a perfect way. That’s exciting.”

This research was supported, in part, by the National Science Foundation and the NSF Center for Ultracold Atoms, the Air Force Office of Scientific Research, the Office of Naval Research, and the David and Lucile Packard Foundation.

Writing for Popular Mechanics, Leila Stein highlights how MIT researchers have created a perfect fluid and captured its sound. “To record the sound, the team of physicists sent a glissando of sound waves through a controlled gas of elementary particles called fermions,” Stein writes.

Prof. Martin Zwierlein speaks with Edgar Herwick III of GBH Radio about his work capturing the sound of a “perfect” fluid. "It was a beautiful sound," says Zwierlein. "It was a quantum sound. In a way it was the most long-lasting sound that you can imagine given the laws of quantum mechanics.”

New Scientist reporter Abigail Beall spotlights how MIT researchers have listened to sound waves traveling through a "perfect" fluid, which could shed light on the resonant frequencies within a neutron star. “The quality of the resonances tells me about the fluid’s viscosity, or sound diffusivity,” says Prof. Martin Zwierlein. “If a fluid has low viscosity, it can build up a very strong sound wave and be very loud, if hit at just the right frequency. If it’s a very viscous fluid, then it doesn’t have any good resonances.”

For first time, researchers see individual atoms keep away from each other or bunch up as pairs