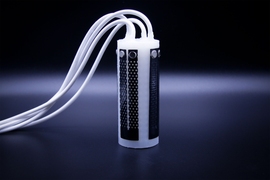 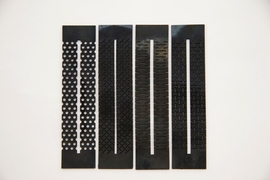 ↓ Download Image
Caption: The researchers’ soft sensors are conductive silicone sheets cut into kirigami patterns. They have “piezoresistive” properties, meaning they change in electrical resistance when strained. As the sensor deforms in response to the robotic arm’s stretching and compressing, its electrical resistance is converted to an output voltage that’s then used as a signal correlating to that movement.
Credits: Ryan L. Truby, MIT CSAIL

Caption:
MIT researchers have created a “sensorized” skin, made with kirigami-inspired sensors, that gives soft robots greater awareness of the motion and position of their bodies.
Credits:
Ryan L. Truby, MIT CSAIL

Caption:
The researchers’ soft sensors are conductive silicone sheets cut into kirigami patterns. They have “piezoresistive” properties, meaning they change in electrical resistance when strained. As the sensor deforms in response to the robotic arm’s stretching and compressing, its electrical resistance is converted to an output voltage that’s then used as a signal correlating to that movement.
Credits:
Ryan L. Truby, MIT CSAIL

For the first time, MIT researchers have enabled a soft robotic arm to understand its configuration in 3D space, by leveraging only motion and position data from its own “sensorized” skin.

Soft robots constructed from highly compliant materials, similar to those found in living organisms, are being championed as safer, and more adaptable, resilient, and bioinspired alternatives to traditional rigid robots. But giving autonomous control to these deformable robots is a monumental task because they can move in a virtually infinite number of directions at any given moment. That makes it difficult to train planning and control models that drive automation.

Traditional methods to achieve autonomous control use large systems of multiple motion-capture cameras that provide the robots feedback about 3D movement and positions. But those are impractical for soft robots in real-world applications.

In a paper being published in the journal IEEE Robotics and Automation Letters, the researchers describe a system of soft sensors that cover a robot’s body to provide “proprioception” — meaning awareness of motion and position of its body. That feedback runs into a novel deep-learning model that sifts through the noise and captures clear signals to estimate the robot’s 3D configuration. The researchers validated their system on a soft robotic arm resembling an elephant trunk, that can predict its own position as it autonomously swings around and extends.

The sensors can be fabricated using off-the-shelf materials, meaning any lab can develop their own systems, says Ryan Truby, a postdoc in the MIT Computer Science and Artificial Laboratory (CSAIL) who is co-first author on the paper along with CSAIL postdoc Cosimo Della Santina.

“We’re sensorizing soft robots to get feedback for control from sensors, not vision systems, using a very easy, rapid method for fabrication,” he says. “We want to use these soft robotic trunks, for instance, to orient and control themselves automatically, to pick things up and interact with the world. This is a first step toward that type of more sophisticated automated control.”

One future aim is to help make artificial limbs that can more dexterously handle and manipulate objects in the environment. “Think of your own body: You can close your eyes and reconstruct the world based on feedback from your skin,” says co-author Daniela Rus, director of CSAIL and the Andrew and Erna Viterbi Professor of Electrical Engineering and Computer Science. “We want to design those same capabilities for soft robots.”

A longtime goal in soft robotics has been fully integrated body sensors. Traditional rigid sensors detract from a soft robot body’s natural compliance, complicate its design and fabrication, and can cause various mechanical failures. Soft-material-based sensors are a more suitable alternative, but require specialized materials and methods for their design, making them difficult for many robotics labs to fabricate and integrate in soft robots.

While working in his CSAIL lab one day looking for inspiration for sensor materials, Truby made an interesting connection. “I found these sheets of conductive materials used for electromagnetic interference shielding, that you can buy anywhere in rolls,” he says. These materials have “piezoresistive” properties, meaning they change in electrical resistance when strained. Truby realized they could make effective soft sensors if they were placed on certain spots on the trunk. As the sensor deforms in response to the trunk’s stretching and compressing, its electrical resistance is converted to a specific output voltage. The voltage is then used as a signal correlating to that movement.

But the material didn’t stretch much, which would limit its use for soft robotics. Inspired by kirigami — a variation of origami that includes making cuts in a material — Truby designed and laser-cut rectangular strips of conductive silicone sheets into various patterns, such as rows of tiny holes or crisscrossing slices like a chain link fence. That made them far more flexible, stretchable, “and beautiful to look at,” Truby says.

The researchers’ robotic trunk comprises three segments, each with four fluidic actuators (12 total) used to move the arm. They fused one sensor over each segment, with each sensor covering and gathering data from one embedded actuator in the soft robot. They used “plasma bonding,” a technique that energizes a surface of a material to make it bond to another material. It takes roughly a couple hours to shape dozens of sensors that can be bonded to the soft robots using a handheld plasma-bonding device.

As hypothesized, the sensors did capture the trunk’s general movement. But they were really noisy. “Essentially, they’re nonideal sensors in many ways,” Truby says. “But that’s just a common fact of making sensors from soft conductive materials. Higher-performing and more reliable sensors require specialized tools that most robotics labs do not have.”

To estimate the soft robot’s configuration using only the sensors, the researchers built a deep neural network to do most of the heavy lifting, by sifting through the noise to capture meaningful feedback signals. The researchers developed a new model to kinematically describe the soft robot’s shape that vastly reduces the number of variables needed for their model to process.

Next, the researchers aim to explore new sensor designs for improved sensitivity and to develop new models and deep-learning methods to reduce the required training for every new soft robot. They also hope to refine the system to better capture the robot’s full dynamic motions.

Currently, the neural network and sensor skin are not sensitive to capture subtle motions or dynamic movements. But, for now, this is an important first step for learning-based approaches to soft robotic control, Truby says: “Like our soft robots, living systems don’t have to be totally precise. Humans are not precise machines, compared to our rigid robotic counterparts, and we do just fine.”

TechCrunch reporter Brian Heater writes that CSAIL researchers have developed a new material that could help bring a sense of touch to robotic arms. “The usually rigid material was reconfigured into a ‘kirigami’ configuration, laser cut and reassembled into chain-linked rows so it can be stretched and flexed to adhere to the shape of the robot and move with it,” explains Heater.

Soft robotic fish swims alongside real ones in coral reefs