Caption:
The origami gripper can lift a wide range of objects, from apples and soup cans to wine glasses and drones.
Credits:
Image: Jason Dorfman/MIT CSAIL

Fifty years ago, the first industrial robot arm (called Unimate) assembled a simple breakfast of toast, coffee, and champagne. While it might have looked like a seamless feat, every movement and placement was coded with careful consideration.

Even with today’s more intelligent and adaptive robots, this task remains difficult for machines with rigid hands. They tend to work only in structured environments with predefined shapes and locations, and typically can’t cope with uncertainties in placement or form.

In recent years, though, roboticists have come to grips with this problem by making fingers out of soft, flexible materials like rubber. This pliability lets these soft robots pick up anything from grapes to boxes and empty water bottles, but they’re still unable to handle large or heavy items.

To give these soft robots a bit of a hand, researchers from MIT and Harvard University have developed a new gripper that’s both soft and strong: a cone-shaped origami structure that collapses in on objects, much like a Venus' flytrap, to pick up items that are as much as 100 times its weight. This motion lets the gripper grasp a much wider range of objects — such as soup cans, hammers, wine glasses, drones, and even a single broccoli floret. 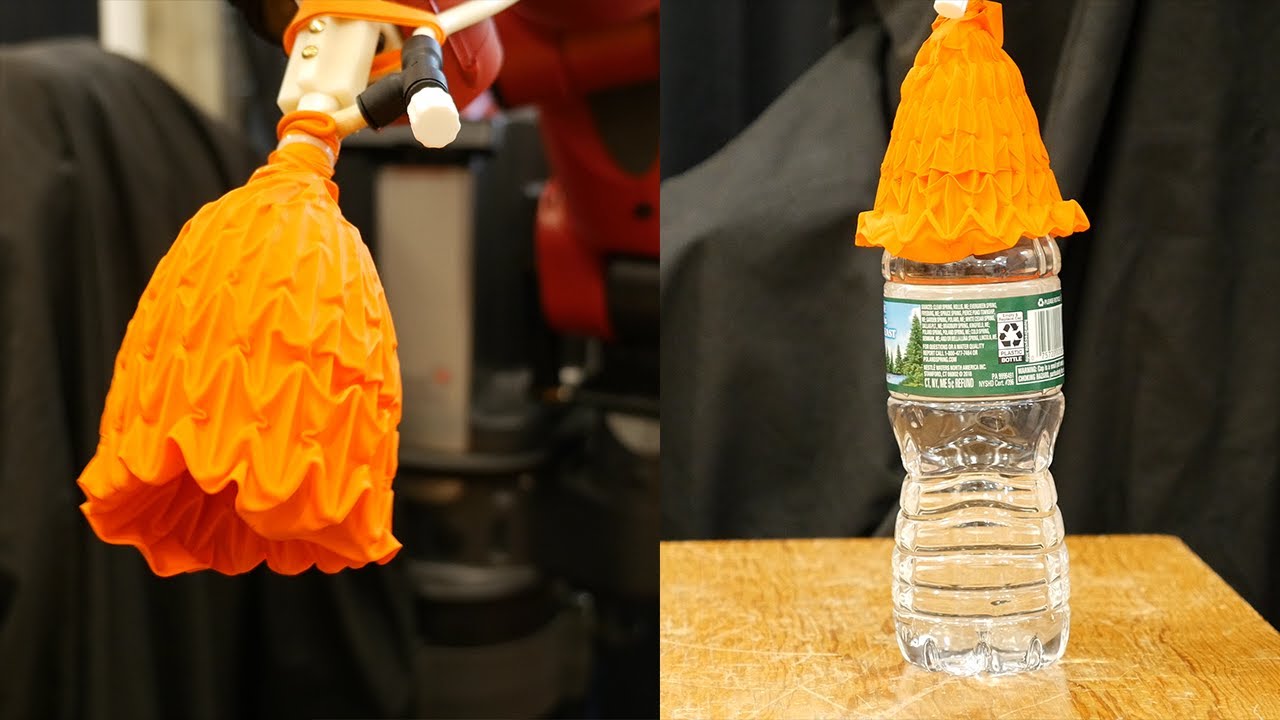 “One of my moonshots is to create a robot that can automatically pack groceries for you,” says MIT Professor Daniela Rus, director of MIT’s Computer Science and Artificial Intelligence Laboratory (CSAIL) and one of the senior authors of a new paper about the project.

“Previous approaches to the packing problem could only handle very limited classes of objects — objects that are very light, or objects that conform to shapes such as boxes and cylinders — but with the Magic Ball gripper system we’ve shown that we can do pick-and-place tasks for a large variety of items ranging from wine bottles to broccoli, grapes and eggs,” says Rus. “In other words, objects that are heavy and objects that are light. Objects that are delicate, or sturdy, or that have regular or free-form shapes.”

The project is one of several in recent years that has researchers thinking outside the box with robot design. Ball-shaped grippers, for example, can handle a wider range of objects than fingers, but still have the issue of limited angles. Softer robotic fingers typically use compressed air, but aren’t strong enough to pick up heavier objects.

The structure of this new gripper, meanwhile, takes an entirely different form. Cone-shaped, hollow, and vacuum-powered, the device was inspired by the “origami magic ball” and can envelope an entire object and successfully pick it up.

The gripper has three parts: the origami-based skeleton structure, the airtight skin to encase the structure, and the connector. The team created it using a mechanical rubber mold and a special heat-shrinking plastic that self-folds at high temperatures.

The magic ball’s skeleton is covered by either a rubber balloon or a thin fabric sheet, not unlike the team’s previous research on fluid-driven origami-inspired artificial muscles, which consisted of an airtight skin surrounding a foldable skeleton and fluid.

The team used the gripper with a standard robot to test its strength on different objects. The gripper could grasp and lift objects 70 percent of its diameter, which allowed it to pick up and hold a variety of soft foods without causing damage. It could also pick up bottles weighing over four pounds.

“Companies like Amazon and JD want to be able to pick up a wider array of delicate or irregular-shaped objects, but can’t with finger-based and suction-cup grippers,” says Shuguang Li, a joint postdoc at CSAIL and Harvard’s John A. Paulson School of Engineering and Applied Sciences. “Suction cups can’t pick up anything with holes — and they’d need something much stronger than a soft-finger-based gripper.”

The robot currently works best with cylindrical objects like bottles or cans, which could someday make it an asset for production lines in factories. Not surprisingly, the shape of the gripper makes it more difficult for it to grasp something flat, like a sandwich or a book.

“One of the key features of this approach to manipulator construction is its simplicity,” says Robert Wood, co-author and professor at Harvard’s School of Engineering and Wyss Institute for Biologically Inspired Engineering. “The materials and fabrication strategies used allow us to rapidly prototype new grippers, customized to object or environment as needed.”

In the future, the team hopes to try to solve the problem of angle and orientation by adding computer vision that would let the gripper “see”, and make it possible to grasp specific parts of objects.

“This is a very clever device that uses the power of 3-D printing, a vacuum, and soft robotics to approach the problem of grasping in a whole new way,” says Michael Wehner, an assistant professor of robotics at the University of California at Santa Cruz, who was not involved in the project. “In the coming years, I could imagine seeing soft robots gentle and dexterous enough to pick a rose, yet strong enough to safely lift a hospital patient.”

Other co-authors of the paper include MIT undergraduates John Stampfli, Helen Xu, Elian Malkin, and Harvard Research Experiences for Undergraduates student Evelin Villegas Diaz from St. Mary's University. The team will present their paper at the International Conference on Robotics and Automation in Montreal, Canada, this May.

This project was supported in part by the Defense Advanced Research Projects Agency, the National Science Foundation, and Harvard's Wyss Institute.

In this video, Mashable spotlights how MIT researchers have developed an origami-inspired soft robotic gripper that can grasp a wide variety of objects.

Fast Company reporter Mark Wilson writes that CSAIL researchers have developed a new soft robotic gripper that is modeled after a Venus flytrap. “Dubbed the Magic Ball, it’s a rubber and plastic structure that can contract around an object like an origami flower,” Wilson explains.

CSAIL researchers have developed a new robotic gripper that contains an origami skeleton, enabling the device to open and close like a flower and grasp a variety of delicate and heavy objects, reports James Vincent for The Verge “By combining this foldable skeleton with the soft exterior, we get the best of both worlds,” explains Prof. Daniela Rus, director of CSAIL.

TechCrunch reporter Brian Heater writes that researchers at CSAIL and Harvard have developed a soft robotic gripper that can both handle delicate objects and lift items up to 100 times its own weight. “The gripper itself is made of an origami-inspired skeletal structure, covered in either fabric or a deflated balloon,” explains Heater.