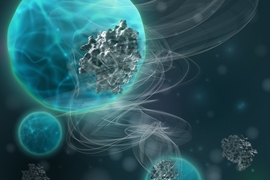 ↓ Download Image
Caption: MIT engineers have designed nanoparticle sensors that can diagnose lung diseases. If a disease-associated protein is present in the lungs, the protein cleaves a gaseous molecule from the nanoparticle, and this gas can be detected in the patient’s breath.
Credits: Credit: Cygny Malvar

Caption:
MIT engineers have designed nanoparticle sensors that can diagnose lung diseases. If a disease-associated protein is present in the lungs, the protein cleaves a gaseous molecule from the nanoparticle, and this gas can be detected in the patient’s breath.
Credits:
Credit: Cygny Malvar

Using specialized nanoparticles, MIT engineers have developed a way to monitor pneumonia or other lung diseases by analyzing the breath exhaled by the patient.

In a study of mice, the researchers showed that they could use this system to monitor bacterial pneumonia, as well as a genetic disorder of the lungs called alpha-1 antitrypsin deficiency.

“We envision that this technology would allow you to inhale a sensor and then breathe out a volatile gas in about 10 minutes that reports on the status of your lungs and whether the medicines you are taking are working,” says Sangeeta Bhatia, the John and Dorothy Wilson Professor of Health Sciences and Technology and Electrical Engineering and Computer Science at MIT.

More safety testing would be needed before this approach could be used in humans, but in the mouse study, no signs of toxicity in the lungs were observed.

For several years, Bhatia’s lab has been working on nanoparticle sensors that can be used as “synthetic biomarkers.” These markers are peptides that are not naturally produced by the body but are released from nanoparticles when they encounter proteins called proteases.

The peptides coating the nanoparticles can be customized so that they are cleaved by different proteases that are linked to a variety of diseases. If a peptide is cleaved from the nanoparticle by proteases in the patient’s body, it is later excreted in the urine, where it can be detected with a strip of paper similar to a pregnancy test. Bhatia has developed this type of urine test for pneumonia, ovarian cancer, lung cancer, and other diseases.

More recently, she turned her attention to developing biomarkers that could be detected in the breath rather than the urine. This would allow test results to be obtained more rapidly, and it also avoids the potential difficulty of having to acquire a urine sample from patients who might be dehydrated, Bhatia says.

She and her team realized that by chemically modifying the peptides attached to the synthetic nanoparticles, they could enable the particles to release gases called hydrofluoroamines that could be exhaled in the breath. The researchers attached volatile molecules to the end of the peptides in such a way that when proteases cleave the peptides, they are released into the air as a gas.

Working with Kunz and Ong at Lincoln Laboratory, Bhatia and her team devised a method for detecting the gas from the breath using mass spectrometry. The researchers then tested the sensors in mouse models of two diseases — bacterial pneumonia caused by Pseudomonas aeruginosa, and alpha-1 antitrypsin deficiency. During both of these diseases, activated immune cells produce a protease called neutrophil elastase, which causes inflammation.

For both of these diseases, the researchers showed that they could detect neutrophil elastase activity within about 10 minutes. In these studies, the researchers used nanoparticles that were injected intratracheally, but they are also working on a version that could be inhaled with a device similar to the inhalers used to treat asthma.

The researchers also demonstrated that they could use their sensors to monitor the effectiveness of drug treatment for both pneumonia and alpha-1 antitrypsin deficiency. Bhatia’s lab is now working on designing new devices for detecting the exhaled sensors that could make them easier to use, potentially even allowing patients to use them at home.

“Right now we’re using mass spectrometry as a detector, but in the next generation we’ve been thinking about whether we can make a smart mirror, where you breathe on the mirror, or make something that would work like a car breathalyzer,” Bhatia says.

Her lab is also working on sensors that could detect more than one type of protease at a time. Such sensors could be designed to reveal the presence of proteases associated with specific pathogens, including perhaps the SARS-CoV-2 virus.

The research was funded by a Global Health Innovation Partnership grant from the Bill and Melinda Gates Foundation; Massachusetts General Hospital; the Ragon Institute of MGH, MIT, and Harvard; Janssen Research and Development; and the Kathy and Curt Marble Cancer Research Fund.

Prof. Sangeeta Bhatia and senior postdoctoral associate Leslie Chan discuss their work developing a synthetic biosensor to diagnose lung disease. Chan explains that “instead of relying on naturally occurring breath volatiles, we wanted to be able to engineer the breath signal that we could use to monitor lung disease.”