As a community activist and scholar, PhD candidate Kevin Lee has a lot on his plate. But “when things matter so deeply in your bones, the energy just comes,” he says.
Sofia Tong | MIT News correspondent
Publication Date:
Press Inquiries 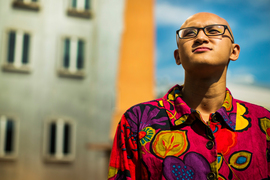 ↓ Download Image
Caption: “I really don’t think of myself as a researcher,” third-year PhD candidate Kevin Lee says. “I’m first and foremost an organizer. That’s where I gained my purpose. That’s where I learned what love is in its most unconditional and revolutionary form.”
Credits: Photo: Adam Glanzman

Caption:
“I really don’t think of myself as a researcher,” third-year PhD candidate Kevin Lee says. “I’m first and foremost an organizer. That’s where I gained my purpose. That’s where I learned what love is in its most unconditional and revolutionary form.”
Credits:
Photo: Adam Glanzman

After Kevin Lujan Lee came out to his parents, he found another family in Improving Dreams, Equality, Access, and Success (IDEAS), an undocumented student advocacy and support group at the University of California at Los Angeles. After joining the organization to support his undocumented partner at the time, he fell in love with the group and community around it, and became involved in organizing alongside undocumented youth. When Lee found himself struggling to make ends meet upon graduation, it was his then-partner’s parents who took him in and cared for him despite their limited means and the constant threat of deportation.

“I would be nothing if it weren’t for IDEAS, if it weren’t for undocumented people sheltering me and giving me food,” Lee says. “This was the spirit that the group embodied. People who were more than willing to just fork out what they didn’t have.”

The third-year PhD candidate credits the family and mission of IDEAS for every subsequent step he has taken, from his master’s degree at the University of Chicago to his current research in MIT’s Department of Urban Studies and Planning.

“I really don’t think of myself as a researcher,” Lee says. “I’m first and foremost an organizer. That’s where I gained my purpose. That’s where I learned what love is in its most unconditional and revolutionary form.”

Lee’s priority is to give back that sense of unconditional love to the communities who have made him who he is, a scholar with broad interests in equitable community and economic development. His research has ranged from the political engagement of Pacific Islanders in Hawai‘i and Guåhan, to the role of worker centers — many of which serve undocumented immigrants in the informal economy –– in California’s workforce development system.

“When you work with people and in geographies that are invisible, you need power,” Lee says. “That’s why I’m here.”

“You have to make a decision”

The people Lee met through IDEAS have become crucial points of access that make his research possible on a day-to-day basis. Organizing has always built itself on interpersonal trust, and for Lee, shared connections in the immigrant labor world allow him to engage with the organizations he studies. For instance, it was through a collaboration with Sasha Feldstein at the California Immigrant Policy Center that he pursued his first research project as an MIT student, which looked at the way gaps in organizational networks prevent marginalized populations from accessing the resources that are supposedly for them.

When it comes to workforce development, social scientists have identified the problem of “creaming,” wherein nonprofits focus their resources on the populations that are easiest to serve in the face of tightened budgets, leaving behind the most marginalized in the process.

Inspired by the centrality of interpersonal relationships in the organizing world, Lee identified an additional, network-based mechanism through which the most marginalized are excluded from workforce development nonprofits. He calls this “structural creaming.” One of the ways in which federally funded job training providers exclude marginalized populations, he says, is by failing to establish or maintain relationships with smaller nonprofits specifically oriented toward meeting those populations’ needs.

Without those relationships, such providers simply don’t reach these populations, and if they do, they might not provide them with the appropriate support or refer them to the right employers. As a result, people slip through the cracks. Small-scale service providers don’t receive the funding they could use to provide greater assistance to the marginalized populations they already reach.

“These small-scale organizations are not really in conversation with the mainstream workforce development systems,” explains Lee, who works on this issue along with Ana Luz Gonzalez-Vasquez and Magaly López at the UCLA Labor Center. “They often have a fraught relationship with American Job Centers [federally funded job-training providers under the U.S. Department of Labor]. And, these organizations are not often studied by economists, who wield tremendous influence in workforce development policymaking.”

Conversations about workforce development for the most marginalized need to move away from prioritizing the “average client,” scalability, and cost efficiency, Lee says.

“You have to make a decision,” he says of the nonprofits and agencies in this field. “Serving immigrants is not always cost-effective. It requires conducting targeted outreach, providing English as Second Language classes, offering ongoing support to address barriers to program participation, and high-quality employment — it’s a difficult process. But if you care about these populations, that’s what you'll do.”

A life of many edges

An organizing-first approach was what brought Lee to MIT’s Department of Urban Studies and Planning (DUSP) to begin with. Advised by Associate Professor Justin Steil, Lee feels the department’s emphasis on interdisciplinary, applied research has allowed him to pursue his interests within the context of the academy.

“What he provides is unconditional support, a ready smile, and a lot of space to do what I want,” Lee says of his advisor. “There are a lot of wonderful junior faculty who are phenomenal, and I’m very grateful to them.”

Lee’s ability to range broadly over his interests in immigrant rights and equitable development has led him toward several collaborative projects on an issue that reaches into his own ancestry and past: indigenous Pacific Islander sovereignty.

An initial project with the Center for Pacific Island Studies at the University of Hawai‘i at Mānoa prompted him to learn more about indigenous sovereignty and colonialism. Now, he is collaborating with Ngoc Phan, a political scientist at Hawai‘i Pacific University, to analyze her Native Hawaiian Survey. And, alongside Patrick Thomsen of the University of Auckland and Lana Lopesi of the Auckland University of Technology, he is theorizing Pacific Islander mobilities. The Pacific has many “edges,” Lee says, alluding to the work of Pacific Studies scholar and activist Teresia Teaiwa, who emphasizes the deep heterogeneity of land, history, culture, language, religion and spirituality across the Pacific.

Within his own life, Lee has been grappling with the relationship between indigeneity and his own position as an immigrant and settler on Native American lands. Lee is an indigenous Pacific Islander himself; his mother is CHamoru, from Guåhan, and his father is Chinese, from Malaysia. Growing up in Malaysia, he remembers how his mother maintained her relationship to her family and to the island, in the face of a hierarchical and colorist society where she was required to overcome inordinate obstacles as a young mother. Through his research, he aims to reconnect to his Pacific Islander heritage and takes inspiration from his mother’s resilience.

“She is my connection,” he says. “She continuously demonstrates what it for me what it means to be CHamoru and what it means to be an Islander. It’s to have strength, and to stay connected to your homeland. You do it because it’s in your blood. You just have to.”

Since at least 2010, DUSP has only ever enrolled one PhD student who identifies as “Native Hawaiian or Other Pacific Islander” — Lee himself. Thus, he feels a responsibility to make sure he is not the last Pacific Islander to come through his department. Inspired by the recent release of the Black DUSP Thesis, he also works alongside his colleagues to advance equity within his department. In the future, he hopes to help establish a pipeline of Pacific Islanders into urban planning.

With both his academic and organizing work, Lee acknowledges he has a lot on his plate. “I am deeply imperfect and often thinly stretched,” he says. “But when things matter so deeply in your bones, the energy just comes. It has to.”