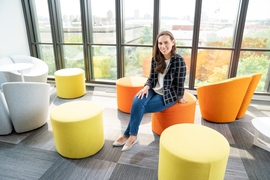 ↓ Download Image
Caption: “The human body is so sensitive to environmental and social conditions,” says Mariana Arcaya. “We should be aiming for cities that are supportive of human health for everyone.”
Credits: Image: Bryce Vickmark

Caption:
“The human body is so sensitive to environmental and social conditions,” says Mariana Arcaya. “We should be aiming for cities that are supportive of human health for everyone.”
Credits:
Image: Bryce Vickmark

Cities have wealth disparities: Picture fancy downtown condos and trendy shopping areas in contrast to, say, streets with rundown housing and boarded-up shops. Cities also have health disparities: People who live in well-off parts of metro areas are less exposed to many of the pollutants, risks, and stresses that lead to long-term health problems.

The health issues are easier to overlook, partly because they are less visible. We don’t necessarily see the factors that create health inequities, such as particulates from freeway pollution that settle in low-income neighborhoods, the lead pipes causing cognitive problems in people who drink from them, the added stress of being poor, or the lack of access to health care that exacerbates other problems for low-income people.

Still, the health gap in cities is real and demands significant scholarly attention. Enter Mariana Arcaya, an associate professor in MIT’s Department of Urban Studies and Planning (DUSP). Arcaya is a specialist in urban health issues, with a broad research portfolio.

Arcaya has studied the health effects of efforts such as the federal Moving to Opportunity program, which relocated families within metropolitan areas (with mixed health effects). She has also examined issues as diverse as the health impact of foreclosure, the considerable prevalence of posttraumatic stress among New Orleans residents displaced by Hurricane Katrina, and even the impact of public transportation on health.

“The human body is so sensitive to environmental and social conditions,” Arcaya notes. “The neighborhoods people live in help determine what we’re exposed to.”

Arcaya has also found that families in Moving to Opportunity program were less likely to move if they already had a sick child. Thus low-income families were, to an extent, trapped by health problems in economically deprived neighborhoods, which themselvs can harm health.

But if Arcaya’s research interests are complex, the moral foundations of her work are simple.

“We should be aiming for cities that are supportive of human health for everyone, rich or poor, and of any race or ethnicity,” says Arcaya.

“All kids should be born into a society where everyone has a fair shot of growing up healthy,” she continues. “When you’re saddled from the beginning with avoidable health problems caused by where you live, those can limit your potential, and that’s unfair.”

That ethical vision has long motived her work, since her days as a school student. Now, for her research and teaching, she has just been awarded tenure at MIT.

“What I’m doing is what I always thought I wanted to be doing,” Arcaya says. “I’m interested in how inequality in place-based opportunity follows people throughout their lives and sets people on different paths, in part by affecting their health.”

Arcaya, who grew up just outside of New York City, has long had a keen interest in environmental issues — “I ran for president of my middle school on basically an environmental platform,” she says, laughing — and in college at Duke University she majored in environmental science and policy. There, she learned about the health problems that environmental degradation can cause — but not necessarily about what to do in response. So she earned an MCP at MIT, from DUSP, focusing on city planning and health.

“A lot of the health problems I was studying stemmed from the built environment, and the way we disregarded the value of the natural environment,” Arcaya says. “I came to MIT to focus on the equity implications of trying to enact change: How do you intervene in a positive way?”

After completing her MIT master’s thesis, Arcaya then earned a PhD at Harvard University’s T.H. Chan School of Public Health, which helped build her public health knowledge and sharpen her scholarly tool kit. At this point — having studied the environment, cities, and health — Arcaya went on the academic job market, while starting a family. She joined the MIT faculty in 2015.

“I gave my job talk eight months pregnant, took advantage of parental leave after the birth of my second child, and bring my kids to work if they’re sent home from daycare sick,” Arcaya says. “Lots of working parents deal with everything from pregnancy discrimination to a lack of paid parental leave, which is simply wrong. I’ve only been able to do my job because I’ve had the benefit of an incredibly supportive environment and great policies.”

Arcaya has been engaged in multiple ambitious projects during her time at the Institute. Over the last couple of years, she has also intensified her interest in setting up long-term study programs that aim to reveal new, in-depth information about cities and health.

One of these, the Healthy Neighborhoods Study, is an in-depth quantitative and qualitative look at nine neighborhoods in Boston, taking what Arcaya calls “a resident-centered approach” to identifying public health problems.

Another is a long-term study of mothers in New Orleans recovering from Hurricane Katrina, extending some of Arcaya’s earlier work about posttraumatic stress. In this project as well, Arcaya and her research partners are collecting information about the life tradeoffs Katrina survivors have made, to understand what Arcaya calls the “realistic complexity” of the issue.

“Disasters have always been a part of life, but the severity and number are expected to go up,” Arcaya says. “What are we going to do about that? How can we expect individuals to respond, and how can we adapt?”

And as income and wealth inequality rises in the U.S., Arcaya has also become an advocate urging urban planners and scholars to develop studies that will further explore the inequities of urban conditions.

“We have become increasingly unequal socioeconomically in this country, which compounds some of the new and worsensing environmental threats we face,” Arcaya says. “That needs to factor into our research on neighborhods and health. Good planning may be one of the most effective public health tools we have.”

3 Questions: An experiment illuminates the value of public transportation

In China, a link between happiness and air quality

3 Questions: Mariana Arcaya on the drivers of health inequality