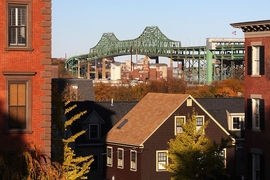 Researchers have long believed that living in high-poverty neighborhoods makes people more likely to suffer debilitating health problems. Now a newly-published study co-authored by an MIT professor suggests a corollary: Families that live in high-poverty neighborhoods and whose children have health problems find it harder to move out of poverty, too.

“If families started out with a sick child in the home, they were much less likely to be able to move to a low-poverty neighborhood,” says Mariana Arcaya, an assistant professor in MIT’s Department of Urban Studies and Planning (DUSP) and co-author of a new paper detailing the study’s results.

The study is based on data collected in the federal government’s Moving to Opportunity (MTO) Program, a randomized experiment launched in 1994 in which low-income families received vouchers enabling them to move to new neighborhoods. The idea, in part, was that living in wealthier (and likely safer) areas might help the families in the program improve their own financial circumstances.

The program involved about 5,000 American families in five cities: Baltimore, Boston, Chicago, Los Angeles, and New York. The new study found that among families given the chance to move to low-poverty neighborhoods, 50 percent of families in MTO without health issues actually did so, whereas only 38 percent of families did so when already coping with a child-health problem. Moreover, families with child illnesses who did move settled into neighborhoods where the poverty rate was 2.5 percentage points higher, on average, than the places where families without child-health problems settled.

“Movers that had a sick child were moving to slightly poorer neighborhoods,” Arcaya says. “Having that additional challenge in the family restricted people’s options.”

The paper, “Health Selection into Neighborhoods Among Families in the Moving to Opportunity Program,” appears in the American Journal of Epidemiology. Arcaya is a corresponding author, along with Corina Graif, an assistant professor of sociology and criminology at Pennsylvania State University. The paper’s other two authors are Mary C. Waters, a professor of sociology at Harvard University; and S.V. Subramanian, a professor of population health and geography at the Harvard T.H. Chan School of Public Health.

The study examined the relocation of families while MTO was operating from 1994 to 1997; it also assessed the neighborhood poverty rate at a follow-up interval, in 2002, and the total time families spent living in the higher-income neighborhoods to which they moved.

The nature of the data collected in the MTO programs does not make it possible to conclude precisely why families with child-health issues were less likely to move. Still, Arcaya is willing to suggest a few possible mechanisms at work.

“One is a bandwidth issue,” she says. “It’s a lot of work to try to find new housing in a different and more expensive neighborhood. It takes a lot of visiting and transportation and coordinating.” For poorer families, that burden may become too great when extra care of a child is needed.

Secondly, Arcaya suggests, the true costs of moving may be higher for families with sick children because it would mean disrupting the ad-hoc kinds of support networks families often patch together in order to provide care for their children.

“People who have complicated challenges like caring for a sick child may be cobbling together support from informal sources,” Arcaya notes. Grandparents, relatives, and neighbors may all be instrumental in looking after kids. “Taking that system and saying, ‘We’re going to move,’ is a really challenging thing.”

Finally, Arcaya observes that families coping with health challenges may be resistant to the higher living costs that could come with a move, even if they can nominally afford it. Unexpected health care costs or the unpaid time off work that comes with caring for a sick child might leave them in a precarious position, if they have a smaller financial cushion.

“There might be some risk aversion,” Arcaya adds. “There’s this well-understood phenomenon, you get sick and that causes individual financial problems. … The risk of moving may be a little bit too much [for some families] if they are trying to maintain instrumental social networks and save money for when illness-related expenses arise.”

Still, other scholars find the result to be interesting. Douglas Massey, a sociologist at Princeton University, says the findings are “not definitive, but persuasive since the data are longitudinal,” that is, tracking families over time.

Massey adds that the study indicates the need for such programs to offer participants more active guidance. MTO, he states, “basically offered people a voucher and did little else. If these programs are to work, you need to intervene with people and show them how to navigate housing markets and make them aware of opportunities.”

For her part, Arcaya says she hopes the study will bring more attention to the ways health issues can constrain social mobility and economic opportunity. And the findings suggest that urban planners and policymakers, especially those who have looked at housing issues as a key to social mobility, may also want to consider the way health matters interact with social geography. As the paper states, we may persistently “undervalue direct investment in healthcare as a poverty deconcentration tool that could give poor families more social and economic choices,” at least in urban areas.

“If health affects neighborhood choice, we need to know that,” Arcaya says.

Support for the study came, in part, from the National Science Foundation, and the Robert Wood Johnson Foundation.