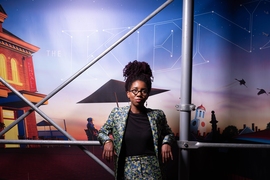 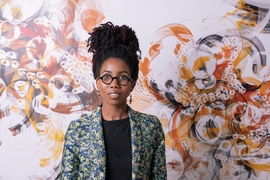 It’s Wednesday morning and Brooke Wages is standing in front of a whiteboard, bouncing ideas off her startup partner Sarika Ram, a rising junior at Boston University, and writing out a game plan for the rest of the day. It’s early, but Wages is focused and energetic about the work ahead of her. You can tell that she is, to use one of her favorite phrases, killing the game.

Wages and her team have just finished interviewing formerly incarcerated individuals who are now seeking job training and placement through the team’s startup, Surge Employment Solutions, which aims to place people in well-paid, high-skilled trade jobs after they have served time in prison. Today Wages and Ram are planning out the next few months of their pilot program, during which they will start training their selected candidates for their future jobs. By November, the selected candidates will be working their new positions.

Wages is in the dual-degree master’s of business administration and master’s of public administration program at the MIT Sloan School of Management and the Harvard Kennedy School of Government. She founded Surge last year, along with Ram and rising Harvard University sophomore Amisha Kambath. The team has partnered with the Boston Mayor’s Office of Returning Citizens, the Massachusetts Parole Board, Dorchester Bay Economic Development Corporation, and Strive Boston in their outreach to formerly incarcerated citizens.

Her interest in this area began when she was an undergraduate at North Carolina State University. A mechanical engineering major, she also began to study inequality and the discrimination faced by citizens returning to the workforce after incarceration. Wages was particularly influenced by the late sociologist Devah Pager, especially her book “Marked: Race, Crime, and Finding Work in an Era of Mass Incarceration.” Pager’s research documents discrimination against ex-offenders in the job market and how this bias contributes to recidivism, particularly among black men.

Upon learning about these injustices, “I felt moved,” Wages recalls. “I felt like there was a fire inside to do this work.”

After graduating, Wages started working as an engineer in the oil and gas industry, but she still found time to work with former inmates seeking employment. She volunteered with the National Alliance for the Empowerment of the Formerly Incarcerated (NAEFI) and attended reentry circles, which welcome a returning citizen back into a community and establish a support system. Through this work, she got to know people coming out of the prison system.

“[Discrimination against the formerly incarcerated] became more than just this appalling thing that I read about. It became someone’s life story. I really recognized how we had equal value, but I just, by the luck of the draw, happened to be born in a different place” than many of the former inmates she had been meeting through NAEFI, Wages says.

In her engineering work, Wages was finding it difficult to find contractors for highly skilled trade jobs. Meanwhile, she was getting to know people having a hard time finding employment after their release. Taking these two contrasting experiences to heart, Wages founded Surge.

Wages emphasizes that Surge should not be characterized as solely a staffing company or a workforce development company. Rather, the startup assesses a client’s staffing needs, trains returning citizens, and places them in specific roles in the client’s company. The organization does not start training people unless they have a job secured for them first.

“We talk to the client, understand their needs and then develop a unique, personalized training program for that specific position,” she says. “That’s a business model that is not currently being used for the formerly incarcerated population.”

The team currently works out of the Boston University BUild Lab IDG Capital Student Innovation Center as part of the university’s Summer Accelerator Program. Surge also recently won $10,000 from the IDEAS Global Challenge from MIT’s PKG Center, which has also been crucial in funding the startup.

Among the classes in her Sloan program that have been particularly formative, Wages cites 15.S03 (Leading the Way: Perspectives on Advancing Equity and Inclusion), for giving her tools to create systems within her own business to promote equity and inclusion.

“The course provided me with a startup reference guide. We read and discussed the leading evidence-based diversity and inclusion research on topics such as hiring, pay, performance evaluation, identity bias, and harassment, to name a few,” she says. “Just as we acknowledge and address the bias reentering people face in the job market, we need to acknowledge our brain’s proclivity toward bias and build systems that help eliminate that.”

Wages says much of her success has resulted from connections she has made through her extracurricular activities, such as The Educational Justice Institute (TEJI) at MIT, where she is a graduate fellow. TEJI has provided significant mentorship and support to Wages and her team.

Through TEJI, Wages was a teaching assistant for an “inside-out” class on nonviolent philosophy. The class, ES.114 (Non-violence as a Way of Life), taught by humanities lecturer Lee Perlman of the MIT Experimental Study Group, was based in a prison and comprised half undergraduate students and half incarcerated students. Because it was a discussion-based course, Wages says, all of the students in the class had the opportunity to share life experiences and understand different perspectives. She enjoyed facilitating that process and seeing the strong relationships it helped create among the students.

Wages also serves as the events chair for MIT’s Black Business Students Association and is a fellow at the Forté Foundation, an organization that empowers women in business. She has also gone on the FoundHers retreat for female entrepreneurs, where she connected with other women who have founded startups.

“[Brooke] is a great mentor,” Ram says. “She has lots of undergrads that she takes under her wing.”

Wages has also formed a strong bond with her team and stresses that Surge would not be possible without Ram and Kambath. The trio’s personal relationship is important to Wages, and the group often spends time together outside of work. They take art and dance classes together, for example, and they are prepping for an upcoming Indian movie marathon.

Wages can also be found at the dog park virtually every day, with her dog Grace. “She is the best. She is a chihuahua-heeler mix and all-black — all-black everything, that’s how we operate!” Wages jokes.

Above all of the personal and professional relationships that Wages has created in Boston, her connection to her Christian faith remains as one of the most important things in her life. She is particularly driven by one piece of scripture, in Hebrew 13:3: “Remember those in prison as if you were their fellow prisoners, and those who are mistreated as if you yourselves were suffering.”

Looking at justice through the lens of political theory

Breaking down walls between the ivory tower and prison