Fikile Brushett is looking for new ways to store energy 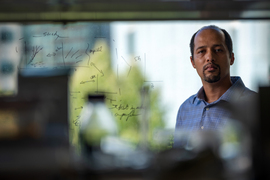 Caption:
Fikile Brushett, an MIT associate professor of chemical engineering, leads a group dedicated to developing more efficient ways to store energy, including batteries that could be used to store the energy generated by wind and solar power.
Credits:
Image: Jared Charney

Fikile Brushett, an MIT associate professor of chemical engineering, had an unusual source of inspiration for his career in the chemical sciences: the character played by Nicolas Cage in the 1996 movie “The Rock.” In the film, Cage portrays an FBI chemist who hunts down a group of rogue U.S. soldiers who have commandeered chemical weapons and taken over the island of Alcatraz.

“For a really long time, I really wanted to be a chemist and work for the FBI with chemical warfare agents. That was the goal: to be Nick Cage,” recalls Brushett, who first saw the movie as a high school student living in Silver Spring, Maryland, a suburb of Washington.

Though he did not end up joining the FBI or working with chemical weapons — which he says is probably for the best — Brushett did pursue his love of chemistry. In his lab at MIT, Brushett leads a group dedicated to developing more efficient and sustainable ways to store energy, including batteries that could be used to store the electricity generated by wind and solar power. He is also exploring new ways to convert carbon dioxide to useful fuels.

“The backbone of our global energy economy is based upon liquid fossil fuels right now, and energy demand is increasing,” he says. “The challenge we’re facing is that carbon emissions are tied very tightly to this increasing energy demand, and carbon emissions are linked to climate volatility, as well as pollution and health effects. To me, this is an incredibly urgent, important, and inspiring problem to go after.”

“A body of knowledge”

Brushett’s parents immigrated to the United States in the early 1980s, before he was born. His mother, an English as a second language teacher, is from South Africa, and his father, an economist, is from the United Kingdom. Brushett grew up mostly in the Washington area, with the exception of four years spent living in Zimbabwe, due to his father’s work at the World Bank.

Brushett remembers this as an idyllic time, saying, “School ended at 1 p.m., so you almost had the whole afternoon to do sports at school, or you could go home and just play in the garden.”

His family returned to the Washington area while he was in sixth grade, and in high school, he started to get interested in chemistry, as well as other scientific subjects and math.

“I remember really having a hard time with chemE for a while, and I was fortunate enough to have a really good academic advisor who said, ‘Listen, chemE is hard for some people. Some people get it immediately, for some people it takes a little while for it to sink in,’” he says. Around his junior year, concepts started to fall into place, he recalls. “Rather than looking at courses as self-contained units, the units started coming together and flowing into a body of knowledge. I was able to see the interconnections between courses.”

While he was originally most interested in molecular biotechnology — the field of engineering proteins and other biological molecules — he ended up working in a reaction engineering lab with his academic advisor, John Vohs. There, he studied how catalytic surfaces influence chemical reactions. At Vohs’ recommendation, he applied to the University of Illinois at Urbana-Champaign for graduate school, where he worked on electrochemistry projects. With his PhD advisor, Paul Kenis, he developed microfluidic fuel cells that could run on a variety of different fuels as portable power sources.

During his third year of graduate school, he began applying for faculty positions and was offered a job at MIT, which he accepted but deferred for two years so he could do a postdoc at Argonne National Laboratory. There, he worked with scientists and engineers doing a wide range of research on electrochemical energy storage, and became interested in flow batteries, which is now one of the major focus areas of his lab at MIT.

Unlike the rechargeable lithium-ion batteries that power our cell phones and laptops, flow batteries use large tanks of liquid to store energy. Such batteries have traditionally been prohibitively expensive because they rely on pricey electroactive metal salts. Brushett is working on alternative approaches that use less expensive electroactive materials derived from organic compounds.

Such batteries could be used to store the power intermittently produced by wind turbines and solar panels, making them a more reliable, efficient, and cost-effective source of energy. His lab also works on new processes for converting carbon dioxide, a waste product and greenhouse gas, into useful fuels.

In a related area of research, Brushett’s lab performs “techno-economic” modeling of potential new technologies, to help them assess what aspects of the technology need the most improvement to make them economically feasible.

Once those targets are identified, researchers working in those areas have a better idea of what they need to focus on to make a particular technology work, Brushett says.

“That’s the thing I’ve been most proud of from our research — hopefully opening up or demystifying the field and allowing a more diverse set of researchers to enter and to add value, which I think is important in terms of growing the science and developing new ideas,” he says.