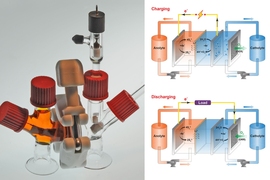 ↓ Download Image
Caption: MIT researchers have developed an “air-breathing” battery that could store electricity for very long durations for about a third the price of current technologies, with minimal location restraints and zero emissions. 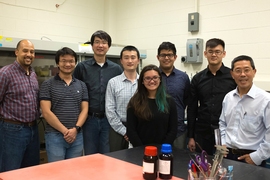 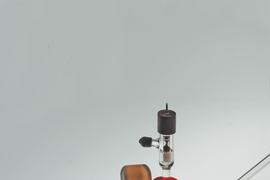 ↓ Download Image
Caption: MIT researchers have developed an “air-breathing” battery that could store electricity for very long durations for about a third the price of current technologies, with minimal location restraints and zero emissions.
Credits: Photo: Felice Frankel.

Caption:
MIT researchers have developed an “air-breathing” battery that could store electricity for very long durations for about a third the price of current technologies, with minimal location restraints and zero emissions.

Wind and solar power are increasingly popular sources for renewable energy. But intermittency issues keep them from connecting widely to the U.S. grid: They require energy-storage systems that, at the cheapest, run about $100 per kilowatt hour and function only in certain locations.

Now MIT researchers have developed an “air-breathing” battery that could store electricity for very long durations for about one-fifth the cost of current technologies, with minimal location restraints and zero emissions. The battery could be used to make sporadic renewable power a more reliable source of electricity for the grid.

For its anode, the rechargeable flow battery uses cheap, abundant sulfur dissolved in water. An aerated liquid salt solution in the cathode continuously takes in and releases oxygen that balances charge as ions shuttle between the electrodes. Oxygen flowing into the cathode causes the anode to discharge electrons to an external circuit. Oxygen flowing out sends electrons back to the anode, recharging the battery.

“This battery literally inhales and exhales air, but it doesn’t exhale carbon dioxide, like humans — it exhales oxygen,” says Yet-Ming Chiang, the Kyocera Professor of Materials Science and Engineering at MIT and co-author of a paper describing the battery. The research appears today in the journal Joule.

The battery’s total chemical cost — the combined price of the cathode, anode, and electrolyte materials — is about 1/30th the cost of competing batteries, such as lithium-ion batteries. Scaled-up systems could be used to store electricity from wind or solar power, for multiple days to entire seasons, for about $20 to $30 per kilowatt hour.

Co-authors with Chiang on the paper are: first author Zheng Li, who was a postdoc at MIT during the research and is now a professor at Virginia Tech; Fikile R. Brushett, the Raymond A. and Helen E. St. Laurent Career Development Professor of Chemical Engineering; research scientist Liang Su; graduate students Menghsuan Pan and Kai Xiang; and undergraduate students Andres Badel, Joseph M. Valle, and Stephanie L. Eiler.

Development of the battery began in 2012, when Chiang joined the Department of Energy’s Joint Center for Energy Storage Research, a five-year project that brought together about 180 researchers to collaborate on energy-saving technologies. Chiang, for his part, focused on developing an efficient battery that could reduce the cost of grid-scale energy storage.

A major issue with batteries over the past several decades, Chiang says, has been a focus on synthesizing materials that offer greater energy density but are very expensive. The most widely used materials in lithium-ion batteries for cellphones, for instance, have a cost of about $100 for each kilowatt hour of energy stored.

“This meant maybe we weren’t focusing on the right thing, with an ever-increasing chemical cost in pursuit of high energy-density,” Chiang says. He brought the issue to other MIT researchers. “We said, ‘If we want energy storage at the terawatt scale, we have to use truly abundant materials.’”

The researchers first decided the anode needed to be sulfur, a widely available byproduct of natural gas and petroleum refining that’s very energy dense, having the lowest cost per stored charge next to water and air. The challenge then was finding an inexpensive liquid cathode material that remained stable while producing a meaningful charge. That seemed improbable — until a serendipitous discovery in the lab.

On a short list of candidates was a compound called potassium permanganate. If used as a cathode material, that compound is “reduced” — a reaction that draws ions from the anode to the cathode, discharging electricity. However, the reduction of the permanganate is normally impossible to reverse, meaning the battery wouldn’t be rechargeable.

Still, Li tried. As expected, the reversal failed. However, the battery was, in fact, recharging, due to an unexpected oxygen reaction in the cathode, which was running entirely on air. “I said, ‘Wait, you figured out a rechargeable chemistry using sulfur that does not require a cathode compound?’ That was the ah-ha moment,” Chiang says.

Using that concept, the team of researchers created a type of flow battery, where electrolytes are continuously pumped through electrodes and travel through a reaction cell to create charge or discharge. The battery consists of a liquid anode (anolyte) of polysulfide that contains lithium or sodium ions, and a liquid cathode (catholyte) that consists of an oxygenated dissolved salt, separated by a membrane.

Upon discharging, the anolyte releases electrons into an external circuit and the lithium or sodium ions travel to the cathode. At the same time, to maintain electroneutrality, the catholyte draws in oxygen, creating negatively charged hydroxide ions. When charging, the process is simply reversed. Oxygen is expelled from the catholyte, increasing hydrogen ions, which donate electrons back to the anolyte through the external circuit.

“What this does is create a charge balance by taking oxygen in and out of the system,” Chiang says.

Because the battery uses ultra-low-cost materials, its chemical cost is one of the lowest — if not the lowest — of any rechargeable battery to enable cost-effective long-duration discharge. Its energy density is slightly lower than today’s lithium-ion batteries.

“It’s a creative and interesting new concept that could potentially be an ultra-low-cost solution for grid storage,” says Venkat Viswanathan, an assistant professor of mechanical engineering at Carnegie Mellon University who studies energy-storage systems.

Lithium-sulfur and lithium-air batteries — where sulfur or oxygen are used in the cathode — exist today. But the key innovation of the MIT research, Viswanathan says, is combining the two concepts to create a lower-cost battery with comparable efficiency and energy density. The design could inspire new work in the field, he adds: “It’s something that immediately captures your imagination.”

The prototype is currently about the size of a coffee cup. But flow batteries are highly scalable, Chiang says, and cells can be combined into larger systems.

As the battery can discharge over months, the best use may be for storing electricity from notoriously unpredictable wind and solar power sources. “The intermittency for solar is daily, but for wind it’s longer-scale intermittency and not so predictable. When it’s not so predictable you need more reserve — the capability to discharge a battery over a longer period of time — because you don’t know when the wind is going to come back next,” Chiang says. Seasonal storage is important too, he adds, especially with increasing distance north of the equator, where the amount of sunlight varies more widely from summer to winter.

Chiang says this could be the first technology to compete, in cost and energy density, with pumped hydroelectric storage systems, which provide most of the energy storage for renewables around the world but are very restricted by location.

“The energy density of a flow battery like this is more than 500 times higher than pumped hydroelectric storage. It’s also so much more compact, so that you can imagine putting it anywhere you have renewable generation,” Chiang says.

The research was supported by the Department of Energy.

HuffPost reporter Thomas Tamblyn writes that MIT researchers have developed a new “air-breathing” battery that can store electricity for months. The new battery could harvest, “the vast wind energy waiting to be captured in the North Atlantic, store it for months on end and then release it into the grid for a fraction of the cost that we’re currently paying.”