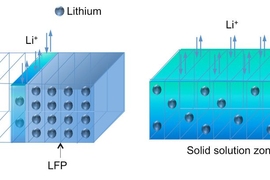 ↓ Download Image
Caption: Diagram illustrates the process of charging or discharging the lithium iron phosphate (LFP) electrode. As lithium ions are removed during the charging process, it forms a lithium-depleted iron phosphate (FP) zone, but in between there is a solid solution zone (SSZ, shown in dark blue-green) containing some randomly distributed lithium atoms, unlike the orderly array of lithium atoms in the original crystalline material (light blue). This work provides the first direct observations of this SSZ phenomenon.
Credits: Illustration courtesy of the authors

Caption:
Diagram illustrates the process of charging or discharging the lithium iron phosphate (LFP) electrode. As lithium ions are removed during the charging process, it forms a lithium-depleted iron phosphate (FP) zone, but in between there is a solid solution zone (SSZ, shown in dark blue-green) containing some randomly distributed lithium atoms, unlike the orderly array of lithium atoms in the original crystalline material (light blue). This work provides the first direct observations of this SSZ phenomenon.
Credits:
Illustration courtesy of the authors

New observations by researchers at MIT have revealed the inner workings of a type of electrode widely used in lithium-ion batteries. The new findings explain the unexpectedly high power and long cycle life of such batteries, the researchers say.

The electrode material studied, lithium iron phosphate (LiFePO4), is considered an especially promising material for lithium-based rechargeable batteries; it has already been demonstrated in applications ranging from power tools to electric vehicles to large-scale grid storage. The MIT researchers found that inside this electrode, during charging, a solid-solution zone (SSZ) forms at the boundary between lithium-rich and lithium-depleted areas — the region where charging activity is concentrated, as lithium ions are pulled out of the electrode.

Li says that this SSZ “has been theoretically predicted to exist, but we see it directly for the first time,” in transmission electron microscope (TEM) videos taken during charging.

The observations help to resolve a longstanding puzzle about LiFePO4: In bulk crystal form, both lithium iron phosphate and iron phosphate (FePO4, which is left behind as lithium ions migrate out of the material during charging) have very poor ionic and electrical conductivities. Yet when treated — with doping and carbon coating — and used as nanoparticles in a battery, the material exhibits an impressively high charging rate. “It was quite surprising when this [rapid charging and discharging rate] was first demonstrated,” Li says.

“We directly observed a metastable random solid solution that may resolve this fundamental problem that has intrigued [materials scientists] for many years,” says Li, the Battelle Energy Alliance Professor of Nuclear Science and Engineering and a professor of materials science and engineering.

The SSZ is a “metastable” state, persisting for at least several minutes at room temperature. Replacing a sharp interface between LiFePO4 and FePO4 that has been shown to contain many additional line defects called “dislocations,” the SSZ serves as a buffer, reducing the number of dislocations that would otherwise move with the electrochemical reaction front. “We don’t see any dislocations,” Li says. This could be important because the generation and storage of dislocations can cause fatigue and limit the cycle life of an electrode.

Unlike conventional TEM imaging, the technique used in this work, developed in 2010 by Kushima and Li, makes it possible to observe battery components as they charge and discharge, which can reveal dynamic processes. “In the last four years, there has been a big explosion of using such in situ TEM techniques to study battery operations,” Li says.

A better understanding of these dynamic processes could improve the performance of an electrode material by allowing better tuning of its properties, Li says.

Despite an incomplete understanding to date, lithium iron phosphate nanoparticles are already used at an industrial scale for lithium-ion batteries, Li explains. “The science is lagging behind the application,” he says. “It’s already scaled up and quite successful on the market. It’s one of the success stories of nanotechnology.”

“Compared to traditional lithium-ion, [lithium iron phosphate] is environmentally friendly, and very stable,” Niu says. “But it’s important for this material to be well understood.”

Chongmin Wang, a research scientist at the Pacific Northwest National Laboratory who was not involved in this research, calls this paper “great work.”

“Several models based on both theoretical and experimental work have been proposed,” Wang says. “However, none of them appears to be conclusive.”

This new research, he says, “provides convincing and direct evidence” of the mechanism at work: “The work is a major step forward for pushing the ambiguities toward favoring a solid solution model.”

The research was supported by the National Science Foundation.