Designing for place and space 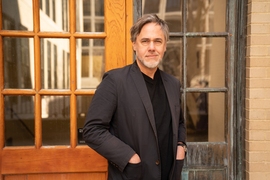 What makes a building great? To Rafi Segal, it is never just the form of a structure that counts. What matters is the way a building fits its surroundings and responds to its social and cultural environment.

Segal, an associate professor of architecture at MIT, has gained note as a practitioner whose refined contemporary designs interact extensively with their settings — often featuring open spaces, irregular shapes, and creative multilevel configurations on sloping sites. From museums to homes, Segal is always trying to ensure that a building’s formal space and its chosen place respond to each other.

“Architecture seeks a balance between creating its internal world and making you realize the qualities of the place you’re in,” Segal says, “whether it’s in a city, a landscape, or the places in between.”

For Segal, those places often are cities. One of his designs, the Palmach History Museum in Tel Aviv (designed with architect Zvi Hecker), which focuses on modern Israeli history, features a series of retaining walls creating courtyard space on a sloping, elevated site — while much of the museum’s display space sits underground. It is one of several museums for which Segal has developed innovative and well-received designs.

Other Segal designs are not urban. A Prototype Village House for Rural Lands, outside of Kigali, Rwanda, a result of a 2017 workshop Segal led, deploys a sturdy brick construction along with natural ventilation and a flexible layout, as a model for low-cost housing in Rwanda’s rural areas.

Segal’s Kitgum Peace Museum in Uganda, meanwhile, is an open-walled, roughly rectangular structure that forms a courtyard on its interior and creates a path for displays on its exterior. The site is intended as a memorial to victims of civil conflict and a museum of cultural heritage.

On a rather different note, but in a nod to Segal’s stylistic influences, he has recently worked with Sara Segal to restore the Lauck House in Princeton, New Jersey — a classic midcentury residence by Marcel Breuer, the esteemed Bauhaus designer. As varied as all these efforts are, Segal sees commonalities among them.

“I’m looking for ways buildings can interact with their environments — using the roof as an active surface, or by incorporating open space as part of the design, creating openness within buildings, and allowing nature in,” Segal says.

For his research, design work, and teaching, Segal was granted tenure at MIT in 2019.

Segal’s current occupation might surprise people who knew him as a youngster. Growing up in Israel, Segal had a clear sense of what he wanted to do with his life — and it didn’t involve designing buildings.

“I didn’t think about being an architect,” Segal says. “I wanted to go into music.”

After he had completed secondary school and was nearing the end of his service in the Israeli army, Segal started thinking more seriously about architecture. In so doing, he received encouragement from his family, who, Segal says, was doubtful about his ability to make a living as a musician, and suddenly crafted various tales meant to convince him about his aptitude for the field.

“All these childhood stories came up, that I was destined for architecture,” Segal says. “My grandfather said, ‘When you were four, you drew in 3D.’ My mother said, ‘You always know how to organize the house.’ But growing up, I did have a strong sense of the visual arts. I did have talent for drawing.”

Segal attended architecture school as an undergraduate at the Technion – Israel Institute of Technology, in Haifa, where he received first a bachelor’s degree in architecture, then a master’s. Crucially, Segal says, “at Technion, we studied the design of buildings and of the urban environment as one and the same …  town planning was part of the curriculum.”

Segal then received his PhD in architecture from Princeton University. His career combines professional design and extensive academic research. His books include “Space Packed: The Architecture of Alfred Neumann” (2018), and he has been a co-editor of three other books.

Segal has taught architecture and urban studies at multiple institutions, including Harvard University, Columbia University, the Cooper Union, and Princeton, and has been at MIT since 2015.

“MIT is a great fit for me,” says Segal, who currently directs MIT’s SMArchS Urbanism program (the Master of Science in Architecture Studies with a concentration in Urbanism), and teaches classes about urbanism. “At MIT, students gain tools to examine the development of current cities and explore new forms of urbanity, new ideas on how and where the future city will take shape.”

In line with this thinking, Segal recently established the Future Urban Collectives Lab at MIT, which examines the power of architecture to shape new forms of collectivity in today’s “sharing economy.”

As a practitioner, Segal’s design work has been shown in Berlin, Rotterdam, the Museum of Modern Art in New York, the Venice Biennale of Architecture, and the Hong Kong/Shenzhen Urbanism Biennale. Recently, Segal has also been engaged in an extensive, multifaceted research project which will have a public airing at the 2020 Venice Biennale. The exhibit, which will be called “Open Collectives,” imagines ways in which digital and physical space work together to strengthen emerging communities.

Segal has been working on such collective design issues for years; he led the design of a new neighborhood for multiple kibbutzim in Israel.

“Kibbutzim were an early modernist project that can inform in many ways the increase in cooperative living and working [today],” Segal says. “We know that in today’s gig economy, structural inequities can be pronounced. I’m interested in finding ways in which the design of buildings and cities can help transform society. … Architecture can play a key role in strengthening socioeconomic equity.”

Some of Segal’s ideas that will be on display in Venice also pertain to elders and caregivers; market places for emerging economies in the developing world; and affordable co-living and multifamily housing amid dense urban centers and in the urban periphery.

“The issues I work on may seem disparate, but they all share the common thread of meeting urgent needs that call for creative, forward-thinking design,” Segal says. “Urban living and communities are evolving — this is an exciting front line that the Future Urban Collectives Lab explores, and where architecture needs to be.”