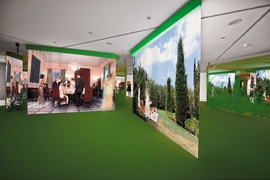 ↓ Download Image
Caption: Judith Barry's installation "Study for the Mirror and Garden" uses video and special effects, along with architectural mirroring, to evoke the secret gardens, hidden meanings, and picaresque narratives of the “converso” tradition in Spanish literature and culture — which allowed banished cultures to survive by hiding in plain sight.
Credits: Courtesy of Judith Barry and Mary Boone Gallery, NYC 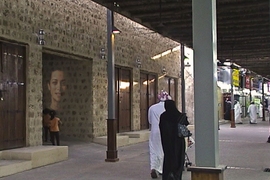 ↓ Download Image
Caption: Judith Barry's work " … Cairo stories" involves a series of recorded stories, based on personal interviews. Initiated in 2003 at the beginning of the Iraq War, the project explores the many different ways that Cairene women negotiate the ideological, cultural and economic conditions of their milieu.
Credits: Courtesy of Judith Barry and Mary Boone Gallery, NYC

Caption:
Judith Barry's installation "Study for the Mirror and Garden" uses video and special effects, along with architectural mirroring, to evoke the secret gardens, hidden meanings, and picaresque narratives of the “converso” tradition in Spanish literature and culture — which allowed banished cultures to survive by hiding in plain sight.
Credits:
Courtesy of Judith Barry and Mary Boone Gallery, NYC

Caption:
Judith Barry's work " … Cairo stories" involves a series of recorded stories, based on personal interviews. Initiated in 2003 at the beginning of the Iraq War, the project explores the many different ways that Cairene women negotiate the ideological, cultural and economic conditions of their milieu.
Credits:
Courtesy of Judith Barry and Mary Boone Gallery, NYC

For the first half of 2018, a large contemporary artwork greeted people entering the famed Isabella Stewart Gardner Museum in Boston. An image two stories high on the museum’s façade showed people in a refugee boat looking upward — where a drone was taking photos.

“Global Displacement,” stated text printed over the image. “1 in 100 people worldwide are displaced from their homes.”

The installation was the work of Judith Barry, a prominent contemporary American artist and the new director of the MIT Program in Art, Culture and Technology (ACT). Like much of Barry’s oeuvre, this work was attention-grabbing, but with subtle twists. For example, the people in the original photo had been replaced by portraits of faces gazing upward, taken by associates in Barry’s studio.

Those looking closely at the work might find themselves asking new questions. For instance: What if you recognized people in refugee boats, or saw them as people much like yourself?

“Art constructs a space that people can inhabit,” Barry says. “And when you enter into the space that art makes, if you engage with the work in that space, other kinds of experiences are possible.”

Over three decades, Barry has gained acclaim while making new spaces for people to inhabit in galleries around the world. She has created video installations for major museums, performance art pieces, collages, and much more, all while exploring socially relevant topics.

“I don’t have a signature style,” Barry says. “The form and the content are derived from my research process. And that’s been the case since the very beginning.”

That applies to works such as the Gardner mural among many others she has developed. Barry’s acclaimed 2011 work, “Cairo Stories,” was a video installation based on 215 interviews with Egyptian women describing the conditions of daily life they encounter, and took nearly a decade to complete; it was reinstalled at the Mary Boone gallery in New York City this fall.

“I met many people across Egyptian society that I never would have gotten to know had I done the project in a shorter period of time,” Barry says. “It took many years, and the experience was profoundly moving.”

Barry’s emphasis on research, innovation, and social relevance all make her a natural fit at MIT; Barry joined the Institute in January 2018 as a professor with tenure and head of ACT.

A training in space

Barry was born in Columbus, Ohio, although, as she recounts of her life growing up, “We were moving all the time.” Like some other kids who move a lot, Barry developed some transportable skills — “I could draw, and I was athletic” — which, in her case, included dance. As an undergraduate at the University of California at Berkeley, Barry studied architecture, and subsequently found herself working for a large firm in the field.

“I got to design bathrooms and hallways and HVAC systems — all the things young architects do,” Barry says. “That was not interesting. But when I began taking art classes, another world opened to me.”

Indeed, Barry soon realized that art was a place where she could combine many of her interests. Inspired in part by the renowned artist (and MIT professor emerita) Joan Jonas, Barry developed performance art pieces in San Francisco in the 1970s. Before long she had expanded her repertoire to include video art installations. Indeed, as a leading video-art practitioner, Barry had exhibitions in venues such as the New York’s Whitney Museum fairly soon after leaving art school (at the San Francisco Art Institute).

“It was so different then,” Barry says of the 1970s art scene — meaning it was more open to newcomers of many backgrounds. By the late 1980s, she thinks, careers in the field had already begun to depend more on professionalized study, with graduate art degrees becoming the norm for many aspiring artists.

Still, as Barry notes, education is highly valuable. She herself has often used her architectural training in her career as an artist.

“When you’re in the space of an art exhibition, art happens at that moment when the viewer and the artwork come into contact,” Barry says. “It doesn’t necessarily carry over into daily life or another experience. But there are those moments when you encounter an artwork and something happens — it’s the sense of discovery and your engagement that produces an art experience. I try to set places where this can happen when I design my work. I use my architecture training as a methodology to interrogate space, so that in certain spots, something happens spatially that might keep you engaged.”

All told, Barry has been a prolific artist and gained international recognition for her challenging works. Among other honors, she received the Frederick Kiesler Prize for Architecture and the Arts in 2000, the “Best Pavilion” award at the Cairo Biennale in 2001, and a Guggenheim Fellowship in 2011. Barry’s work has been displayed multiple times at the Venice Biennale, the Whitney, and biennales in Berlin, Nagoya Biennale, Sao Paolo, Sydney, Sharjah (in the United Arab Emirates, where “Cairo Stories” debuted), among others.

Along the way, Barry spent one academic year teaching at MIT, in 2002-03, and says she is eager to explore new possibilities for teaching and creating art at ACT.

Among other things, Barry notes, artists are grappling with issues of diversity in evolving ways: “In terms of culture, you have to ask, what is culture today? It is not one unified culture, but composed of many diverse cultures which are reflected in the student population at MIT.”

Barry finds herself in an interesting position with regard to technology, as well. She has often used technologies in her work, even while depicting tensions that arise in part from technological forces.

“Now we’re living in a technology-anxious time, where you read article after article about AI and robots taking over the world,” Barry says. “One of the major issues about technology facing society is your privacy, for instance. Or the anxiety that because machines do not rely on visual language, the need for mimesis [the depiction of things] will disappear. I hope questions about how technology affects daily life will become part of a much broader public debate.”

Indeed, Barry adds, “Artists are often charged with the task of representation — in other words, finding ways to make these issues visible. Art has an important role to play in this discussion.”