Artist and scholar cited for her “immeasurable impact” in pioneering the integration of performance art and new media.
School of Architecture and Planning
Publication Date:
Press Inquiries 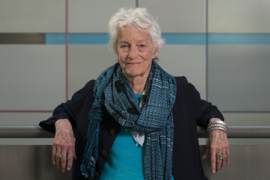 Joan Jonas, professor emerita in the MIT Program in Art, Culture and Technology, is one of three individuals honored with the 2018 Kyoto Prize.

The Kyoto Prize is Japan’s highest private award for global achievement, created by Japanese philanthropist Kazuo Inamori and awarded by the Inamori Foundation. As part of the prize, Jonas will receive a diploma, a gold Kyoto Prize medal, and 100 million yen (approximately $915,000) at a ceremony in Kyoto, Japan, on Nov. 10.

“Joan is a giant and she deserves all recognition for a lifetime of superlative achievements,” says Hashim Sarkis, dean of the MIT School of Architecture and Planning. “Yet the Kyoto Prize cannot overshadow the work that is to come — the continuously bold, experimental work, the eternally youthful outlook, and her perpetually poetic insights into our world’s problems. Her best work will always be her next work.”

Awarded annually in three categories — Advanced Technology, Basic Sciences, and Arts and Philosophy — the prize honors individuals who have contributed significantly to the scientific, cultural, and spiritual betterment of humankind. Jonas is this year’s recipient in the Arts and Philosophy category for her lifetime of accomplishment and global influence as an artist.

“Jonas created a new artistic form by integrating performance art and video art, and has evolved her original medium at the forefront of contemporary art continuously,” the prize announcement states. “Creating labyrinth-like works that lead audiences to diverse interpretations, she hands down the legacy of 1960s avant-garde art by developing it into a postmodern framework, profoundly impacting artists of later generations.”

More than 50 years of influence in the arts

Trained in art history and sculpture, Jonas was a central figure in the performance art movement of the late 1960s, and her experiments and productions in the late 1960s and early 1970s continue to be crucial to the development of many contemporary art genres, from performance and video to conceptual art and theater. Since 1968, her practice has explored ways of seeing, the rhythms of ritual, and the authority of objects and gestures.

The Inamori Foundation cited “Vertical Roll,” a Jonas piece from 1972 that integrated a performance with its real-time video screened on a TV monitor, as an archetype of the genre and her practice. “This work featured a revolutionary structure of coexistence of a live performance and its represented image,” the foundation stated, “with a discrepancy in time and space between the audience’s viewpoints and camera angles, as well as the effect of electrical delay within the system.”

Jonas received a BA in art history from Mount Holyoke College in 1958, studied sculpture at the School of the Museum of Fine Arts in Boston, and received an MFA in sculpture from Columbia University in 1965. Jonas taught at MIT from 1998 to 2014, and is currently professor emerita in ACT within the School of Architecture and Planning.

The recipient of numerous honors and awards, Jonas represented the United States in the U.S. Pavilion at the 56th Venice Biennale in 2015 with an installation organized by the MIT List Visual Arts Center and commissioned by its director, Paul Ha.

“Contemporary art would not be where it is today without Joan Jonas’s trailblazing work in performance and video art,” says Ha. “The Biennale exhibition demonstrates that her extraordinary contribution to the field and her experimental approach to art making continues. We are thrilled to see Joan receive this singular recognition from the Kyoto Prize committee.”

The Biennale installation, entitled “They Come to Us Without a Word,” was praised as “a triumph” by Roberta Smith, art critic and writer for The New York Times.

“Performance art is a young person’s sport, most often pursued in heat, often accompanied by sensationalism and abandoned as stamina fades,” Smith wrote in 2015. “But, at 78, Joan Jonas has avoided all of the above, quietly but determinedly elaborating performance into an immersive multimedia art form that has sustained her for more than five decades.”

Jonas has had numerous significant solo exhibitions around the world, including a career retrospective currently on view in London at the Tate Modern through August 5. Other recent examples include the NTU Centre for Contemporary Art Singapore (CCA) (2016); Centre for Contemporary Art, Kitakyushu Project Gallery in Japan (2014); Kulturhuset Stadsteatern Stockholm (2013); Proyecto Paralelo in Mexico (2013); Contemporary Arts Museum in Houston (2013); Bergen Kunsthall in Norway (2011); and Museum of Modern Art in New York (2010). Jonas has been represented in dOCUMENTA in Kassel, Germany, six times since 1972, and has had major retrospectives at the Stedelijk Museum in Amsterdam, Galerie der Stadt Stuttgart in Germany, and the Queens Museum of Art in New York.

Jonas is one of three Kyoto laureates for 2018 in the fields at Arts and Philosophy, Advanced Technology, and Basic Sciences. The honoree for Advanced Technology is Karl Deisseroth, a professor at Stanford University, for his research in optogenetics and the development of causal systems neuroscience. In Basic Sciences, the foundation selected Masaki Kashiwara, a professor at Kyoto University, for his outstanding contributions to a broad spectrum of modern mathematics.

Jonas is the 13th individual from the MIT community, including alumni, to receive the Kyoto Prize. Including this year’s laureates, 108 individuals and one organization have received the honor.

The Boston Globe reports that Prof. Emerita Joan Jonas has been awarded the 2018 Kyoto Prize. The prize honors “important figures in the fields of advanced technology, basic sciences, and arts and philosophy.”