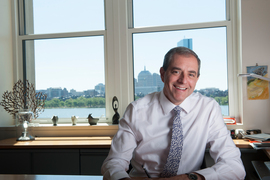 MIT economist David Autor has been named the recipient of the Heinz 25th Special Recognition Award, as part of the 25th anniversary of the Heinz Awards, in a distinction announced today.

The honor, granted by Teresa Heinz and the Heinz Family Foundation as part of its set of prominent annual awards, is for Autor’s research on labor, trade, and economic security, “and for transforming our understanding of how globalization and technological change are impacting jobs and earning prospects for American workers,” according to the foundation’s citation.

“I’m honored and flattered to be receiving this award,” Autor told MIT News. “It makes me feel my work has an impact in the policy space.”

Established in memory of U.S. Senator John Heinz (1938-1991), the Heinz Awards recognize contributors in the categories of Arts and Humanities; Environment; Human Condition; Public Policy; and Technology, the Economy and Employment. The foundation also bestows special awards, including the one given to Autor.

The Heinz Awards have recognized 151 individuals and granted more than $30 million to the recipients since 1995. Autor will receive an unrestricted cash award of $250,000.

“We honor David for developing methodologies of research that shed new light on the deep and lingering impacts of globalization and technological change on American workers and their communities,” Teresa Heinz, chair of the Heinz Family Foundation, said in a statement released today.

She added: “His findings lay bare the obstacles faced by so many who are seeking economic opportunity and better lives for their families, the need for policies that support these families, and the economic factors, such as educational status, that are contributing to wage inequality. David’s research should be a wake-up call for policy makers to address systemic shortcomings in labor standards and reduce the barriers that place both higher education and opportunities it creates to access good jobs out of reach for so many.”

The foundation also noted Autor’s work as co-chair of the MIT Task Force on the Work of the Future, an Institute-wide project examining technology, employment, and labor policy, and specifically cited some of his influential papers about work and social mobility. Autor’s 2020 paper “The Faltering Urban Opportunity Escalator,” the foundation stated, identifies and highlights “the elimination of middle-skill jobs such as clerical and administration positions in large urban areas,” and reveals it to have an especially large impact on people of color.

The foundation’s citation also notes that in his 2016 paper “The China Shock,” co-written with David Dorn and Gordon Hanson, Autor “upends prevailing economic wisdom that the U.S. job market is large enough and flexible enough to absorb and redirect workers displaced by manufacturing job loss.” The study found that Chinese imports were sufficient to replace about 1.53 million U.S. manufacturing jobs between 1990 and 2007, with area employment and wages remaining depressed in affected areas for a decade or more after those jobs were eliminated.

“Senator Heinz was very concerned with the state of working conditions, in Pennsylvania and beyond, especially due to globalization and how it was affecting the blue-collar work force,” says Autor, who is the Ford International Professor in the Department of Economics. “I’m heartened to know my research has helped advance understanding of these issues.”

When it comes to trade, Autor added, “There are real distributional consequences, and the benefits are quite dispersed, but the losses are quite concentrated. Policy needs to wake up to that and stand up to that. It doesn’t mean we shouldn’t be trading, but we should be preparing for the consequences.”

Other MIT faculty who have received a Heinz Award in the last two decades include biomedical engineer Sangeeta Bhatia, in 2015; biomechatronic engineer Hugh Herr, in 2007; physicist Mildred “Millie” Dresselhaus, in 2005; and biomedical engineer Robert Langer, in 2003.