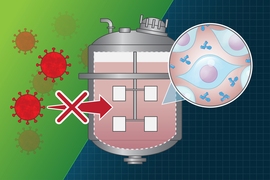 ↓ Download Image
Caption: A new study from an MIT-led consortium, which analyzed 18 incidents of viral contamination at biopharmaceutical manufacturing plants, offers insight into the most common sources of viral contamination, and makes several recommendations to help companies avoid such incidents in the future.
Credits: Image: Betsy Skrip, MIT Center for Biomedical Innovation

Caption:
A new study from an MIT-led consortium, which analyzed 18 incidents of viral contamination at biopharmaceutical manufacturing plants, offers insight into the most common sources of viral contamination, and makes several recommendations to help companies avoid such incidents in the future.
Credits:
Image: Betsy Skrip, MIT Center for Biomedical Innovation

Over the past few decades, there have been a handful of incidents in which manufacturing processes for making protein drugs became contaminated with viruses at manufacturing plants. These were all discovered before the drugs reached patients, but many of the incidents led to costly cleanups and in one instance a drug shortage.

A new study from an MIT-led consortium has analyzed 18 of these incidents, most of which had not been publicly reported until now. The report offers insight into the most common sources of viral contamination and makes several recommendations to help companies avoid such incidents in the future.

While the study focused on biopharmaceuticals (protein drugs produced by living cells), the findings could also help biotech companies to create safety guidelines for the manufacture of new gene therapies and cell-based therapies, many of which are now in development and could face similar contamination risks.

“As the biotech industry starts to think about manufacturing these really exciting new products, which are highly effective and even in some cases curative, we want to make sure that the viral safety aspects of manufacturing them are considered,” says Stacy Springs, senior director of programs for MIT’s Center for Biomedical Innovation (CBI).

Springs is the senior author of the study, which appears today in Nature Biotechnology. Paul Barone, director of the Consortium on Adventitious Agent Contamination in Biomanufacturing (CAACB), is the lead author. The other authors from CBI are Jackie Wolfrum, who with Barone is co-director of CBI’s Biomanufacturing Program, as well as Michael Wiebe and James Leung, who worked on the study with industry experts from the CAACB.

Many therapeutic proteins are produced using recombinant DNA technology, which allows bacterial, yeast, or mammalian cells to be engineered to produce a desired protein. While this practice has a strong safety record, there is a risk that the cultured mammalian cells can be infected with viruses. The CAACB, which performed the study, was launched in 2010 following a well-publicized contamination incident at a Genzyme manufacturing plant in Boston. The plant had to shut down for about 10 months when some of its production processes became infected with a virus in 2009.

When such incidents occur, drug companies aren’t required to make them public unless the incident affects their ability to provide the drug. The CBI team assembled a group of 20 companies that were willing to share information on such incidents, on the condition that the data would be released anonymously.

“We thought it would be very valuable to have industry share their experience of viral contamination, since most companies have had none of these incidents if they’re lucky, or maybe one or two at the most,” Springs says. “All of that knowledge about how they discovered and managed the event, identified the virus and its source, disinfected and restarted the production facility, and took action to prevent a recurrence was all siloed within individual companies.”

The study, which focused on protein drugs produced by mammalian cells, revealed 18 viral contamination incidents since 1985. These occurred at nine of the 20 biopharmaceutical companies that reported data. In 12 of the incidents, the infected cells were Chinese hamster ovary (CHO) cells, which are commonly used to produce protein drugs. The other incidents involved human or nonhuman primate cells.

The viruses that were found in the human and nonhuman primate cells included herpesvirus; human adenovirus, which causes the common cold; and reovirus, which can cause mild gastroenteritis. These viruses may have spread from workers at the plants, the researchers suggest.

In many cases, contamination incidents were first detected because cells were dying or didn’t look healthy. In two cases, the cells looked normal but the viral contamination was detected by required safety testing. The most commonly used test takes at least two weeks to yield results, so the contaminating virus can spread further through the manufacturing process before it is detected.

Some companies also use a faster test based on polymerase chain reaction (PCR) technology, but this test has to be customized to look for specific DNA sequences, so it works best when the manufacturers know of specific viruses that are most likely to be found in their manufacturing processes.

“This work demonstrates how sharing of data and information yield better understanding of difficult problems in manufacturing biologics,” says Janet Woodcock, director of the Center for Drug Evaluation and Research at the FDA, who was not involved in the study. “Innovators contemplating new processes or product may be able to avoid pitfalls or disasters by learning from the collective past experiences documented here.”

Many of the CAACB member companies are exploring new technologies to inactivate or remove viruses from cell culture media before use, and from products during purification. Additionally, companies are developing rapid virus detection systems that are both sensitive and able to detect a broad spectrum of viruses.

CBI researchers are also working on several technologies that could enable more rapid tests for viral contamination. Much of this research is taking place within a new interdisciplinary research group at the Singapore-MIT Alliance for Science and Technology (SMART), called the Critical Analytics for Manufacturing Personalized Medicines. Led by Krystyn Van Vliet, MIT associate provost and a professor of biological engineering and materials science and engineering, this group, which includes several other MIT faculty members from across departments, is working on about half a dozen technologies to more rapidly detect viruses and other microbes.

“I think that there’s a lot of potential for technology development to ameliorate some of the challenges we see,” Barone says.

Another strategy that the report recommends, and that some companies are already using, is to reduce or eliminate the use of cell growth medium components that are derived from animal products such as bovine serum. When that isn’t possible, another strategy is to perform virus removal or inactivation processes on media before use, which can prevent viruses from entering and contaminating manufacturing processes. Some companies are using a pasteurization-like process called high temperature short time (HTST) treatment, while others use ultraviolet light or nanofiltration.

The researchers hope that their study will also help guide manufacturers of new gene- and cell-therapy products. These therapies, which make use of genes or cells to either replace defective cells or produce a therapeutic molecule within the body, could face similar safety challenges as biopharmaceuticals, the researchers say, as they are often grown in media containing bovine serum or human serum.

“Having done this sharing of information in a systematic way, I think we can accelerate the dissemination of information on best practices, not only within the protein manufacturing industry but also the new industry of cell-based modalities,” says James Leung.

The research was funded by the members of the CAACB.

A new way to manufacture small batches of biopharmaceuticals on demand