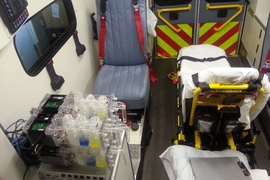 Caption:
A new, portable production system is designed to manufacture a range of biopharmaceuticals on demand. The principal component of the microbioreactor is a plastic chip with microfluidic circuits (green), optical sensors (red and blue circles) for monitoring oxygen and acidity, and a filter to retain the cells while the therapeutic protein is extracted (white circle).

For medics on the battlefield and doctors in remote or developing parts of the world, getting rapid access to the drugs needed to treat patients can be challenging.

Biopharmaceutical drugs, which are used in a wide range of therapies including vaccines and treatments for diabetes and cancer, are typically produced in large, centralized fermentation plants. This means they must be transported to the treatment site, which can be expensive, time-consuming, and challenging to execute in areas with poor supply chains.

Now a portable production system, designed to manufacture a range of biopharmaceuticals on demand, has been developed by researchers at MIT, with funding from the Defense Advanced Research Projects Agency (DARPA).

In a paper published today in the journal Nature Communications, the researchers demonstrate that the system can be used to produce a single dose of treatment from a compact device containing a small droplet of cells in a liquid.

In this way, the system could ultimately be carried onto the battlefield and used to produce treatments at the point of care. It could also be used to manufacture a vaccine to prevent a disease outbreak in a remote village, according to senior author Tim Lu, an associate professor of biological engineering and electrical engineering and computer science, and head of the Synthetic Biology Group at MIT’s Research Laboratory of Electronics.

“Imagine you were on Mars or in a remote desert, without access to a full formulary, you could program the yeast to produce drugs on demand locally,” Lu says.

The system is based on a programmable strain of yeast, Pichia pastoris, which can be induced to express one of two therapeutic proteins when exposed to a particular chemical trigger. The researchers chose P. pastoris because it can grow to very high densities on simple and inexpensive carbon sources, and is able to express large amounts of protein.

“We altered the yeast so it could be more easily genetically modified, and could include more than one therapeutic in its repertoire,” Lu says.

When the researchers exposed the modified yeast to estrogen β-estradiol, the cells expressed recombinant human growth hormone (rHGH). In contrast, when they exposed the cells to methanol, the yeast expressed the protein interferon.

The cells are held within a millimeter-scale table-top microbioreactor, containing a microfluidic chip, which was originally developed by Rajeev Ram, a professor of electrical engineering at MIT, and his team, and then commercialized by Kevin Lee — an MIT graduate and co-author — through a spin-off company.

A liquid containing the desired chemical trigger is first fed into the reactor, to mix with the cells.

Inside the reactor, the cell-and-chemical mixture is surrounded on three sides by polycarbonate; on the fourth side is a flexible and gas-permeable silicone rubber membrane.

By pressurizing the gas above this membrane, the researchers are able to gently massage the liquid droplet to ensure its contents are fully mixed together.

“This makes sure that the one milliliter (of liquid) is homogenous, and that is important because diffusion at these small scales, where there is no turbulence, takes a surprisingly long time,” says Ram, who was also a senior author of the paper.

Because the membrane is gas permeable, it allows oxygen to flow through to the cells, while any carbon dioxide they produce can be easily extracted.

The device continuously monitors conditions within the microfluidic chip, including oxygen levels, temperature, and pH, to ensure the optimum environment for cell growth. It also monitors cell density.

If the yeast is required to produce a different protein, the liquid is simply flushed through a filter, leaving the cells behind. Fresh liquid containing a new chemical trigger can then be added, to stimulate production of the next protein.

Although other research teams have previously attempted to build microbioreactors, these have not have not had the ability to retain the protein-producing cells while flushing out the liquid they are mixed with, Ram says. “You want to keep the cells because they are your factory,” he says. “But you also want to rapidly change their chemical environment, in order to change the trigger for protein production.”

The researchers have demonstrated a very logical and practical way to produce biologic drugs, according to Luke P. Lee, a professor of bioengineering at the University of California at  Berkeley, who was not involved in the research. Their smart biologics production technique uses one of the best integrated microfluidics systems, Lee says.

“It is a pragmatic solution for biomanufacturing, and the team's flexible and portable platform shows an authentic way of producing personalized therapeutics,” he says.

The researchers are now investigating the use of the system in combinatorial treatments, in which multiple therapeutics, such as antibodies, are used together.

Combining multiple therapeutics in this way can be expensive if each requires its own production line, Lu says.

“But if you could engineer a single strain, or maybe even a consortia of strains that grow together, to manufacture combinations of biologics or antibodies, that could be a very powerful way of producing these drugs at a reasonable cost,” he says.

MIT researchers have developed a portable system that could produce biotech drugs on demand, reports Lisa Rapaport for Reuters. “The table-top machine has the potential to one day produce proteins to treat any number of a wide range of conditions like cancer, diabetes, heart attacks, and hemophilia,” writes Rapaport.

A portable device developed by MIT researchers uses programmable yeast to create drugs on demand, reports Jamie Ducharme for Boston Magazine. The device “could be a lifesaver for doctors working in vulnerable conditions, such as the battlefield, a remote village, or even an ambulance,” writes Ducharme.

Boston Herald reporter Lindsay Kalter writes that MIT researchers have developed a portable pharmacy that can manufacture biopharmaceuticals and modify treatments. “Instead of relying on a cocktail that already exists, you can reprogram the reactor on demand to customize the treatment,” says Prof. Timothy Lu.

Popular Science reporter Samantha Cole writes that MIT researchers have developed a laptop-sized, portable device that can produce biopharmaceuticals for doctors in remote locations. Cole explains that the device can “produce a single dose of treatment with a series of steps, using genetically engineered yeast cells as a mini 'factory' for a variety of customizable drugs.”