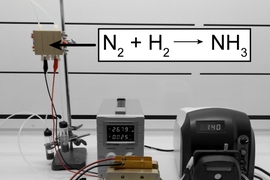 ↓ Download Image
Caption: A photograph depicting a model of an electrochemical Haber-Bosch reactor coupled to a water electrolyzer, with the reactors highlighted.
Credits: Courtesy of the researchers

Caption:
In a step toward small-scale production of ammonia fertilizer, MIT chemical engineers have devised a way to combine hydrogen and nitrogen using an electric current that generates a lithium catalyst.
Credits:
Image: Stock photo

Caption:
A photograph depicting a model of an electrochemical Haber-Bosch reactor coupled to a water electrolyzer, with the reactors highlighted.
Credits:
Courtesy of the researchers

Most of the world’s fertilizer is produced in large manufacturing plants, which require huge amounts of energy to generate the high temperatures and pressures needed to combine nitrogen and hydrogen into ammonia.

MIT chemical engineers are working to develop a smaller-scale alternative, which they envision could be used to locally produce fertilizer for farmers in remote, rural areas, such as sub-Saharan Africa. Fertilizer is often hard to obtain in such areas because of the cost of transporting it from large manufacturing facilities.

In a step toward that kind of small-scale production, the research team has devised a way to combine hydrogen and nitrogen using electric current to generate a lithium catalyst, where the reaction takes place.

“In the future, if we envision how we want this to be used someday, we want a device that can breathe in air, take in water, have a solar panel hooked up to it, and be able to produce ammonia. This could be used by a farmer or a small community of farmers,” says Karthish Manthiram, an assistant professor of chemical engineering at MIT and the senior author of the study.

Graduate student Nikifar Lazouski is the lead author of the paper, which appears today in Nature Catalysis. Other authors include graduate students Minju Chung and Kindle Williams, and undergraduate Michal Gala.

For more than 100 years, fertilizer has been manufactured using the Haber-Bosch process, which combines atmospheric nitrogen with hydrogen gas to form ammonia. The hydrogen gas used for this process is usually obtained from methane derived from natural gas or other fossil fuels. Nitrogen is very unreactive, so high temperatures (500 degrees Celsius) and pressures (200 atmospheres) are required to make it react with hydrogen to form ammonia.

Using this process, manufacturing plants can produce thousands of tons of ammonia per day, but they are expensive to run and they emit a great deal of carbon dioxide. Among all chemicals produced in large volume, ammonia is the largest contributor to greenhouse gas emissions.

The MIT team set out to develop an alternative manufacturing method that could reduce those emissions, with the added benefit of decentralized production. In many parts of the world, there is little infrastructure for distributing fertilizer, making it expensive to obtain fertilizer in those regions.

“The ideal characteristic of a next-generation method of making ammonia would be that it’s distributed. In other words, you could make that ammonia close to where you need it,” Manthiram says. “And ideally, it would also eliminate the CO2 footprint that otherwise exists.”

While the Haber-Bosch process uses extreme heat and pressure to force nitrogen and hydrogen to react, the MIT team decided to try using electricity to achieve the same effect. Previous research has shown that applying electrical voltage can shift the equilibrium of the reaction so that it favors the formation of ammonia. However, it has been difficult to do this in an inexpensive and sustainable way, the researchers say.

Most previous efforts to perform this reaction under normal temperatures and pressures have used a lithium catalyst to break the strong triple bond found in nitrogen gas molecules. The resulting product, lithium nitride, can then react with hydrogen atoms from an organic solvent to produce ammonia. However, the solvent typically used, tetrahydrofuran, or THF, is expensive and is consumed by the reaction, so it needs to be continually replaced.

The MIT team came up with a way to use hydrogen gas instead of THF as the source of hydrogen atoms. They designed a mesh-like electrode that allows nitrogen gas to diffuse through it and interact with hydrogen, which is dissolved in ethanol, at the electrode surface.

This stainless steel, mesh structure is coated with the lithium catalyst, produced by plating out lithium ions from solution. Nitrogen gas diffuses throughout the mesh and is converted to ammonia through a series of reaction steps mediated by lithium. This setup allows hydrogen and nitrogen to react at relatively high rates, despite the fact that they are usually not very soluble in any liquids, which makes it more challenging to react them at high rates.

“This stainless steel cloth is a way of very effectively contacting nitrogen gas with our catalyst, while also having the electrical and ionic connections that are needed,” Lazouski says.

In most of their ammonia-producing experiments, the researchers used nitrogen and hydrogen gases flowing in from a gas cylinder. However, they also showed that they could use water as a source of hydrogen, by first electrolyzing the water and then flowing that hydrogen into their electrochemical reactor.

The overall system is small enough to sit on a lab benchtop, but it could be scaled up to produce larger quantities of ammonia by connecting many modules together, Lazouski says. Another key challenge will be to improve the energy efficiency of the reaction, which now is only about 2 percent, compared to 50 to 80 percent for the Haber-Bosch reaction.

“We have an overall reaction that finally looks favorable, which is a big step forward,” he says. “But we know that there’s still an energy loss problem that needs to be solved. That will be one of the major things that we want to address in future work that we’ll undertake.”

In addition to serving as a production method for small batches of fertilizer, this approach could also lend itself to energy storage, Manthiram says. This idea, which is now being pursued by some scientists, calls for using electricity produced by wind or solar energy to power ammonia generation. The ammonia could then serve as a liquid fuel that would be relatively easy to store and transport.

“Ammonia is such a critical molecule that can wear many different hats, and this same method of ammonia production could be used in very diverse applications,” Manthiram says.

The research was funded by the National Science Foundation and the MIT Energy Initiative Seed Fund. Prior research which was foundational for the present work was supported by MIT’s Abdul Latif Jameel Water and Food Systems Lab (J-WAFS).

Decarbonizing the making of consumer products

Shrinking the carbon footprint of a chemical in everyday objects