Bhavik Nagda: Delving into the deployment of new technologies 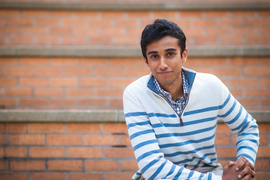 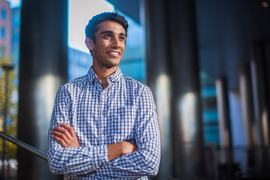 ↓ Download Image
Caption: In the future, Nagda hopes to return to D.C. and leverage his technical background. He views the area as similar to MIT - a place where ideas flow and can have wide-scale impact. His experience also showed him the greater need for engineers on Capitol Hill.
Credits: Photo: Gretchen Ertl

Caption:
As a senior majoring in computer science, Bhavik Nagda had always been fascinated by futuristic technologies, such as robots and space exploration rovers. But what led impossible sounding ideas to become real products? Nagda sought to find out by attending MIT’s Science Policy Bootcamp.
Credits:
Photo: Gretchen Ertl

Caption:
In the future, Nagda hopes to return to D.C. and leverage his technical background. He views the area as similar to MIT - a place where ideas flow and can have wide-scale impact. His experience also showed him the greater need for engineers on Capitol Hill.
Credits:
Photo: Gretchen Ertl

“Academia,” “government,” “industry” — Bhavik Nagda squinted closely as his professor pointed to each word on the diagram of the American economy’s core components. Between each word sprouted dozens of arrows, illustrating the complex interactions between the three institutions.

“There were just so many arrows,” says Nagda, recalling the presentation during MIT’s Science Policy Bootcamp. “I was blown away. It gave a voice to the way I think about systemic issues and how America has built its economy.”

A senior majoring in computer science, Nagda had always been fascinated by futuristic technologies. Upon coming to MIT he quickly took on research roles in everything from artificial intelligence to computational cognitive science. But he found himself coming back to a key question: What led impossible-sounding ideas to become real products?

The pieces finally connected when he attended the bootcamp, taught by Bill Bonvillian, the former director of the MIT Washington Office, during the Institute’s Independent Activities Period (IAP) in January. Nagda had already observed the importance of cooperation between innovators and policymakers during several internships, in roles as an engineer and a technology investor. The bootcamp crystallized his understanding of how critical this cooperation is to the U.S. economy — and he began to envision a future for himself working at the intersection of technology, innovation, and policy.

A key concept from the course, explains Nagda, was the “valley of death,” which describes the difficulty a research idea often faces in receiving enough funding to continue with development. He learned how programs such as the Defense Advanced Research Projects Agency, which helped launch major inventions such as GPS and the internet, are crucial drivers for the economy.

Nagda agreed — he had seen firsthand how few ideas make it past this valley and reach commercialization. For the past few months, he had been working at Bessemer Venture Partners. The firm is famous for its cloud investments, such as Pinterest, Twilio, and Twitch. Nagda worked as a technology investor to find and recommend emerging companies.

The experience showed him that while the venture community funds a variety of ideas, scalable “software-as-a-service” (SAAS) products and biotech products have remained the most lucrative for the last decade. He became fascinated with ways governments can use their expansive resources to support early-stage research in fields like clean energy and precision medicine.

But in addition to funding new ideas, governments must also anticipate the pitfalls of technology and create policies to protect the public, says Nagda. He witnessed collaborations between politicians and innovators during an earlier sophomore-year internship, working as a software engineer at Cruise Automation, a company that has been introducing self-driving cars into cities that can be hailed via phone app.

Prior to the company’s launch, many policymakers were worried about public safety. A single flaw in a vehicle’s design could lead to severe danger for both passengers and pedestrians, a prospect the engineers took very seriously.

For example, “One of the challenges is making an accurate sensor,” says Nagda. “The lidar and stereo camera imagery and inertial measurements must help the computer estimate the location and speed of the vehicle. It’s very challenging.” As an intern, he noted with interest how Cruise’s engineers worked with policymakers to ensure the technology would meet predetermined safety conditions.

He also witnessed the company develop coalitions across San Francisco. Employees from the government and community relations teams spoke with community members of all backgrounds, from biking commuters to homeless people. The goal was to interpret the concerns of everyday people about autonomous vehicles and consider their thoughts into the car’s design.
This focus on societal impact by tech companies has grown due to the recent national scrutiny of industry leaders, such as Amazon, Apple, Google, and Facebook. “The congressional hearings have shown us there’s a lot of work Silicon Valley has to do. There’s now a focus for tech companies to think about their stakeholders as opposed to just directly maximizing share value,” he says.

Nagda’s interests in technology and government were also fueled by a summer he spent working for the Federal Communications Commission (FCC), with support from MIT’s PKG Center. He helped to research robotic telemarketing, or “robocalling.”

“When robocalling was first invented, it was very exciting to people. But in the last decade, we’ve started to get around three to four calls a day,” says Nagda. “There are so many innocent people who get hacked into revealing their bank numbers.”

Nagda’s team focused on helping to authenticate callers who had been incorrectly blocked and labeled as robocallers. Their response code helped to recognize this error and provide users a message to automatically reverse the mistake. The work was presented to the Internet Engineering Task Force.

After meeting policymakers in person, Nagda was surprised to see a level of government cooperation rarely portrayed in the media. “It was amazing to see delegates from both sides of the aisle work together on this issue.”

During his time at MIT, Nagda has also conducted research in the labs of Professor Tomas Lozano-Perez of the Computer Science and Artificial Intelligence Laboratory and as a research assistant for economics Professor Jonathan Gruber. Since last year, he has worked in the lab of brain and cognitive sciences Professor Joshua Tenenbaum, through the SuperUROP program; his research has included work on an artificial intelligence system that can “learn” to play Atari video games.

He also taught an engineering bootcamp in Soroti, Uganda for students ages 12-19 during IAP this past year through MIT’s D-Lab Development program. And, he has participated in the MIT Driverless Team, which builds cars and races them in international competitions.

In the future, Nagda hopes to return to Washington and leverage his technical background. He views the area as similar to MIT — a place where ideas flow and can have wide-scale impact. His experience also showed him the greater need for engineers on Capitol Hill.

“For the last decade, it’s been clear that technology is impacting society in often detrimental ways. It’s a front and center issue in politics right now. I think to push the needle forward, we need more technologists in the room while policies are formulated.”

In terms of whether he plans to be involved in research, policy, or business, Nagda is still unsure. “I don’t know where I’ll be, but I know I’ll be thinking about these three issues for the rest of my life.”

Racing into the future of autonomous driving