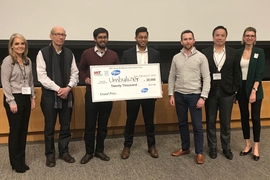 If someone begins struggling to breathe on their own, machine ventilators are the best way to keep them alive. Unfortunately, the high price of the machines forces many hospitals in the poorest regions of the world to rely on a simple solution known as an Ambu Bag that requires hospital staff or even a patient’s own family member to apply constant manual pressure in order to get oxygen to the lungs.

Ambu Bags are imprecise and carry their own risks, which helps explain why respiratory disease is one of the leading causes of death in more than 60 developing countries worldwide.

On Feb. 21, the student team Umbulizer won $20,000 to help address that problem with a device it claims can help 90 percent of patients struggling to breathe, at a fraction of the cost of traditional ventilators. The money was part of the company’s first-place finish in the annual MIT Sloan Healthcare Innovations Prize competition.

The event, which is open to entrepreneurial students from Boston-area colleges and universities, featured eight finalist teams pitching their health care innovations to a group of judges and a packed audience at MIT Sloan’s Wong Auditorium.

The company’s device looks more like a desktop printer than a traditional bedside ventilator and is capable of running on batteries for added mobility. After an operator connects the device’s single tube to a patient, it rhythmically pumps a safe amount of air into their lungs.

Umbulizer’s device will cost around $2,000 compared to the $15,000 price tag of regular ventilators. The key to the student team’s cost savings is its decision to focus on providing the four most common functions of ventilators with their device. Machine ventilators are typically designed to perform 15 different functions, many of which are rarely needed to save a life, Piracha told the audience.

The team is currently focused on bringing its solution to Pakistan, a country with over 200 million people that Piracha says has less than 2,000 machine ventilators across all of its hospitals. The company says early results from a clinical trial there are promising.

“When we spoke to Pakistani doctors and hospital administrators, they expressed a need for a device that is simple to operate, capable of remote monitoring, portable, and built using locally sourced material. All of those considerations have informed our [first iteration of this machine],” Piracha told the audience. “Our device’s competitive advantage lies in the fact that we’ve balanced the accuracy and consistency of a traditional ventilator with the portability and affordability of an Ambu Bag.”

Piracha says the prize money will be put toward Umbulizer’s current clinical trial. If the company can find success selling to hospitals in Pakistan, it sees a market in countries across South Asia, Africa, and South America, regions where there are a combined 2 million preventable deaths from respiratory diseases each year.

The competition’s $4,000 second-place prize went to OcculAR, which has built a virtual reality headset capable of conducting remote eye exams on patients and sending 3-D video summaries of the exams to doctors for analysis.

“Worldwide, there are 276 million cases of blindness or severe vision loss, and fortunately 223 million of those cases are preventable or treatable. The problem is that, in order to prevent or treat [the problem], you first have to diagnose it,” OcculAR team member Brett Sternfield, an MBA candidate at Sloan, told the audience. “Today, ophthalmologists use a slit lamp. It’s a bulky machine, where the patient and the doctor have to be co-located in the same room, and it really limits the ability to get this technology outside of the clinic and into the rest of the world.”

The company’s prototype uses proprietary illumination and imaging software to offer the same functionality of a traditional slit lamp, with no moving parts. The data it gathers could also be used for future artificial intelligence-driven diagnostics.

The OcculAR team has begun securing strategic partnerships and is working to begin validation trials in the Boston area.

The $1,000 audience choice award went to Precavida, a digital platform that arranges appointments for uninsured patients with health care providers in Brazil. The company has been building its solution over the last five years and now works with over 100,000 patients and 175 health care providers, facilitating around 34,000 appointments each year.

The company is trying to fix some major shortcomings in the current system: Only about 25 percent of Brazilians have health insurance, and people wait an average of six months to see a specialist. Precavida, which charges patients for every appointment scheduled, can get patients in front of specialists in the same week or day, and charges rates 45 percent lower than the current private health system, according to team member and MIT Sloan Fellows MBA candidate Lais Fonseca Alves.

“Our goal is to become a one-stop shop platform for health care services,” Alves said.

The conference brings together members of the local health care ecosystem including academics, investors, government officials, and leaders in the private sector to discuss some of the most pressing issues and promising developments in the health care sector. This year’s theme explored the impact of digitalization on the industry.

A little over 40 teams applied to this year’s competition, but only eight teams earned the right to pitch in the finals. Each team had five minutes to give their presentations, which were judged based on five categories including the solution’s impact, novelty, market opportunity, feasibility, and traction.

The competition marked the end of a full week of support for finalists, which included networking opportunities, office hours with local venture capitalists, and workshops on skills such as delivering a successful pitch.

“A lot of the applicants are early stage, so they may have a great idea, but maybe their business model isn’t fully worked out, or they would like more practice in delivering a successful pitch to a diverse audience,” said Jasmine Kang, an organizer of the competition and a Sloan MBA candidate.

Other finalists of the competition included i^4, which has developed an incubator for infants that tracks four different vital signs to help prevent deaths from infection and hypothermia; Memoir Health, which provides recovering drug addicts with behavioral and mental health care both virtually and in-person; VASERA Male Contraceptives, which is developing a long-lasting, reversible male contraceptive; ATEM, which has developed a stylish, “smart” asthma inhaler that notifies users when they forget it and tracks usage; and 02 Therapies, which is developing a technology to map oxygen levels in tumors to enable personalized and optimized cancer therapies.