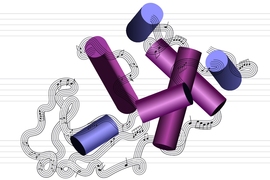 ↓ Download Image
Caption: Artist’s impression depicts the conversion of the structure of a protein molecule into a musical passage, as is done in the MIT researchers’ system.
Credits: Image: Christine Daniloff, MIT 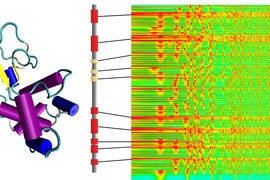 ↓ Download Image
Caption: Diagram depicts the translation between music and protein structure devised by MIT researchers. The vertical shape at center shows the sequence of amino acids in the protein, depicted as different colored bars. To the left, the shape that this sequence of amino acids folds into, forming a functional protein. To the right, the spectrum of sounds represented by each of those amino acids.
Credits: Image: courtesy of the researchers

Caption:
Artist’s impression depicts the conversion of the structure of a protein molecule into a musical passage, as is done in the MIT researchers’ system.
Credits:
Image: Christine Daniloff, MIT

Caption:
Molecular diagram depicts the structure of lysozyme, one of the proteins used in the MIT team’s system for converting protein structure into music.
Credits:
Image: courtesy of the researchers

Caption:
Diagram depicts the translation between music and protein structure devised by MIT researchers. The vertical shape at center shows the sequence of amino acids in the protein, depicted as different colored bars. To the left, the shape that this sequence of amino acids folds into, forming a functional protein. To the right, the spectrum of sounds represented by each of those amino acids.
Credits:
Image: courtesy of the researchers

Want to create a brand new type of protein that might have useful properties? No problem. Just hum a few bars.

In a surprising marriage of science and art, researchers at MIT have developed a system for converting the molecular structures of proteins, the basic building blocks of all living beings, into audible sound that resembles musical passages. Then, reversing the process, they can introduce some variations into the music and convert it back into new proteins never before seen in nature.

Although it’s not quite as simple as humming a new protein into existence, the new system comes close. It provides a systematic way of translating a protein’s sequence of amino acids into a musical sequence, using the physical properties of the molecules to determine the sounds. Although the sounds are transposed in order to bring them within the audible range for humans, the tones and their relationships are based on the actual vibrational frequencies of each amino acid molecule itself, computed using theories from quantum chemistry.

The system was developed by Markus Buehler, the McAfee Professor of Engineering and head of the Department of Civil and Environmental Engineering at MIT, along with postdoc Chi Hua Yu and two others. As described today in the journal ACS Nano, the system translates the 20 types of amino acids, the building blocks that join together in chains to form all proteins, into a 20-tone scale. Any protein’s long sequence of amino acids then becomes a sequence of notes.

While such a scale sounds unfamiliar to people accustomed to Western musical traditions, listeners can readily recognize the relationships and differences after familiarizing themselves with the sounds. Buehler says that after listening to the resulting melodies, he is now able to distinguish certain amino acid sequences that correspond to proteins with specific structural functions. “That’s a beta sheet,” he might say, or “that’s an alpha helix.”

Learning the language of proteins

The whole concept, Buehler explains, is to get a better handle on understanding proteins and their vast array of variations. Proteins make up the structural material of skin, bone, and muscle, but are also enzymes, signaling chemicals, molecular switches, and a host of other functional materials that make up the machinery of all living things. But their structures, including the way they fold themselves into the shapes that often determine their functions, are exceedingly complicated. “They have their own language, and we don’t know how it works,” he says. “We don’t know what makes a silk protein a silk protein or what patterns reflect the functions found in an enzyme. We don’t know the code.”

By translating that language into a different form that humans are particularly well-attuned to, and that allows different aspects of the information to be encoded in different dimensions — pitch, volume, and duration — Buehler and his team hope to glean new insights into the relationships and differences between different families of proteins and their variations, and use this as a way of exploring the many possible tweaks and modifications of their structure and function. As with music, the structure of proteins is hierarchical, with different levels of structure at different scales of length or time.

The new method translates an amino acid sequence of proteins into this sequence of percussive and rhythmic sounds. Courtesy of Markus Buehler.

The team then used an artificial intelligence system to study the catalog of melodies produced by a wide variety of different proteins. They had the AI system introduce slight changes in the musical sequence or create completely new sequences, and then translated the sounds back into proteins that correspond to the modified or newly designed versions. With this process they were able to create variations of existing proteins — for example of one found in spider silk, one of nature’s strongest materials — thus making new proteins unlike any produced by evolution.

Although the researchers themselves may not know the underlying rules, “the AI has learned the language of how proteins are designed,” and it can encode it to create variations of existing versions, or completely new protein designs, Buehler says. Given that there are “trillions and trillions” of potential combinations, he says, when it comes to creating new proteins “you wouldn’t be able to do it from scratch, but that’s what the AI can do.”

By using such a system, he says training the AI system with a set of data for a particular class of proteins might take a few days, but it can then produce a design for a new variant within microseconds. “No other method comes close,” he says. “The shortcoming is the model doesn’t tell us what’s really going on inside. We just know it works.”

This way of encoding structure into music does reflect a deeper reality. “When you look at a molecule in a textbook, it’s static,” Buehler says. “But it’s not static at all. It’s moving and vibrating. Every bit of matter is a set of vibrations. And we can use this concept as a way of describing matter.”

The method does not yet allow for any kind of directed modifications — any changes in properties such as mechanical strength, elasticity, or chemical reactivity will be essentially random. “You still need to do the experiment,” he says. When a new protein variant is produced, “there’s no way to predict what it will do.”

The team also created musical compositions developed from the sounds of amino acids, which define this new 20-tone musical scale. The art pieces they constructed consist entirely of the sounds generated from amino acids. “There are no synthetic or natural instruments used, showing how this new source of sounds can be utilized as a creative platform,” Buehler says. Musical motifs derived from both naturally existing proteins and AI-generated proteins are used throughout the examples, and all the sounds, including some that resemble bass or snare drums, are also generated from the sounds of amino acids.

“Markus Buehler has been gifted with a most creative soul, and his explorations into the inner workings of biomolecules are advancing our understanding of the mechanical response of biological materials in a most significant manner,” says Marc Meyers, a professor of materials science at the University of California at San Diego, who was not involved in this work.

Meyers adds, “The focusing of this imagination to music is a novel and intriguing direction. This is experimental music at its best. The rhythms of life, including the pulsations of our heart, were the initial sources of repetitive sounds that engendered the marvelous world of music. Markus has descended into the nanospace to extract the rythms of the amino acids, the building blocks of life.”

“Protein sequences are complex, as are comparisons between protein sequences,” says Anthony Weiss, a professor of biochemistry and molecular biotechnology at the University of Sydney, Australia, who also was not connected to this work. The MIT team “provides an impressive, entertaining and unusual approach to accessing and interpreting this complexity. ... The approach benefits from our innate ability to hear complex musical patterns. Through harmony and discord, we now have an entertaining and useful tool to compare and contrast amino acid sequences.”

The team also included research scientist Zhao Qin and Francisco Martin-Martinez at MIT. The work was supported by the U.S. Office of Naval Research and the National Institutes of Health.

Scientific American Ron Cowen explores Prof. Markus Buehler’s work generating music that represents the vibrations and folding patterns of amino acids. “Just like in a painting, the new protein sounds are like a new color palette that could be invented—colors no one has ever seen—but which can now be used to create art,” Buehler says.

Prof. Markus Buehler speaks with Ira Flatow of Science Friday about his research, which attempts to better understand and create new proteins by translating them into music. Buehler explains that they were able to listen to proteins after discovering that “amino acids have a unique frequency spectrum which we could then make audible using a concept of transposition.”

MIT researchers have created an app that translates proteins into music, reports Eva Amsen of Forbes. This method could potentially be used to “make it easier to process very subtle changes that would be less obvious if you looked at the data visually,” Amsen explains.

Diana Cai writes for STAT about Prof. Markus Buehler’s new research to turn amino acids into music. “Buehler thinks the technology could help in understanding genetic diseases caused by misfolded proteins,” writes Cai, noting that, “AI may conceivably ‘hear’ patterns of misfolding that could distinguish dangerous mutations from harmless ones.”

In a new study, Prof. Markus Buehler converted 20 types of amino acids into a 20-tone scale to create musical compositions. “Those altered compositions were converted back into a conceptual amino acid chain, which enabled the team to generate variations of proteins that have never been seen in nature,” writes Becky Ferreira for Motherboard.

Smoothing out the wrinkles in graphene

Spider silk could be used as robotic muscle