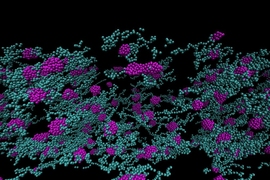 ↓ Download Image
Caption: This diagram of the molecular structure of one of the artificially produced versions of spider silk depicts one that turned out to form strong, well-linked fibers. A different structure, made using a variation of the same methods, was not able to form into the long fibers needed to make it useful. Musical compositions based on the two structures helped to show how they differed.
Credits: Image: Markus Buehler 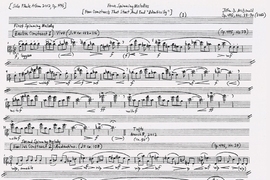 Caption:
This diagram of the molecular structure of one of the artificially produced versions of spider silk depicts one that turned out to form strong, well-linked fibers. A different structure, made using a variation of the same methods, was not able to form into the long fibers needed to make it useful. Musical compositions based on the two structures helped to show how they differed.
Credits:
Image: Markus Buehler

Now Buehler — together with David Kaplan of Tufts University and Joyce Wong of Boston University — has synthesized new variants on silk’s natural structure, and found a method for making further improvements in the synthetic material.

And an ear for music, it turns out, might be a key to making those structural improvements.

The work stems from a collaboration of civil and environmental engineers, mathematicians, biomedical engineers and musical composers. The results are reported in a paper published in the journal Nano Today.

“We’re trying to approach making materials in a different way,” Buehler explains, “starting from the building blocks” — in this case, the protein molecules that form the structure of silk. “It’s very hard to do this; proteins are very complex.”

Other groups have tried to construct such protein-based fibers using a trial-and-error approach, Buehler says. But this team has approached the problem systematically, starting with computer modeling of the underlying structures that give the natural silk its unusual combination of strength, flexibility and stretchiness.

Buehler’s previous research has determined that fibers with a particular structure — highly ordered, layered protein structures alternating with densely packed, tangled clumps of proteins (ABABAB) — help to give silk its exceptional properties. For this initial attempt at synthesizing a new material, the team chose to look instead at patterns in which one of the structures occurred in triplets (AAAB and BBBA).

Making such structures is no simple task. Kaplan, a chemical and biomedical engineer, modified silk-producing genes to produce these new sequences of proteins. Then Wong, a bioengineer and materials scientist, created a microfluidic device that mimicked the spider’s silk-spinning organ, which is called a spinneret.

Even after the detailed computer modeling that went into it, the outcome came as a bit of a surprise, Buehler says. One of the new materials produced very strong protein molecules — but these did not stick together as a thread. The other produced weaker protein molecules that adhered well and formed a good thread. “This taught us that it’s not sufficient to consider the properties of the protein molecules alone,” he says. “Rather, [one must] think about how they can combine to form a well-connected network at a larger scale.”

The team is now producing several more variants of the material to further improve and test its properties. But one wrinkle in their process may provide a significant advantage in figuring out which materials will be useful and which ones won’t — and perhaps even which might be more advantageous for specific uses. That new and highly unusual wrinkle is music.


The different levels of silk’s structure, Buehler says, are analogous to the hierarchical elements that make up a musical composition — including pitch, range, dynamics and tempo. The team enlisted the help of composer John McDonald, a professor of music at Tufts, and MIT postdoc David Spivak, a mathematician who specializes in a field called category theory. Together, using analytical tools derived from category theory to describe the protein structures, the team figured out how to translate the details of the artificial silk’s structure into musical compositions.

The differences were quite distinct: The strong but useless protein molecules translated into music that was aggressive and harsh, Buehler says, while the ones that formed usable fibers sound much softer and more fluid.

Buehler hopes this can be taken a step further, using the musical compositions to predict how well new variations of the material might perform. “We’re looking for radically new ways of designing materials,” he says.

Combining materials modeling with mathematical and musical tools, Buehler says, could provide a much faster way of designing new biosynthesized materials, replacing the trial-and-error approach that prevails today. Genetically engineering organisms to produce materials is a long, painstaking process, he says, but this work “has taught us a new approach, a fundamental lesson” in combining experiment, theory and simulation to speed up the discovery process.

Materials produced this way — which can be done under environmentally benign, room-temperature conditions — could lead to new building blocks for tissue engineering or other uses, Buehler says: scaffolds for replacement organs, skin, blood vessels, or even new materials for use in civil engineering.

Elliott Schwartz, professor emeritus of music at Bowdoin College, says: “For centuries, mathematics, logic and science have provided important models for musical structures, processes, and our understanding of sonic materials. The present research may well lead to one more important chapter in this ongoing story of mutual interaction.”

Jessica Garb, an assistant professor of biological sciences at the University of Massachusetts at Lowell, says, "The approach these authors take to designing new biomaterials is completely novel [and] represents a bold approach to unite bioengineering and music." She says that the researchers' suggestion of attempting to reverse the process — starting with the music to design new versions of the protein structure — "could result in some exciting new materials. The practical impacts could be enormous."

It may be that the complex structures of music can reveal the underlying complex structures of biomaterials found in nature, Buehler says. “There might be an underlying structural expression in music that tells us more about the proteins that make up our bodies. After all, our organs — including the brain — are made from these building blocks, and humans’ expression of music may inadvertently include more information that we are aware of.”

“Nobody has tapped into this,” he says, adding that with the breadth of his multidisciplinary team, “We could do this — making better bio-inspired materials by using music, and using music to better understand biology.”