Seeing the music in nature

Credits:
Photo: M. Scott Brauer
If anyone were going to discover the connections between molecular structures, mathematical concepts and musical scores, it’s not surprising that Markus Buehler would be the one. He has built his career on bridging the connections between disparate disciplines, asking simple questions as an approach to understanding the world.

Buehler grew up around engineering: His father is a mechanical engineer, his mother worked in the automotive industry and his two brothers became engineers as well (one mechanical, one computer). During his youth, Buehler was drawn to understanding how things worked, and started designing and building electronic circuits when he was about 11. Soon after, he began writing programs to regulate common things around his house, such as the household’s solar-panel system for heating water and his electric train setup, automating the switching of tracks. Later, he wrote programs that simulated the dynamics of stock trading.

In addition to building things, Buehler says, “I enjoyed breaking things apart to learn how they were made, and using what I had learned to build it again with a new approach or with improvements. I built a radio and an intercom system for our house by taking apart telephones. It took a couple of iterations, but I finally got it to work well.”

On the side, Buehler taught himself how to play several instruments and began composing his own pieces. Though he no longer finds time to compose music, he enjoys sharing his musical interests with his children, including teaching them to play the guitar. His passion for music has also come into play recently in his research, which found significant correlations between the structure of spider webs and principles of musical composition.

During high school, Buehler was fascinated by chemistry and intrigued by how materials derive their properties from the structure of their molecules. After earning his PhD at the Max Planck Institute in Stuttgart, Germany, he went to the California Institute of Technology as a postdoc. That’s where he began working on computer simulations of chemically complex materials, and began to incorporate such models in the description of biological materials — a specialty that has remained a cornerstone of his research ever since. 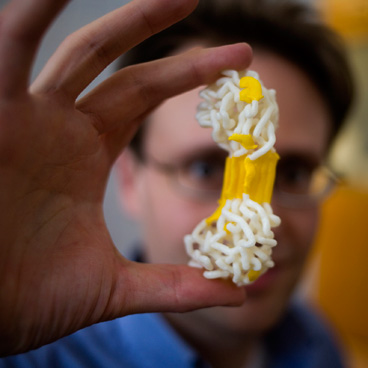 “I changed fields completely, but only in terms of the application of my work,” he says. Having done his doctoral research in materials science working on metals, he decided to focus on understanding features of natural phenomena, studying biological materials such as bone, spider webs or the proteins that make up the structures in our body’s cells.

“I saw an opportunity to combine a chemistry-based approach with molecular simulations and multiscale modeling,” Buehler says. Such approaches can be used not only to understand the function of biological materials in their physiological context, but also to appreciate the breakdown of diseased tissues.

Between nature and engineering

Given his focus on biological materials, people often ask Buehler how he ended up on the faculty of MIT’s Department of Civil and Environmental Engineering — a field more traditionally associated with concrete and steel on the one hand, and oceans and ecosystems on the other. “My work falls in between these fields, at the interface between the natural and the engineering-built world” he says. “I saw an opportunity to work on projects that could be in useful for both sides. It’s a unique combination to work at this interface, and a good fit for what I was interested in.” He was awarded tenure last fall.

Since joining the MIT faculty in 2006, Buehler has focused on understanding biological materials such as spider silk and the tangled masses of protein known as amyloids — primarily as a way to understand how their complex structures could improve the functional properties of manmade materials. He has also collaborated with his wife, whose experimental research at Harvard University focused on the interactions of cells with materials. “She has taught me a lot about biology, and how simulations might contribute to the field,” he says.

But “our focus is not to just copy nature” or the kinds of materials nature produces, Buehler says. Rather, he’d like to learn the underlying principles of how complex, hierarchical structures with useful properties can be assembled from the simplest of building blocks — and how engineers can actually apply such knowledge in different materials or in different problems altogether.

“Here, I feel like I have an opportunity to do something new,” Buehler says. “At MIT, we don’t believe in keeping things the same, we continue to push the boundaries of innovation.” Civil and environmental engineering research “is no longer just about building bridges, it’s about using nanotechnology and scalability to improve the materials we use to build and maintain our infrastructure, and to improve the interface between the natural and built world from the tiny atoms to the tallest of structures. It’s exciting to be part of redefining this field.”

Responsible AI for Social Empowerment and Education (RAISE) seeks to empower more people to participate in, and benefit from, AI.

DELPHI, an artificial intelligence framework, can give an “early-alert” signal for future key technologies by learning from patterns gleaned from previous scientific publications.

The new concentration extends the options for Asian languages at MIT, which also include Japanese and Mandarin.

3 Questions: President Reif on the search for MIT’s next chancellor