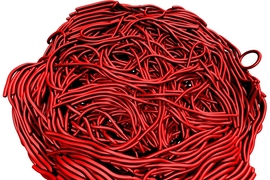 Caption:
A close-up view of an amyloid plaque model, showing the entangled structure of amyloid fibrils that form a sticky plaque.
Credits:
Image: M. Solar, MIT
When most people hear the word amyloid, they immediately think of Alzheimer's disease. And indeed, it was in the brains of Alzheimer's patients that these dense protein masses were first identified. But it turns out that besides playing a role in a number of diseases, amyloids also play an important structural role in many organisms from bacteria to mammals, and might point the way to a whole new category of biologically inspired synthetic materials.

Each protein normally folds itself into a specific shape that governs many aspects of its interactions with other materials and organisms. But almost all proteins and peptides (organic molecules that are similar to proteins but shorter) can alternatively form amyloids, which all have the same essential structure but form dense, concentrated masses instead of precisely folded shapes. These densely packed cores consist of stacks of molecular structures called beta sheets, tightly bound together by hydrogen bonds; a single "seed" of amyloid can induce many of the nearby proteins to collapse into similar amyloid structures.

Now Markus Buehler, an associate professor of civil and environmental engineering at MIT, and Tuomas Knowles, a lecturer in physical chemistry at the University of Cambridge in the U.K., have reviewed and analyzed the details of how amyloids form, the different characteristics of strength and adhesion that they can assume, and their potential as the basis for new materials. Their analysis, encompassing both experimental and computational approaches, was published July 31 in the journal Nature Nanotechnology. The work was funded primarily by the Office of Naval Research with additional support from the National Science Foundation, the Army Research Office and the Air Force Office of Scientific Research.

"Once you form an amyloid, there's no way back" to the normal protein shape, Buehler says. Normal proteins naturally break down and their constituent parts are recycled within a cell, but amyloids stubbornly resist that breakdown — one of the features that give them their unusual strength as structural materials.

Some bacteria, such as the ubiquitous E. coli, produce amyloid-based biofilms that help them adhere to surfaces or to other cells, even in a liquid environment. "They are very sticky," Buehler says. "They're also sticky in the brain, which is why they don't break down easily. They interfere with the functioning of tissues." Concentrations of amyloids within the human brain may play a role in the onset of Alzheimer's disease, Parkinson's disease and other neurological conditions.

In addition to their stickiness, amyloids are exceptionally strong and resilient structures that can be used to form internal scaffolding to support the structure of cells. Buehler and Knowles have analyzed in detail the internal arrangement of amyloids, which involve a hierarchy of structures at different scales — very similar, for example, to the structure that gives silk its exceptional strength. Buehler compares this hierarchical structuring to the way words, sentences and entire books of great variety can be created from just a limited set of building blocks in the form of letters of the alphabet.

Buehler and Knowles found that the stiffness of most protein materials is correlated with their position in an organism: The softest proteins such as actin or intermediate filaments appear inside cells; stiffer materials, such as collagen, occur just outside cells; and the stiffest materials, such as bone or silk, typically form an exterior structural skeleton. But amyloids are a notable exception to this rule, showing exceptional stiffness even within tissues — which may contribute to their role in promoting disease.

A first step toward the exploitation of amyloids in engineering, Buehler says, would be to produce protein materials with specific desired attributes, such as structures that attach themselves to atoms of metal. Then, these proteins could be induced to form amyloids that retain these attributes. This process can be carried out "with very high precision," he says. "It's much easier to control than protein folding."

Buehler says amyloids might be used to produce nanowires for use in highly miniaturized circuits, and it's even possible to produce more complex structures such as coaxial nanowires — wires surrounded by conductive cylinders, such as the cables used for television signals, which protect currents running through them from electromagnetic interference.

Other applications under development include the use of amyloid fibrils as templates to control the orientation of polymers in new organic solar cells, their use for controlled-release drug delivery, and for producing three-dimensional scaffolding for tissue repair in the brain — a remarkable turnabout of their destructive role in neurodegenerative disease. Another potential application: adhesives resistant to solvents as well as water.

Ehud Gazit, professor of nanobiology and vice president for research and development at Tel Aviv University in Israel, says this analysis is "novel and remarkably important. As amyloids represent one of the most fundamental structures in nature — both from the pathological point of view as well as from the structural and functional one — true understanding of the molecular basis of [their] mechanical properties is central for biology and medicine." The study of the molecular mechanics of such structures "paves a new way for the understanding of other ultra-rigid biological structures —[including] macroscopic ones, such as spider silk, and microscopic ones, such as cytoskeleton," he says.