Study may be a step toward shelf-stable versions of the hormone, which is used to control diabetes.
Watch Video
Anne Trafton | MIT News Office
Publication Date:
Press Inquiries

Caption:
MIT chemists have determined the structure of the amyloid fibers formed by the hormone glucagon when it is dissolved in liquid. Each fibril is made of sheets of peptides that run antiparallel to each other.
Credits:
Image courtesy of the researchers

Patients with type 1 diabetes have to regularly inject themselves with insulin, a hormone that helps their cells absorb glucose from the bloodstream. Another hormone called glucagon, which has the opposite effect, is given to diabetic patients to revive them if they become unconscious due to severe hypoglycemia.

The form of glucagon given to patients is powdered and has to be dissolved in liquid immediately before being injected, because if stored as a liquid, the protein tends to form clumps, also called amyloid fibrils. A new study from MIT reveals the structure of these glucagon fibrils and suggests possible strategies for altering the amino acid sequence so that the protein is less likely to become clumped.

“Insulin in solution is stable for many weeks, and the goal is to achieve the same solution stability with glucagon,” says Mei Hong, an MIT professor of chemistry and one of the senior authors of the study. “Peptide fibrillization is a problem that the pharmaceutical industry has been working for many years to solve.”

Using nuclear magnetic resonance (NMR) spectroscopy, the researchers found that the structure of glucagon fibrils is unlike any other amyloid fibrils whose structures are known.

Yongchao Su, an associate principal scientist at Merck and Co., is also a senior author of the study, which appears in the June 24 issue of Nature Structural and Molecular Biology. MIT graduate student Martin Gelenter is the lead author of the paper. 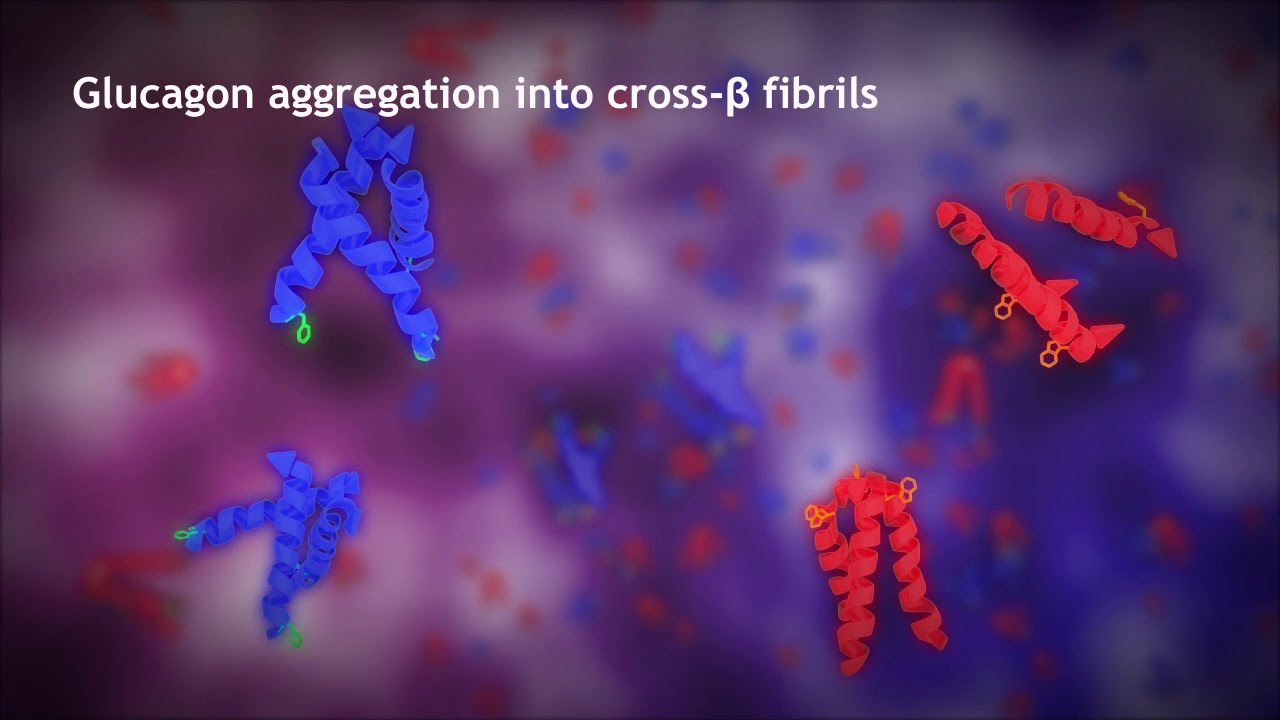 Amyloid fibrils form when proteins fold into a shape that allows them to clump together. These proteins are often associated with disease. For example, the amyloid beta protein forms plaques associated with Alzheimer’s disease, and alpha synuclein forms Lewy bodies in the neurons of Parkinson’s disease patients.

Hong has previously studied the structures of other amyloid peptides, including one that binds to metals such as zinc. After giving a talk on her research at Merck, she teamed up with scientists there to figure out the structure of the fibrillized form of glucagon.

Inside the human body, glucagon exists as an “alpha helix” that binds tightly with a receptor found on liver cells, setting off a cascade of reactions that releases glucose into the bloodstream. However, when glucagon is dissolved in a solution at high concentrations, it begins transforming into a fibril within hours, which is why it has to be stored as a powder and mixed with liquid just before injecting it.

The MIT team used NMR, a technique that analyzes the magnetic properties of atomic nuclei to reveal the structures of the molecules containing those nuclei, to determine the structure of the glucagon fibrils. They found that the glucagon fibril consists of many layers of flat sheets known as beta sheets stacked on top of one another. Each sheet is made up of rows of identical peptides. However, the researchers discovered that, unlike any other amyloid fibril whose structure is known, the peptides run antiparallel to each other. That is, each strand runs in the opposite direction from the two on either side of it.

In addition, the researchers found that the glucagon beta strand has no disordered segments. Each of the tens of thousands of peptide strands that make up the fibril is held tight in the antiparallel beta sheet conformation. This allows each peptide to form a 10-nanometer-long beta strand.

“This is an extremely stable strand, and is the longest beta strand known so far among any proteins,” Hong says.

One major reason that glucagon fibrils are so stable is that side chains extending from the amino acids making up the glucagon peptides interact strongly with side chains of the peptides above and below them, creating very secure attachment points, also called steric zippers, that help to maintain the overall structure.

Courtesy of the researchers.

While all previously studied amyloid fibrils have a fixed set of residues that form the steric zippers, in glucagon fibrils, even-numbered residues from one strand and odd-numbered residues from the neighboring strand alternately form the steric zipper interface between two beta sheet layers. This conformational duality is another novel feature of the glucagon fibril structure.

“We can see from this structure why the fibril is so stable, and why it’s so hard to prevent it from forming,” Hong says. “To block it, you really have to change the identity of the amino acid residues. I’m now working with a colleague here to come up with ways to modify the sequence and break those stabilizing interactions, so that the peptide won’t self-assemble to form this fibril.”

Such alternative peptide sequences could remain shelf-stable for a longer period of time in solution, eliminating the need to mix glucagon with liquid before using it.

“Considering the crucial physiological role of glucagon, it is encouraging that new structural data on this polypeptide hormone continue to be collected,” says Kurt Wuthrich, a professor of biophysics at ETH Zurich, who was not involved in the research. “Although the structural data reported here characterize an ‘unwanted’ form of glucagon, the authors point out that it promises to provide novel leads for engineering glucagon analogs which would have improved physico-chemical properties for its administration as a drug, specifically a reduced tendency to form amyloid fibers.”

The research was funded by Merck Sharp and Dohme Corp., a subsidiary of Merck and Co., and the National Institutes of Health.