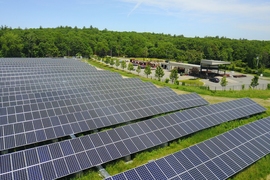 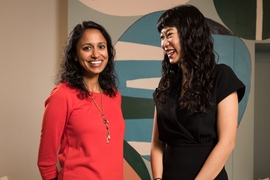 Rooftop solar panels are a great way for people to invest in renewable energy while saving money on electricity. Unfortunately, the rooftop solar industry only serves a fraction of society.

Many Americans are unable to invest in rooftop solar; they may be renters or lack the upfront money required for installations or live in locations that don’t get enough sun. Some states have tried to address these limitations with community solar programs, which allow residents to invest in portions of large, remote solar projects and enjoy savings on their electricity bills each month.

But as community solar projects have exploded in popularity in the last few years, higher-income households have been the main beneficiaries. That’s because most developers of community solar arrays require residents to have high credit scores and sign long-term contracts.

“We’re always pushing our developer partners to be more inclusive and customer-friendly,” says Solstice co-founder Sandhya Murali MBA ’15, who co-founded the company with Stephanie Speirs MBA ’17. “We want them to design contracts that will be appealing to the customer and kind of a no-brainer.”

To date, Solstice has helped about 6,400 households sign up for community solar projects. The founders say involving a more diverse pool of residents will be essential to continue the industry’s breakneck growth.

“We think it’s imperative that we figure out how to make this model of residential solar, which can save people money and has the power to impact millions of people across the country, scale quickly,” Murali says.

In 2014, Speirs had been working on improving access to solar energy in Pakistan and India as part of a fellowship with the global investment firm Acumen. But she realized developing countries weren’t the only areas that dealt with energy inequalities.

“There are problems with solar in America,” Speirs says. “Eighty percent of people are locked out of the solar market because they can’t put solar on their rooftop. People who need solar savings the most in this country, low- to moderate-income Americans, are the least likely to get it.”

Speirs was planning to come to MIT’s Sloan School of Management to pursue her MBA the following year, so she used a Sloan email list to see if anyone was interested in joining the early-stage venture. Murali agreed to volunteer, and although she graduated in 2015 as Speirs entered Sloan, Murali spent a lot of time on campus helping Speirs get the company off the ground. Speirs also received a fellowship from MIT's Legatum Center.

“Steph’s time at Sloan was focused on Solstice, so we kind of became an MIT startup,” Murali says. “I would say MIT sort of adopted Solstice, and we’ve grown since then with support from the school.”

Community solar is an effective way to include residents in solar projects who might not have the resources to invest in traditional rooftop solar panels. Speirs says there are no upfront costs associated with community solar projects, and residents can participate by investing in a portion of the planned solar array whether they own a home or not.

When a developer has enough resident commitments for a project, they build a solar array in another location and the electricity it generates is sent to the grid. Residents receive a credit on their monthly electric bills for the solar power produced by their portion of the project.

Still, there are aspects of the community solar industry that discourage many lower-income residents from participating. Solar array developers have traditionally required qualified customers to sign long contracts, sometimes lasting 30 years, and to agree to cancellation fees if they leave the contract prematurely.

Solstice, which began as a nonprofit to improve access to solar energy for low-income Americans, advocates for customers, working with developers to reduce contract lengths, lower credit requirements, and eliminate cancellation fees.

As they engaged with developers, Solstice’s founders realized the challenges associated with recruiting and managing customers for community solar projects were holding the industry back, so they decided to start a for-profit arm of the company to work with customers of all backgrounds and income levels.

“Solstice’s obsession is how do we make it so easy and affordable to sign up for community solar such that everyone does it,” Speirs says.

In 2016, Solstice was accepted into The Martin Trust Center for MIT Entrepreneurship’s delta v accelerator, where the founders began helping developers find customers for large solar projects. The founders also began developing a web-based customer portal to make participation in projects as seamless as possible.

But they realized those solutions didn’t directly address the biggest factor preventing lower-income Americans from investing in solar power.

“To get solar in this country, you either have to be able to afford to put solar on your rooftop, which costs $10,000 to $30,000, or you have to have the right FICO score for community solar,” Speirs says, referring to a credit score used by community solar developers to qualify customers. “Your FICO score is your destiny in this country, yet FICO doesn’t measure whether you pay your utility bills on time, or your cell phone bills, or rental bills.”

With this in mind, the founders teamed up with data scientists from MIT and Stanford University, including Christopher Knittle, the George P. Shultz Professor at MIT Sloan, to create a new qualification metric, the EnergyScore. The EnergyScore uses a machine learning system trained on data from nearly 875,000 consumer records, including things like utility payments, to predict payment behavior in community solar contracts. Solstice says it predicts future payment behavior more accurately than FICO credit scores, and it qualifies a larger portion of low-to-moderate income customers for projects.

Last year, Solstice began handling the entire customer experience, from the initial education and sales to ongoing support during the life of contracts. To date, the company has helped find customers for solar projects that have a combined output of 100 megawatts of electricity in New York and Massachusetts.

And later this year, Solstice will begin qualifying customers with its EnergyScore, enabling a whole new class of Americans to participate in community solar projects. One of the projects using the EnergyScore will put solar arrays on the rooftops of public housing buildings in New York City in partnership with the NYC Housing Authority.

Ultimately, the founders believe including a broader swath of American households in community solar projects isn’t just the right thing to do, it’s also an essential part of the fight against climate change.

“[Community solar] is a huge, untapped market, and we’re unnecessarily restricting ourselves by creating some of these contract barriers that make community solar remain in the hands of the wealthy,” Murali says. “We’re never going to scale community solar and make the impact on climate change we need to make if we don’t figure out how to make this form of solar work for everyone.”