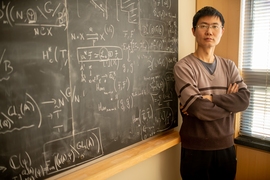 ↓ Download Image
Caption: Professor Zhiwei Yun has struck up fruitful collaborations with others in the math department, all of whom share a common quality: “We are all driven by curiosity, and the beauty of the subject itself,” he says.
Credits: Image: Bryce Vickmark 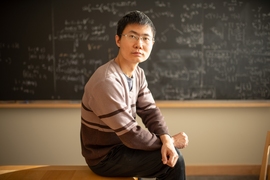 ↓ Download Image
Caption: On mentoring graduate students, Yun says that “every student has their own taste, and finds problems that interest themselves, and I encourage this. That should make the transition from student to researcher more smooth.”
Credits: Image: Bryce Vickmark

Caption:
Professor Zhiwei Yun has struck up fruitful collaborations with others in the math department, all of whom share a common quality: “We are all driven by curiosity, and the beauty of the subject itself,” he says.
Credits:
Image: Bryce Vickmark

Caption:
On mentoring graduate students, Yun says that “every student has their own taste, and finds problems that interest themselves, and I encourage this. That should make the transition from student to researcher more smooth.”
Credits:
Image: Bryce Vickmark

Since he was a child growing up in Changzhou, China, Zhiwei Yun’s appetite for mathematics was nothing but linear, growing with each year as he absorbed lessons and solved increasingly difficult problems, both in the classroom and on his own time, with a zeal that can only come from finding one’s true passion.

But when Yun was a graduate student, he felt his trajectory come up short. In his third year, he was in a panic as he faced for the first time the difference between learning established mathematics and discovering new math as a researcher.

But his advisor Bob MacPherson, a professor at the Institute for Advanced Study, kept encouraging him to find his own way, saying “only a problem found by yourself can really interest and drive you to the final solution.”

“It was a hard time,” Yun recalls. “The hardest part of pure math research was knowing whether and when to give up on a problem.”

In his fourth year, Yun finally broke through his own mental wall and found a topic for his thesis, which continues to be a rich vein of exploration for him today.

“Being stuck and having to abandon your own idea is hard to do, and you need a lot of patience — there’s a psychological difficulty in research,” says Yun, now a newly tenured member of the MIT mathematics faculty. “Looking back, it was a big fortune. Now I’m not afraid of being stuck on a problem.”

Before he discovered mathematics, Yun was a child who loved to draw. He particularly liked calligraphy and would spend hours after school attempting to reproduce Chinese paintings and inscriptions.

He recalls not being particularly interested in math early on, and in fact has kept some of his workbooks from that time, which show several math problems left blank here and there. But in third grade, something sparked, and the workbooks suddenly filled up, and then some.

That year, Yun’s math teacher posted challenging math problems on the blackboard after class as a sort of extra credit. For students like Yun who could solve them, the teacher would feed more difficult questions. Yun soon developed a personal rapport with the teacher, along with an expanding interest in math.

“It was a feeling of solving something that most people couldn’t solve, I think, that triggered my interest,” Yun says.

With his natural aptitude, Yun was funneled into China’s Math Olympiad track, and his selection exams in high school were good enough to place him on the extremely competitive and prestigious Chinese national team. In 2000, he and five of the very best math students in the country flew to South Korea, where they won gold in the 41st International Mathematical Olympiad.

After high school, Yun entered Peking University, where he found a much deeper, thrilling well of knowledge.

“In the days of Math Olympiad, we were just seeing the tips of an iceberg,” Yun says. “Now we were diving into the water and seeing the whole foundations of mathematics. And it was much more interesting than what was above water.”

Early on, he was taken with Galois theory, a mathematical solution to a problem that had puzzled mathematicians for centuries. Namely, an equation of the second degree, such as ax2+bx+c=0, can be solved by introducing a square root. Similarly, third- and fourth-degree equations can be solved with higher-order roots. But when it came to fifth-degree equations, a root-derived solution seemed impossible. It wasn’t until the 19th century when 18-year-old Évariste Galois, from France, came up with a solution.

Galois’ theory is now viewed as a key connection between number theory and abstract algebra — two subjects that were traditionally considered distinct.

“His solution was not understood by his contemporaries,” says Yun, who spent the first months of his college career absorbing the theory. “I still find it amazing how a teenager could go this far.”

After graduation, Yun headed to Princeton University to pursue a PhD in pure mathematics. When he did eventually land on a thesis topic, it was in representation theory, a branch of mathematics that seeks to represent abstract algebraic structures in concrete terms such as matrices or symmetries of shapes.

“The beauty of the subject”

From Princeton, Yun took up a brief stay at MIT as a postdoc, with an office on the first floor of Building 2, looking out on the Charles River. He spent his time soaking up as many seminars as he could attend, and would work happily into the night, before biking back to his Somerville apartment.

“On the whole, there was not much distraction,” Yun says. “Everything was about math research.”

As his postdoctoral work was wrapping up, he accepted a faculty position at Stanford University, while his wife, Minlan Yu, whom he met at Princeton, taught computer science at the University of Southern California. That same year, their first child was born, and Yun spent the next few years on a constant commute, traveling to Los Angeles every week or two to see his family.

“I was booking I don’t know how many tickets each year, and I remember one time arriving at San Francisco airport, and realizing I had booked a ticket for the wrong direction,” Yun recalls. “That’s when I realized I didn’t have a sense of home, and that we really needed to move to the same place.”

They both soon accepted offers to teach at Yale University, and spent a year and a half there before he took up his current professorship at MIT in January 2018, and she started as a professor in computer science just up the road, at Harvard University.

Of the graduate students Yun has so far mentored, he says that “every student has their own taste, and finds problems that interest themselves, and I encourage this. That should make the transition from student to researcher more smooth.”

He has struck up fruitful collaborations with others in the math department, all of whom share a common quality: “We are all driven by curiosity, and the beauty of the subject itself,” Yun says.

Yun continues to work on similar problems related to the Langlands program, and has found life to be more balanced, with just enough time for math, and family.

“My son, who is in kindergarten, was doing some first grade math problems before going to bed recently, and he asked me, ‘If I finish the fifth of this series of math books, am I close to you?’” Yun laughs proudly. “According to my grade school workbooks, he’s already ahead of me! I’m glad to see he’s eager to learn mathematics. Either way, he should follow his heart.”