The technology of enchantment 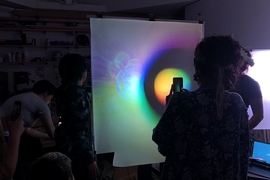 ↓ Download Image
Caption: Prathima Muniyappa (with camera) and other class members examining a student demo. In studying various ambiguous images and works, students discover how emotional content and prior experiences contribute to what we think we see.
Credits: Image: Graham Jones

Caption:
Prathima Muniyappa (with camera) and other class members examining a student demo. In studying various ambiguous images and works, students discover how emotional content and prior experiences contribute to what we think we see.
Credits:
Image: Graham Jones

An audible gasp goes through the classroom as Seth Riskin, manager of the MIT Museum Studio and Compton Gallery, uses his hand to trace streams of light through the empty air. The illusion is a simple one: Gradually turning up the speed on a strobe light, Riskin creates the visual magic by sweeping his hand through the rapidly changing beam.

A strobe light is hardly the most advanced technology found in an MIT lab, but as co-instructor and professor of anthropology Graham Jones comments, “In 10 years of teaching at MIT, I’ve never heard a whole classroom gasp like that.”

However basic, Riskin’s deft manipulation of light produces a profound effect, one that the students experience collectively in a moment of surprise and wonder. That’s what a new anthropology class, 21A.S01 (Paranormal Machines), is all about: exploring the human experience of the disconcerting and the uncanny in relation to technology and discovering how people and cultures build stories and beliefs around out-of-the ordinary experiences.

In everyday parlance, the word paranormal usually refers to the phantasmal world of ghost hunters and clairvoyants. But Riskin and Jones use the word differently, and more fundamentally, to encompass qualities of human experience that challenge our typical expectations and perceptions. It turns out that this is a great topic of mutual inquiry for the arts, with their capacity to create new and transformative experiences, and anthropology, a science that studies the diversity of experience. “When we explore the overlap of art and anthropology," says Riskin, “we find deep and complex connections.”

A cross-disciplinary class development grant from MIT’s Center for Art, Science and Technology (CAST) allowed Riskin and Jones to make this timely exploration. The qualities of experience that students in 21A.S01 are studying have a new relevance in our era, as artificial intelligence becomes ever more a part of our daily lives and we begin to encounter machines that seem to think, see, and understand — that can seem to have a life of their own. People perceive and experience such technology in a wide range of ways, including with wonder, anxiety, excitement, delight, fear, uncertainty, and affection.

Students in the course are making anthropological and artistic explorations of such perceptions, using a humanistic lens to better understand our evolving relationship to technology. The experiences generated in the class give students a chance to consider the ways human beings make meaning around multilayered and enigmatic experiences, including interactions with advanced technologies.

“The students are learning about the course content experientially,” says Riskin. “It’s a new method for many of the students that draws on art practice and perception.” 21A.S01 asks students to use a mix of creative interpretation, theoretical understanding, and personal reflection as well as technical knowledge and information.

“This approach allows us to learn along with our students,” Jones adds. “I’m constantly discovering things that enrich my anthropological understanding, and that I want to fold back into future iterations of the class. This is precisely why CAST’s support is so transformative.”

Students in the course are first introduced to anthropological readings and artistic creations — from kinetic art to ritual objects — then strive to develop an understanding of how the human mind can perceive these works as alive, aware, or responsive. CAST’s support also ensures that students have the resources to develop their own demos and engineer experiences that can produce wonder, uncertainty, or fascination.

A laboratory for the visual arts

The course runs in the MIT Museum Studio and Compton Gallery, a bustling, glass-walled workshop and experimental exhibition gallery in Building 10 operated by the MIT Museum.

Home to a creative community of practice exploring commonalities between scientific and artistic methods, the space dazzles with the lights and sounds of large-scale technological art pieces made by past students. Divided into alternating studio sessions and seminars, led respectively by Riskin and Jones, the course was developed by the two instructors collaboratively. “What’s interesting to us is looking at the kind of uncanny experiences or perceptions that can give rise to complex beliefs,” says Jones.

“When you write about those things in an anthropological text you’re containing the power of the experience with language, analysis, and critical commentary,” he adds. “A part of what we wanted to explore with technological works of art is the possibility of engendering those kinds of experiences and perceptions and dwelling on them, focusing on experiencing their power.”

“We talk about the minimal amount of signal it takes for something to be perceived as human-like,” says class member Erica Yuen, a second-year graduate student in the MEng program. “Turns out that it doesn’t take that much. The course has challenged my perception of reality because it has shown that we project our past experiences onto ambiguous signals to create a story.”

In one studio session focused on abstraction and ambiguity, students are presented with a thin sheet of translucent paper and an array of small lights. Using webcams and other sensors, the students can create real-time variations in the lights misted by paper. At the end of the studio session, one group has created a simple, soft glowing orb that used ultrasonic signals to detect movement. If someone moves too quickly or got too close, the orb vanishes, only to slowly reappear elsewhere on the array. Presenting the creation to the class, a fidget too close to the sensors means that the entire apparatus went dark.

Why do we assign emotion and narrative to nonhuman, nonnarrative visuals? That’s one of the foundational questions of the course, and to begin to answer it, students explore the moments of ambiguity where those perceptions begin.

“Artists are interested in playing with states of indeterminacy or states of ambiguity,” says Jones. “Often the best art is powerful precisely because it can’t be resolved into any one simple interpretation, and the value of the artwork really hinges on the possibility that multiple interpretations might simultaneously be true, and not mutually exclusive. We’re trying to carve out a complementary space between anthropological ideas and artistic expression — in terms of these experiential moments of interpretive uncertainty.”

In one studio session focused on ambiguous mechanical motion, Liv Koslow, a senior majoring in mathematics, shows off her team’s demo: reacting to speed and proximity, the different materials of their mechanism move — some predictably, some unpredictably. While the machine doesn’t have a function the way that, say, a Roomba or a surveillance drone might, Koslow explains that the principle of its interaction with humans is the same: The machine is designed to immediately indicate an ability to sense and react — except in this case, it’s also conveying the appearance of emotive behavior.

The students don’t only work with ambiguity around machines’ perceived behavior. Using a metallic material that, through simple pressure changes, can be made to appear fluid, Ether Bezugla, a sophomore majoring in electrical engineering and computer science, demonstrates how design elements can elevate or manipulate human perception. Bezugla, who was drawn to the class by their interest in exploring ambiguity of the senses, uses this surprising design exercise to “explore the threshold at which a person perceives abnormality” and begins trying to make meaning to explain it.

The applications of ambiguity

Jones’s anthropological research has long focused on entertainment magic — what we think of as stage magic, tricks, and illusions. 21A.S01 is a departure for him; the class is about wonder, not illusion. Ironically, he says, “some of the fiercest critics of wondrous, enigmatic experiences can be magicians because they understand how easily people can be misled in their beliefs.”

The concepts developed in this course bring key questions and insights about human perception into contact with the cutting edge of human-interfacing technology: How can technologies deepen human experience and enrich the inner landscape? How do we push technology to feel more “alive” or more human? What — as we chat with Alexa or name our Roombas — makes us treat our technology as if it really has a life of its own?

Yuen says the illuminating experiences of the class will inform her work in a computational approach to cognitive sciences. Working with the most minute aspects of perception and reaction, she also plans to apply the experiences of Paranormal Machines to her artwork on ambiguity and facial structures.

Riskin sees the class as a contribution to what MIT President L. Rafael Reif has termed the “bilingual” educational mission at MIT: for students to develop expertise in both technical and humanistic fields and ways of exploring and knowing. “Connecting across disciplinary languages, in this case, art and anthropology, brings precision and method to what we mean by bilingual intelligence and how it adds up in a learning experience,” Riskin says.

3Q: The interface between art and neuroscience