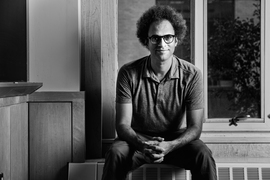 ↓ Download Image
Caption: “I would say that a surprisingly large number of my students at MIT are juniors and seniors, and they often say to me, ‘Oh, I wish I had found out about anthropology sooner,’” anthropologist Graham Jones remarks. “And I say, ‘Oh the same thing happened to me in college.’ Not many people come to college knowing what anthropology is.” 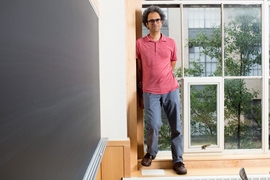 ↓ Download Image
Caption: “I would say that a surprisingly large number of my students at MIT are juniors and seniors, and they often say to me, ‘Oh, I wish I had found out about anthropology sooner,’” anthropologist Graham Jones remarks. “And I say, ‘Oh the same thing happened to me in college.’ Not many people come to college knowing what anthropology is.”

Caption:
“I would say that a surprisingly large number of my students at MIT are juniors and seniors, and they often say to me, ‘Oh, I wish I had found out about anthropology sooner,’” anthropologist Graham Jones remarks. “And I say, ‘Oh the same thing happened to me in college.’ Not many people come to college knowing what anthropology is.”

Many MIT professors were in a classroom or lab when they first encountered the subjects they now study. Not anthropologist Graham Jones. He found his life’s work in a New York City magic store.

The year was 2001, and Jones was a graduate student. A class he was taking on the transmission of knowledge in society assigned students to videotape people who teach skills to apprentices. So Jones, literally looking around the streets of Manhattan for ideas, wound up in a magic shop, inspired and relieved: At least he would have enough material to complete the assignment.

What Jones didn’t realize was that he had encountered the subject that would fuel his academic career — all the way to MIT, where he received tenure earlier this year.

“I had a powerful feeling that magic is a beautiful thing: It’s fun, and I’m interested in it and excited by it, so I’m just going to run with it,” Jones recalls.

Run with it, Jones has. He wrote his dissertation — which became his first book — about the secretive world of French magicians, studying how a small band of practitioners keeps their tricks tightly guarded while passing along enough knowledge to help the craft flourish.

Jones’ second book, to be published this fall, broadens the lens and looks at the way early anthropologists used the notion of “magic” to understand the systems of belief they encountered in distant, non-Western cultures. While retracing the history of his own discipline, Jones discovered that anthropologists, when interpreting the ritual practices of shamans and other holy figures, often drew comparisons with the trickery of stage magicians in their own societies.

As Jones is quick to note, watching a magician perform tricks and consulting a shaman for medical help represent two very different scenarios involving magic. By lumping them together, Jones argues, anthropologists developed influential theories about the supposed cultural difference between “modern” people who take a rational, incredulous stance about magic performances and “primitive” people who regard magic with a naïve credulity.

Retracing these debates about the meaning of magic, Jones is able to drill down toward bedrock-level issues about belief and the nature of knowledge — how we know what we know, and how we form our beliefs about the world.

“Magic, in a way, is a microcosm for culture,” Jones says. One of the biggest debates originally shaping anthropology, he adds, was “how to understand the prevalence and persistence of beliefs in things, forces, or abilities that seem fundamentally irrational. Why do otherwise rational people believe in the magic powers of witches, healers, shamans, and sorcerers, even when they have evidence to the contrary? Are they just dupes, or is there something else going on?”

And thus, in Jones’ way, studying magic is a neat trick: It makes us confront big questions about knowledge.

Jones mostly grew up in Conifer, Colorado, a town in the Rocky Mountains. His mother was a caseworker for the Social Security Administration, and his father was a teacher, who taught Jones algebra in junior high school and physics in high school. When Jones became an undergraduate, at Reed College, he first tried studying physics. Then he tried philosophy. But neither one stuck.

On some level, Jones was searching for a subject that would say something deep about the structure of our world. But as he soon realized, he also wanted to explore people’s search for beauty and meaning. So he majored in literature and did not take an anthropology class until his college days were almost over — something he now sees as a familiar pattern in students.

“I would say that a surprisingly large number of my students at MIT are juniors and seniors, and they often say to me, ‘Oh, I wish I had found out about anthropology sooner,’” Jones remarks. “And I say, ‘Oh the same thing happened to me in college.’ Not many people come to college knowing what anthropology is.”

Jones quickly realized that by studying anthropology, he could have it both ways, examining big questions by studying how people in particular societies had formed beliefs about them.

“It provided a way of approaching philosophical questions, like how people deal with existential doubt, but in the context of lived human experience,” Jones says. “I had the feeling that I had finally found the path to satisfying my intellectual interests. … I liked the way it emphasized and required human contact, and accountability to the people you write about and represent.”

In graduate school, at New York University, Jones settled on writing his dissertation about magicians in Paris, the place where a pioneer named Jean-Eugene Robert-Houdin established magic as a form of performance art in the mid-19th century. (America’s most famous magician, Harry Houdini, took his stage name from Robert-Houdin.)

Immersing himself in the subject, Jones spent almost two years as an apprentice magician in Paris, developing his own repertoire of tricks and passing an exam to join France’s largest professional association for magicians. His resulting book, “Trade of the Tricks,” published by the University of California Press in 2011, gained acclaim as the first-ever anthropological study of the field. His new book, “Magic’s Reason: An Anthropology of Analogy,” will be published by the University of Chicago Press.

Part of Jones’ intention with the second book, he says, “is to think more broadly about how anthropologists can ever know anything,” and shed light on ways scholars have wrestled with the status of their own conclusions: “How do you ever know about another culture, [unless] it’s through the categories or lenses of your own culture? It’s always an interpretation, so how do you ensure it’s a good one?”

“I always have more to learn”

In person, Jones can be self-effacing about his research: “Teaching is what I really care about,” he says. And indeed Jones won MIT’s 2013 Harold E. Edgerton Faculty Achievement Award, granted to junior professors, in part for his teaching.

On that front, Jones has developed a wide variety of classes intended to introduce undergraduates to both the dizzying range of questions anthropologists grapple with and the careful methodology of the discipline.

One class Jones co-teaches with Heather Paxson, the William R. Kenan, Jr. Professor of Anthropology, is called “The Meaning of Life” and delves into the philosophical questions that anthropologists encounter when they study belief systems in other societies. Another course, “Teaching and Learning,” aims to replicate the same kinds of inquiries that led Jones to discover magic as a vital topic in his own student days.

This year, Jones has unveiled a new course, “Magic, Science, and Religion,” which tackles the questions about the status of knowledge and belief that he has examined in his own research.

“The topic of religion is so important in studying how our world works,” Jones says. “I’m happy to foster that kind of exploration for MIT students.” Moreover, he adds, the rejection or denial of science is “one of the biggest, if not the single biggest issue of our times. In 2017, the vicissitudes of history are such that these musty old anthropological debates now seem like the most topical thing I could teach.”

That doesn’t mean Jones and his students will arrive at easy answers or solutions for reconciling the conflicting beliefs that different social groups hold. But it does mean he, and his students, will keep striving to understand more about the reasons why people believe the things they do, magical and otherwise.

“I feel my career has been a pursuit of an insight or understanding that’s always just slightly out of reach,” Jones says. “That’s a good reason for going into a field and staying in it. I always have more to learn. It’s something that’s inexhaustible.”

Pulling back the curtain