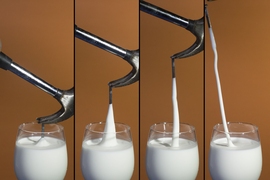 ↓ Download Image
Caption: A new model predicts how cornstarch and water, a non-Newtonian fluid, can behave like a solid or liquid, depending on how fast it’s deformed. When swirled slowly in a glass, the mixture acts as a liquid. But when deformed quickly, it can behave as a rubbery solid, forming a glue-like string as (shown here in series) a hammer pulls a nail out of the mixture.
Credits: Image: A. Baumgarten, K. Kamrin, and J. Bales

Caption:
A new model predicts how cornstarch and water, a non-Newtonian fluid, can behave like a solid or liquid, depending on how fast it’s deformed. When swirled slowly in a glass, the mixture acts as a liquid. But when deformed quickly, it can behave as a rubbery solid, forming a glue-like string as (shown here in series) a hammer pulls a nail out of the mixture.
Credits:
Image: A. Baumgarten, K. Kamrin, and J. Bales

It’s a phenomenon many preschoolers know well: When you mix cornstarch and water, weird things happen. Swish it gently in a bowl, and the mixture sloshes around like a liquid. Squeeze it, and it starts to feel like paste. Roll it between your hands, and it solidifies into a rubbery ball. Try to hold that ball in the palm of your hand, and it will dribble away as a liquid.

Most of us who have played with this stuff know it as “oobleck,” named after a sticky green goo in Dr. Seuss’ “Bartholomew and the Oobleck.” Scientists, on the other hand, refer to cornstarch and water as a “non-Newtonian fluid” — a material that appears thicker or thinner depending on how it is physically manipulated.

Now MIT engineers have developed a mathematical model that predicts oobleck’s weird behavior. Using their model, the researchers accurately simulated how oobleck turns from a liquid to a solid and back again, under various conditions.

Aside from predicting what the stuff might do in the hands of toddlers, the new model can be useful in predicting how oobleck and other solutions of ultrafine particles might behave for military and industrial applications. Could an oobleck-like substance fill highway potholes and temporarily harden as a car drives over it? Or perhaps the slurry could pad the lining of bulletproof vests, morphing briefly into an added shield against sudden impacts. With the team’s new oobleck model, designers and engineers can start to explore such possibilities.

“It’s a simple material to make — you go to the grocery store, buy cornstarch, then turn on your faucet,” says Ken Kamrin, associate professor of mechanical engineering at MIT. “But it turns out the rules that govern how this material flows are very nuanced.”

Kamrin, along with graduate student Aaron Baumgarten, have published their results today in the Proceedings of the National Academy of Sciences. 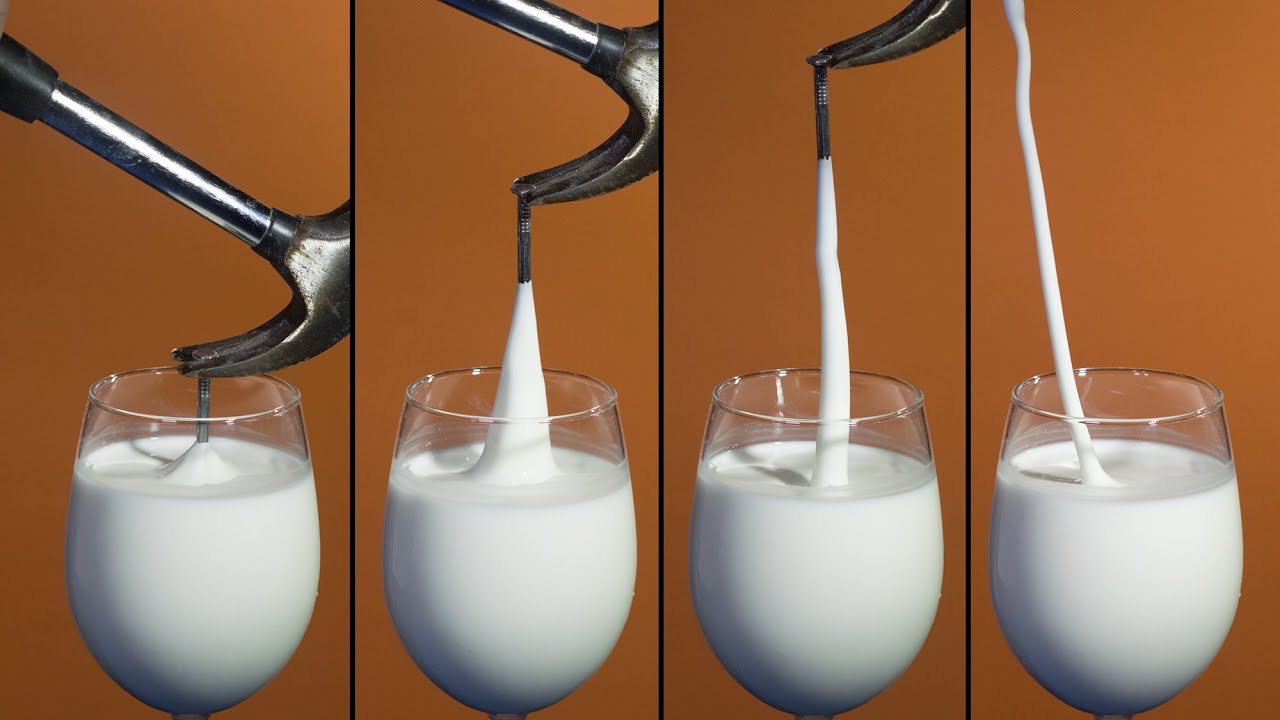 Kamrin’s primary work focuses on characterizing the flow of granular material such as sand. Over the years, he’s developed a mathematical model that accurately predicts the flow of dry grains under a number of different conditions and environments. When Baumgarten joined the group, the researchers started work on a model to describe how saturated wet sand moves. It was around this time that Kamrin and Baumgarten saw a scientific talk on oobleck.

“We’d seen this talk, and we had a lengthy debate over what is oobleck, and how is it different from wet sand,” Kamrin says. “After some vigorous back and forth with Aaron, he decided to see if we could turn this wet sand model into one for oobleck.”

Granular material in oobleck is much finer than sand: A single particle of cornstarch is about 1 to 10 microns wide and about one-hundredth the size of a grain of sand. Kamrin says particles at such a small scale experience effects that larger particles such as sand do not. For instance, because cornstarch particles are so small, they can be influenced by temperature, and by electric charges that build up between particles, causing them to slightly repel against each other.

“As long as you squish slowly, the grains will repel, keeping a layer of fluid between them, and just slide past each other, like a fluid,” Kamrin says. “But if you do anything too fast, you’ll overcome that little repulsion, the particles will touch, there will be friction, and it’ll act as a solid.”

This repulsion happening at the small scale brings out a key difference between large and ultrafine grain mixtures at the lab scale: The viscosity, or consistency of wet sand at a given packing density remains the same, whether you stir it gently or slam a fist into it. In contrast, oobleck has a low, liquid-like viscosity when slowly stirred. But if its surface is punched, a rapidly growing zone of the slurry adjacent to the contact point becomes more viscous, causing oobleck’s surface to bounce back and resist the impact, like a solid trampoline.

They found that stress was the main factor in determining whether a material was more or less viscous. For instance, the faster and more forcefully oobleck is disturbed, the “clumpier” it is — that is, the more the underlying particles make frictional, as opposed to lubricated, contact. If it is slowly and gently deformed, oobleck is less viscous, with particles that are more evenly distributed and that repel against each other, like a liquid.

The team looked to model the effect of repulsion of fine particles, with the idea that perhaps a new “clumpiness variable” could be added to their model of wet sand to make an accurate model of oobleck. In their model, they included mathematical terms to describe how this variable would grow and shrink under a certain stress or force.

“Now we have a robust way of modeling how clumpy any chunk of the material in the body will be as you deform it in an arbitrary way,” Baumgarten says.

The researchers incorporated this new variable into their more general model for wet sand, and looked to see whether it would predict oobleck’s behavior. They used their model to simulate previous experiments by others, including a simple setup of oobleck being squeezed and sheared between two plates, and a set of experiments in which a small projectile is shot into a tank of oobleck at different speeds.

In all scenarios, the simulations matched the experimental data and reproduced the motion of the oobleck, replicating the regions where it morphed from liquid to solid, and back again.

To see how their model could predict oobleck’s behavior in more complex conditions, the team simulated a pronged wheel driving at different speeds over a deep bed of the slurry. They found the faster the wheel spun, the more the mixture formed what Baumgarten calls a “solidification front” in the oobleck, that momentarily supports the wheel so that it can roll across without sinking.

Kamrin and Baumgarten say the new model can be used to explore how various ultrafine-particle solutions such as oobleck behave when put to use as, for instance, fillings for potholes, or bulletproof vests. They say the model could also help to identify ways to redirect slurries through systems such as industrial plants.

“With industrial waste products, you could get fine particle suspensions that don’t flow the way you expect, and you have to move them from this vat to that vat, and there may be best practices that people don’t know yet, because there’s no model for it,” Kamrin says. “Maybe now there is.”

This research was supported, in part, by the Army Research Office and the National Science Foundation.