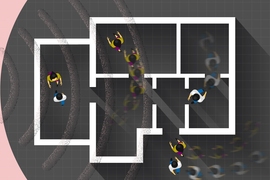 We live in a world of wireless signals flowing around us and bouncing off our bodies. MIT researchers are now leveraging those signal reflections to provide scientists and caregivers with valuable insights into people’s behavior and health.

The system, called Marko, transmits a low-power radio-frequency (RF) signal into an environment. The signal will return to the system with certain changes if it has bounced off a moving human. Novel algorithms then analyze those changed reflections and associate them with specific individuals.

The system then traces each individual’s movement around a digital floor plan. Matching these movement patterns with other data can provide insights about how people interact with each other and the environment.

In a paper being presented at the Conference on Human Factors in Computing Systems this week, the researchers describe the system and its real-world use in six locations: two assisted living facilities, three apartments inhabited by couples, and one townhouse with four residents. The case studies demonstrated the system’s ability to distinguish individuals based solely on wireless signals — and revealed some useful behavioral patterns. 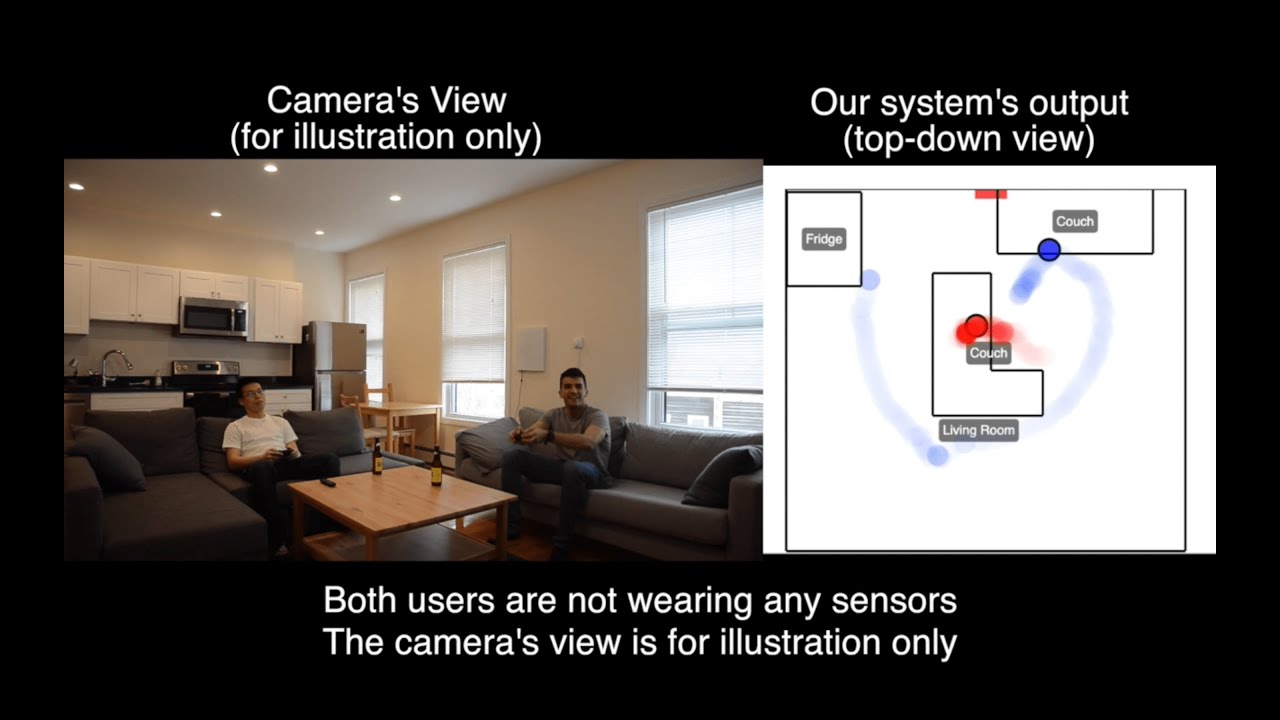 In one assisted living facility, with permission from the patient’s family and caregivers, the researchers monitored a patient with dementia who would often become agitated for unknown reasons. Over a month, they measured the patient’s increased pacing between areas of their unit — a known sign of agitation. By matching increased pacing with the visitor log, they determined the patient was agitated more during the days following family visits. This shows Marko can provide a new, passive way to track functional health profiles of patients at home, the researchers say.

“These are interesting bits we discovered through data,” says first author Chen-Yu Hsu, a PhD student in the Computer Science and Artificial Intelligence Laboratory (CSAIL). “We live in a sea of wireless signals, and the way we move and walk around changes these reflections. We developed the system that listens to those reflections … to better understand people’s behavior and health.”

The research is led by Dina Katabi, the Andrew and Erna Viterbi Professor of Electrical Engineering and Computer Science and director of the MIT Center for Wireless Networks and Mobile Computing (Wireless@MIT). Joining Katabi and Hsu on the paper are CSAIL graduate students Mingmin Zhao and Guang-He Lee and alumnus Rumen Hristov SM ’16.

When deployed in a home, Marko shoots out an RF signal. When the signal rebounds, it creates a type of heat map cut into vertical and horizontal “frames,” which indicates where people are in a three-dimensional space. People appear as bright blobs on the map. Vertical frames capture the person’s height and build, while horizontal frames determine their general location. As individuals walk, the system analyzes the RF frames — about 30 per second — to generate short trajectories, called tracklets.

A convolutional neural network — a machine-learning model commonly used for image processing — uses those tracklets to separate reflections by certain individuals. For each individual it senses, the system creates two “filtering masks,” which are small circles around the individual. These masks basically filter out all signals outside the circle, which locks in the individual’s trajectory and height as they move. Combining all this information — height, build, and movement — the network associates specific RF reflections with specific individuals.

But to tag identities to those anonymous blobs, the system must first be “trained.” For a few days, individuals wear low-powered accelerometer sensors, which can be used to label the reflected radio signals with their respective identities. When deployed in training, Marko first generates users’ tracklets, as it does in practice. Then, an algorithm correlates certain acceleration features with motion features. When users walk, for instance, the acceleration oscillates with steps, but becomes a flat line when they stop. The algorithm finds the best match between the acceleration data and tracklet, and labels that tracklet with the user’s identity. In doing so, Marko learns which reflected signals correlate to specific identities.

The sensors never have to be charged, and, after training, the individuals don’t need to wear them again. In home deployments, Marko was able to tag the identities of individuals in new homes with between 85 and 95 percent accuracy.

The researchers hope health care facilities will use Marko to passively monitor, say, how patients interact with family and caregivers, and whether patients receive medications on time. In an assisted living facility, for instance, the researchers noted specific times a nurse would walk to a medicine cabinet in a patient’s room and then to the patient’s bed. That indicated that the nurse had, at those specific times, administered the patient’s medication.

The system may also replace questionnaires and diaries currently used by psychologists or behavioral scientists to capture data on their study subjects’ family dynamics, daily schedules, or sleeping patterns, among other behaviors. Those traditional recording methods can be inaccurate, contain bias, and aren’t well-suited for long-term studies, where people may have to recall what they did days or weeks ago. Some researchers have started equipping people with wearable sensors to monitor movement and biometrics. But elderly patients, especially, often forget to wear or charge them. “The motivation here is to design better tools for researchers,” Hsu says.

Why not just install cameras? For starters, this would require someone watching and manually recording all necessary information. Marko, on the other hand, automatically tags behavioral patterns — such as motion, sleep, and interaction — to specific areas, days, and times.

Also, video is just more invasive, Hsu adds: “Most people aren’t that comfortable with being filmed all the time, especially in their own home. Using radio signals to do all this work strikes a good balance between getting some level of helpful information, but not making people feel uncomfortable.”

Katabi and her students also plan to combine Marko with their prior work on inferring breathing and heart rate from the surrounding radio signals. Marko will then be used to associate those biometrics with the corresponding individuals. It could also track people’s walking speeds, which is a good indicator of functional health in elderly patients.

“The potential here is immense,” says Cecilia Mascolo, a professor of mobile systems in the Department of Computer Science and Technology at Cambridge University. “With respect to imaging through cameras, it offers a less data-rich and more targeted model of collecting information, which is very welcome from the user privacy perspective. The data collected, however, is still very rich, and the paper evaluation shows accuracy which can enable a number of very useful applications, for example in elderly care, medical adherence monitoring, or even hospital care.”

“Yet, as a community, we need to aware of the privacy risks that this type of technology bring,” Mascolo adds. Certain computation techniques, she says, should be considered to ensure the data remains private.

Filling the gaps in a patient’s medical data