We’ve long known that blood pressure, breathing, body temperature and pulse provide an important window into the complexities of human health. But a growing body of research suggests that another vital sign – how fast you walk – could be a better predictor of health issues like cognitive decline, falls, and even certain cardiac or pulmonary diseases.

Unfortunately, it’s hard to accurately monitor walking speed in a way that’s both continuous and unobtrusive. Professor Dina Katabi’s group at MIT’s Computer Science and Artificial Intelligence Laboratory (CSAIL) has been working on the problem, and believes that the answer is to go wireless.

In a new paper, the team presents “WiGait,” a device that can measure the walking speed of multiple people with 95 to 99 percent accuracy using wireless signals. 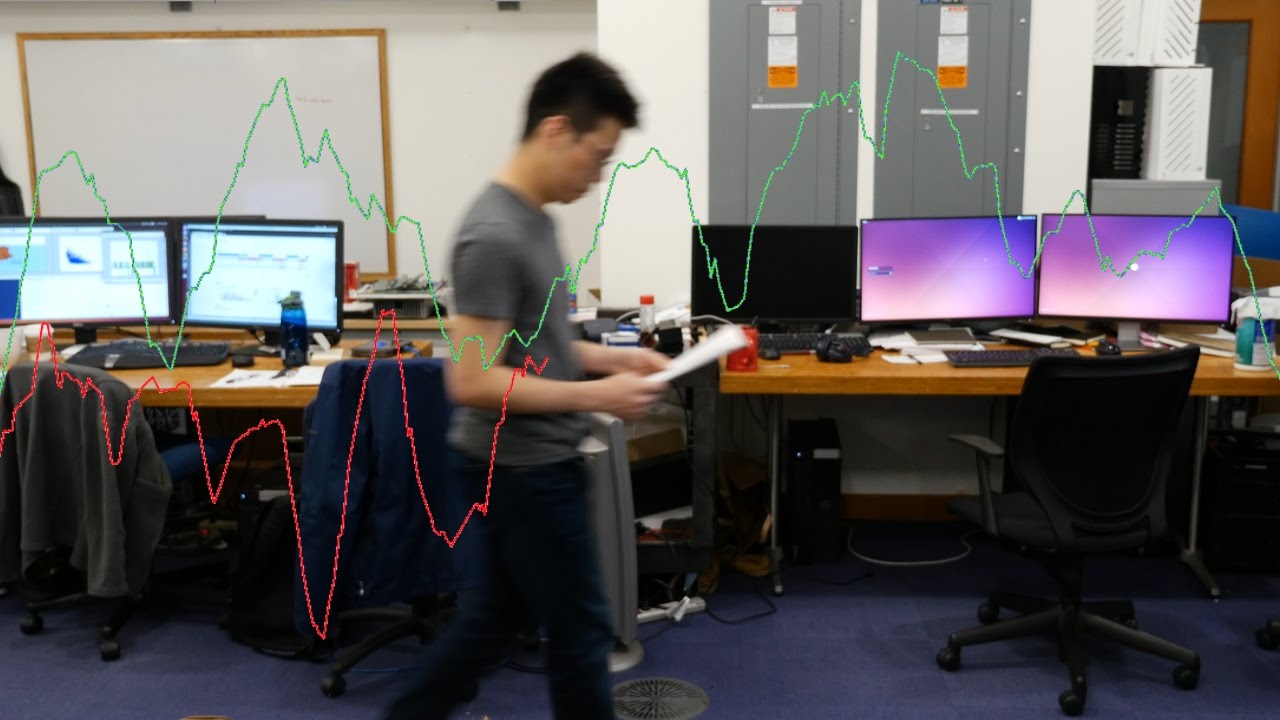 The size of a small painting, the device can be placed on the wall of a person’s house and its signals emit roughly one-hundredth the amount of radiation of a standard cellphone. It builds on Katabi’s previous work on WiTrack, which analyzes wireless signals reflected off people’s bodies to measure a range of behaviors from breathing and falling to specific emotions.

“By using in-home sensors, we can see trends in how walking speed changes over longer periods of time,” says lead author and PhD student Chen-Yu Hsu. “This can provide insight into whether someone should adjust their health regimen, whether that’s doing physical therapy or altering their medications.”

WiGait is also 85 to 99 percent accurate at measuring a person’s stride length, which could allow researchers to better understand conditions like Parkinson’s disease that are characterized by reduced step size.

Hsu and Katabi developed WiGait with CSAIL PhD student Zachary Kabelac and master’s student Rumen Hristov, alongside undergraduate Yuchen Liu from the Hong Kong University of Science and Technology, and Assistant Professor Christine Liu from the Boston University School of Medicine. The team will present their paper in May at ACM’s CHI Conference on Human Factors in Computing Systems in Colorado.

Today, walking speed is measured by physical therapists or clinicians using a stopwatch. Wearables like FitBit can only roughly estimate speed based on step count, and GPS-enabled smartphones are similarly inaccurate and can’t work indoors. Cameras are intrusive and can only monitor one room. VICON motion tracking is the only method that’s comparably accurate to WiGate, but it is not widely available enough to be practical for monitoring day-to-day health changes.

Meanwhile, WiGait measures walking speed with a high level of granularity, without requiring that the person wear or carry a sensor. It does so by analyzing the surrounding wireless signals and their reflections off a person’s body. The CSAIL team’s algorithms can also distinguish walking from other movements, such as cleaning the kitchen or brushing one's teeth.

Katabi says the device could help reveal a wealth of important health information, particularly for the elderly. A change in walking speed, for example, could mean that the person has suffered an injury or is at an increased risk of falling. The system's feedback could even help the person determine if they should move to a different environment such as an assisted-living home.

“Many avoidable hospitalizations are related to issues like falls, congestive heart disease, or chronic obstructive pulmonary disease, which have all been shown to be correlated to gait speed,” Katabi says. “Reducing the number of hospitalizations, even by a small amount, could vastly improve health care costs.”

The team developed WiGait to be more privacy-minded than cameras, showing you as nothing more than a moving dot on a screen. In the future they hope to train it on people with walking impairments from Parkinson’s, Alzheimer’s or multiple sclerosis, to help physicians accurately track disease progression and adjust medications.

“The true novelty of this device is that it can map major metrics of health and behavior without any active engagement from the user, which is especially helpful for the cognitively impaired,” says Ipsit Vahia, a geriatric clinician at McLean Hospital and Harvard Medical School, who was not involved in the research. “Gait speed is a proxy indicator of many clinically important conditions, and down the line this could extend to measuring sleep patterns, respiratory rates, and other vital human behaviors.”

In a WBUR segment about how technology is increasingly being used to assist seniors and caregivers, Rachel Zimmerman highlights Rendever, an MIT spinout, and speaks with Prof. Paul Osterman, Prof. Dina Katabi and Dr. Joseph Coughlin about their work. Zimmerman explains that Coughlin believes “a mix of smart devices and other personal services,” will help people age well.

Boston Magazine reporter Jamie Ducharme writes that CSAIL researchers have developed a device that can measure walking speed using wireless signals. The device can “also measure stride length, which may come in handy when studying conditions that are characterized by small steps, such as Parkinson’s disease.”