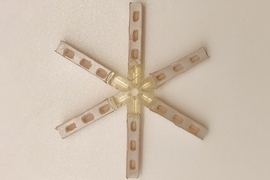 ↓ Download Image
Caption: MIT engineers have designed a capsule that unfolds in the stomach after being swallowed, and can gradually deliver one month’s worth of a contraceptive drug. Pictured here is the preclinical version tested in a new MIT study.
Credits: Image: Tiffany Hua 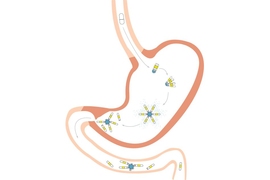 ↓ Download Image
Caption: After being swallowed, the capsule unfolds and slowly releases its drug payload in the stomach. After a few weeks, it breaks down and moves through the digestive tract.
Credits: Credit: Lyndra Therapeutics 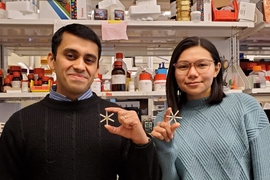 Caption:
MIT engineers have designed a capsule that unfolds in the stomach after being swallowed, and can gradually deliver one month’s worth of a contraceptive drug. Pictured here is the preclinical version tested in a new MIT study.
Credits:
Image: Tiffany Hua

Caption:
After being swallowed, the capsule unfolds and slowly releases its drug payload in the stomach. After a few weeks, it breaks down and moves through the digestive tract.
Credits:
Credit: Lyndra Therapeutics

Oral contraceptives are one of the most popular forms of birth control: In the United States, about 12 percent of women between 15 and 49 use them. However, their effectiveness depends on being taken every day, and it is estimated that about 9 percent of women taking birth control pills become pregnant each year.

MIT researchers are now developing an oral contraceptive that only has to be taken once a month, which could reduce unintended pregnancies that result from forgetting to take a daily dose. This kind of monthly contraceptive could have a significant impact on the health of women and their families, especially in the developing world, the researchers say.

“We are hopeful that this work — the first example ever of a month-long pill or capsule to our knowledge — will someday lead to potentially new modalities and options for women’s health as well as other indications,” says Robert Langer, the David H. Koch Institute Professor at MIT.

The new contraceptive is contained within a gelatin-coated capsule and can carry three weeks’ worth of a contraceptive drug. This capsule remains in the stomach after being swallowed and gradually releases the drug. Tests in pigs showed that this kind of drug release can achieve the same concentration of the drug in the bloodstream as taking a daily dose.

Langer and Giovanni Traverso, an assistant professor of mechanical engineering at MIT and a gastroenterologist at Brigham and Women’s Hospital, are the senior authors of the study, which appears today in Science Translational Medicine. Ameya Kirtane, a senior postdoc at MIT’s Koch Institute for Integrative Cancer Research, and Tiffany Hua, a former technical associate at MIT, are the lead authors of the paper.

The new contraceptive pill is based on star-shaped drug delivery systems that the MIT team previously developed, which can remain in the digestive tract for days or weeks after being swallowed. The delivery systems are placed in gelatin capsules that dissolve once they reach the stomach, allowing the folded arms of the star to expand and slowly release their payload.

In their earlier studies, the researchers loaded the capsules with drugs to treat malaria, as well as HIV drugs, which currently have to be taken every day. Much of this work has been funded by the Bill and Melinda Gates Foundation, which urged the team to adapt the capsule to deliver long-lasting contraceptive drugs. Previous research has suggested that people are better at remembering to take medicine when they have to take it only weekly or monthly, instead of daily.

To make their new contraceptive pill last for three to four weeks, the researchers had to incorporate stronger materials than those used in the earlier versions, which could survive in the harsh environment of the stomach for up to two weeks. The researchers tested materials by soaking them in simulated gastric fluid, which is very acidic, and found that two types of polyurethane worked best for the arms and the central core of the star.

The researchers loaded the contraceptive drug levonorgestrel into the arms of the device and found that by changing the concentrations of the polymers that they mix with the drug, they can control the rate at which it is released. Once the capsule reaches the stomach it expands and becomes lodged in place.

In a study of pigs, the researchers found that the capsules could release the drug at a fairly constant rate for up to four weeks. The concentration of the drug found in the pigs’ bloodstream was similar to the amount that would be present after ingesting daily levonorgestrel tablets. However, the capsules maintained these drug levels for nearly a month, while the tablets last for only a day.

For use in humans, the capsule would be designed to break down after three or four weeks and exit the body through the digestive tract. The researchers are working on several possible ways to trigger the arms to break off, including through changes in pH, changes in temperature, or exposure to certain chemicals.

“Lack of access to contraceptives is a global health issue that contributes to unnecessary maternal and newborn deaths every year,” says Kimberly Scarsi, an associate professor of pharmacy practice and science at the University of Nebraska Medical Center, who was not involved in the research. “A once-monthly oral contraceptive would provide a discreet, noninvasive birth control option that could significantly improve medication adherence to give women more control over their health and family planning decisions.”

Lyndra Therapeutics, a company founded by Langer, Traverso, and others, recently received a $13 million grant from the Gates Foundation to further develop the monthly contraceptive pill so that it can be tested in humans.

“Through the development of these technologies, we aim to transform people’s experience with taking medications by making it easier, with more infrequent dosing in the first once-a-month, orally delivered drug system. We’re very committed to getting these technologies to people over the coming years,” says Traverso, who said he anticipates human tests may be possible within three to five years.

Improved contraception not only has health benefits, but also makes it easier for women to go to school and financially support themselves and their families. However, according to the World Health Organization, 214 million women of reproductive age in developing countries who want to avoid pregnancy are not using a modern contraceptive method, such as birth control pills.

“Coming up with a monthly version of a contraceptive drug could have a tremendous impact on global health,” Kirtane says. “The impact that oral contraceptives can have on human health and gender equality cannot be overstated.”

The researchers also believe that such a pill could be appealing for women who would prefer a long-lasting oral contraceptive over other long-term contraceptives such as intrauterine devices.

“Even with all these long-acting devices available, there’s a certain population who prefers to take medications orally rather than have something implanted,” Kirtane says. “For those patients, something like this would be extremely helpful.”

The research was funded by the Bill and Melinda Gates Foundation. Other MIT authors of the study are Alison Hayward, Aniket Wahane, Aaron Lopes, Taylor Bensel, Sierra Brooks, Declan Gwynne, Jacob Wainer, Joy Collins, and Siid Tamang. Ambika Bajpayee of Northeastern University and Frank Stanczyk and Lihong Ma of the University of Southern California are also authors of the paper.

MIT researchers have created a star-shaped capsule that could be used to deliver monthly doses of contraceptive drugs, reports Eric Cheung for CNN. “The capsule is coated with gelatin that can remain in the stomach for weeks after being swallowed,” Cheung explains.

Popular Science reporter Sara Chodosh spotlights a new oral contraceptive capsule developed by researchers at MIT and Brigham and Women’s Hospital that would only need to be taken once a month. Chodosh notes that, “ultimately, this new device could help people worldwide.”

A new long-lasting pill developed by MIT researchers could be used to deliver contraceptive drugs on a monthly basis, reports Michelle Roberts for the BBC News. “The prototype is a star-shaped drug delivery system packaged into an easy-to-swallow dissolvable capsule no bigger than a regular fish oil tablet,” Roberts reports.

Wired reporter Megan Molteni writes that MIT researchers have developed a slow-release pill that can gradually deliver one month’s worth of contraceptive drugs. “From an engineering aspect, the key novelty is the ability to deliver a drug for a month after a single ingestion event,” explains Prof. Giovanni Traverso.

MIT researchers have created a new long-lasting capsule that has been designed to survive in the human stomach for 30 days and could be used to deliver monthly doses of oral contraceptive drugs, reports Alice Park for TIME. “We see an enormous number of potential applications,” says Prof. Robert Langer.

A new long-lasting pill developed by MIT researchers could be used to deliver contraceptive drugs on a monthly basis, reports Michelle Roberts for the BBC News. “The prototype is a star-shaped drug delivery system packaged into an easy-to-swallow dissolvable capsule no bigger than a regular fish oil tablet,” Roberts reports.

MIT researchers have developed a new star-shaped device that unfolds in the stomach and gradually releases a drug, reports Lauran Neergard for the Associated Press. “We developed this capsule system that looks like a starfish, that can stay in the stomach several days, weeks, even a month at a time,” says Prof. Giovanni Traverso.

New Scientist reporter Jessica Hamzelou writes that MIT researchers have developed an oral contraceptive capsule that may only need to be taken once a month. “The goal here was to develop a discreet, non-invasive system that can provide long-acting oral contraception,” explains Prof. Giovanni Traverso.