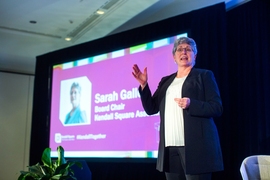 ↓ Download Image
Caption: Sarah Gallop, who serves as chair of the board at the Kendall Square Association (KSA) and co-director of MIT’s Office of Government and Community Relations, speaks to the crowd at the KSA’s 10th annual meeting April 3.
Credits: Credit: Eric Haynes

Caption:
Sarah Gallop, who serves as chair of the board at the Kendall Square Association (KSA) and co-director of MIT’s Office of Government and Community Relations, speaks to the crowd at the KSA’s 10th annual meeting April 3.
Credits:
Credit: Eric Haynes

Speakers at the Kendall Square Association (KSA) annual meeting yesterday considered the ways collaboration in our society is changing and gave updates on their work to strengthen the bonds between members of the local community.

Many organizations champion the concept of collaboration, but this year the KSA wanted to take a closer look at the influence modern technology has had on collaboration between people, organizations, and societies.

The KSA is a nonprofit organization made up of industry, government, and academic officials, which seeks to build partnerships, host events, advocate for public policy issues, and tell the story of Kendall Square’s transformation. Approximately 350 people from a wide range of companies and organizations attended this year’s meeting, which was hosted by event sponsor Boston Marriot Cambridge.

The meeting also included talks on the KSA’s Diversity, Equity, and Inclusion Initiative; efforts to improve commuting options; and recent accomplishments in the bustling Kendall Square area that many at the meeting referred to as the most innovative square mile in the world.

The meeting’s keynote speaker was Jeremy Heimans, co-author of the recently released book “New Power: How Power Works in Our Hyperconnected World — and How to Make It Work for You”. In his talk, Heimans described the new power structures enabled by technology, citing examples such as the #MeToo movement’s effectiveness at holding previously untouchable company executives accountable for sexual misconduct, and the fact that Airbnb is currently more valuable than Hilton.

He described new power as current, open, and made by many people, and he challenged attendees to start thinking about when and where to turn to these new power dynamics in their organizations.

“It’s so important for us to learn together,” Gallop says. “Each year, we bring in a speaker that’s going to help us broaden our minds, broaden our thinking, and make us think about current issues. Jeremy is teaching us how to make things happen and how to accelerate our work even more.”

During a Q&A after his talk, Heimans told members of the audience that they have an important role to play in this new power landscape, defending science and reason in a society that’s less hierarchical than ever before and where knowledgeable voices can more easily get drowned out.

“Expertise is under assault right now,” Heimans said. “We need you. You’re already densely connected, so experiment with ways to further unleash that. What can you do to increase collaboration, tackle these issues, and spread what you do so well — innovation — around the world?”

The KSA has long been focused on the issues of connectivity, transportation, and diversity and inclusion. Gallop says those goals make MIT’s close partnership with the organization easy.

“I have always felt that the KSA and MIT have very similar values in terms of our missions around learning, being inclusive, and sharing information,” Gallop said. “For me, as an MIT employee and chair of the KSA board, there’s a lot of synergy between the two organizations that makes it a natural fit.”

Last year, the KSA assembled a Diversity and Inclusion Learning Community to get leaders brainstorming ways to promote diversity in the area. Since then, they’ve hired an expert facilitator to guide the group, and they are currently assembling their second cohort of leaders in the area.

The KSA also announced a series of design-thinking workshops and meetings to be held throughout April as part of its placemaking initiative. The KSA defines placemaking as “a collaborative process to better define, activate, and program public space.” To help with the initiative, the KSA assembled a working group of professionals with placemaking expertise that includes MIT faculty members, urban planners, real estate developers, and community and business leaders.

“We want to optimize conditions for connectivity and collaboration,” said Jesse Baerkahn, founder of urban design firm Graffito SP and a member of the KSA’s board of directors. “We’ll do that by injecting play, fun, and beauty into the area that reflects the magic and uniqueness that makes Kendall Square what it is today.”

Improving commuting times and safety for Kendall Square’s workers is another area where the KSA has been active over the last year. Members of the KSA meet regularly with the MBTA and the Massachusetts Department of Transportation, and have been working closely with other advocacy groups like T4MA and A Better City over the past year.

In October, the KSA launched the Transportation ADVANCE Initiative to engage the Kendall Square community through a series of experiments to find hyper-local solutions to improving workers’ commutes.

Of course, the KSA’s 10th anniversary also offered an opportunity to reflect on how much Kendall Square and the KSA have evolved over the years. The area’s past as an industrial wasteland has been well-documented, but attendees also discussed the more recent transformation of the last 10 years.

“Everywhere I go, people talk about how Kendall Square is changing, with new buildings, restaurants, gathering spaces, people, inventions, and companies,” Gallop said in her opening remarks. “Sometimes, I have to take a minute when I’m walking around because a building I swear wasn’t there last week is suddenly taking shape in the square. But Kendall has always been about change.”

In a manner similar to the area, Gallop says the KSA’s priorities are always evolving.

“Our priorities may change; the beauty of Kendall Square is that it’s always changing,” Gallop says. “If you come back in a few years there might be a new priority area — or three new ones.”