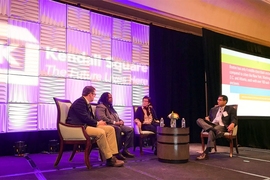 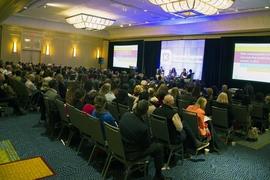 ↓ Download Image
Caption: Around 350 people from the KSA's 175 industry and academic partners, and from the general public, attended the annual meeting, held at the Boston Marriot Cambridge.
Credits: Image: Claire Danielle Vial

Caption:
Around 350 people from the KSA's 175 industry and academic partners, and from the general public, attended the annual meeting, held at the Boston Marriot Cambridge.
Credits:
Image: Claire Danielle Vial

The 10th annual meeting of the Kendall Square Association (KSA) took a hard look at the region’s widespread diversity issues, historical and current, and featured members of The Boston Globe’s Spotlight team, who discussed their latest investigation into racism in Boston.

The KSA is a nonprofit organization of 175 industry and academic partners — including Google, Microsoft, and MIT — in and around Kendall Square that promotes the vibrancy of the district. Each year, the KSA holds a meeting to elect new board members, provide updates on projects, and host guest speakers who share insights on technology, business, education, and other fields.

Welcoming around 350 attendees to the Boston Marriot Cambridge, Cambridge Mayor Marc McGovern praised the KSA and thanked the Spotlight reporters for taking on the “incredibly important topic” that’s critical to his city.

“Even here, in the People’s Republic of Cambridge,” he quipped, “we have race and class issues that sometimes we don’t want to address, because we think they don’t happen here, but they do. Putting a spotlight — pun intended — on that issue, and having us take a look at ourselves and self-reflect, is something we have to continuously do.”

Cambridge, he added, can be “a city of contradictions.” Even with high income levels, Cambridge “has a higher poverty rate than the state average. It’s also a community where 500 homeless people are on our streets every night and where death by overdose has doubled in the last year.”

The city is currently tackling those issues, he said: “We want to truly be the socially economic and just community we claim to be.”

Projection screens in the front of the room displayed some of the data uncovered as part of the Spotlight series. For instance: A recent national survey by the Globe found black people ranked Boston as the least welcoming city for people of color among eight major U.S. cities; black student enrollment at many top Boston universities is in the single digits; only two black politicians have been elected to statewide office in the last 50 years; at publicly traded firms, only 1 percent of board members are black; and the median net worth for whites is nearly $250,000, while it’s a mere $8 for blacks. “That’s eight — as in single-digit eight,” said panel moderator Malick W. Ghachem, a professor of history at MIT, kicking off the discussion.

Early in the panel, Ghachem asked a core question: Why isn’t racism a scandal in Boston? He referenced the bombshell 2002 Spotlight report on the sex abuse scandal in the Boston archdiocese. The reporting team won the 2003 Pulitzer Prize for Public Service and the investigation became the basis for the 2015 film “Spotlight.”

But Walker disagreed. It’s a scandal — just more widespread and without “specific bad actors.” People react to the issue differently than they would to “a specific, abusive priest, but that doesn’t mean it’s any less scandalous,” he said. “I don’t think it gets dismissed.”

Agreeing, Wen said media and the public generally seek a “villain” in news stories. “Racism is an issue that is just more ubiquitous” and lacks a specific villain to rail against, she said.

But, as Ghachem pointed out, the recent Spotlight report reveals Boston’s diversity issues have, in fact, been largely dismissed. The data indicate not much has changed since Globe reporters tackled the region’s racial equality in 1983: In 2015, 4.6 percent of black workers were officials and managers, compared to 4.5 percent from 1983; the black unemployment rate is still, after 30 years, double the rate among whites; and the “Vault” — an organization of Boston’s most powerful business leaders, now called “New Vault” — still has zero black members.

Some things have changed, Ryan added, such as that African-Americans “didn’t necessarily fear for their safety if they went into certain neighborhoods. But that’s a pretty low bar” for measuring progress, he said.

Conversation soon turned to the rising Seaport neighborhood in the South Boston Waterfront — one part of the Spotlight investigation — which has very few black residents. In the past decade, according to the Spotlight team, lenders have issued only three residential mortgages, out of 660, to black buyers. Yet, the neighborhood is funded by nearly $18 billion in taxpayer dollars.

The neighborhood represents a squandered opportunity for Boston to encourage diversity, according to the Spotlight team. Their report, Ryan said, aimed to “underscore the point that … it’s not just private funding that has created this situation. … When you tally up what we’ve spent on those buildings … it was pretty extraordinary,” but unrepresentative of Boston’s citizens.

Among other issues discussed were: individual vs. systematic racism; how to diversify neighborhoods and schools in Boston; how the general public can fight racism; and Amazon’s plans to lease an office building in the Seaport that could create 2,000 jobs, despite black and Latino drivers having filed a 2017 class action suit in Massachusetts accusing the online retailer of racial discrimination.

Ghachem’s final question centered on bringing “inclusion riders” to sectors in Boston. Made popular by actress Frances McDormand’s Oscar speech this year, the concept refers to actors demanding, in contract, diversity among a film’s cast and crew. “Can inclusion riders work in the tech world?” Ghachem asked. “Is this a concept people can use to diversify higher education, technology, construction?”

There’s a good chance they could, Wen said. Using an example of law firms, she said some corporations are starting to hold law firms accountable for lack of partner diversity — which has encouraged greater diversity. “The pressure point has to come from somewhere,” she said. “That’s the only thing sometimes that will trigger change.”

The meeting included the official announcement of new KSA President C.A. Webb, who in 2015 co-founded Underscore VC, a tech venture firm, and led the New England Venture Capital Association for four years. She has served on the KSA board for years and as interim president for the past nine months.

KSA is a “connective tissue,” Webb said, that builds relationships around Kendall Square, gathers feedback from community members, and conducts research. “Then, we look for the actions that we can take that have the greatest impact, that best leverage our resources, and will respond to the needs of this community,” she said.

Her vision of Kendall Square’s future, she said, “is one of shared prosperity, a broad inclusivity, and an open access.” Plans include improvements to MBTA, including more maintenance, fixes to service advancements, and mobility solutions, “so all of us can move into, out of, and through Kendall Square more easily.”

Inviting the Spotlight team to speak at the meeting was “a carefully considered choice,” she said, as it would address racism, sexism, homophobia, and other issues rife in the region and around the world. “Today marks an important part of our journey …  to take a hard look at ourselves and ask what we must do to develop … strategies for building truly diverse and truly inclusive organizations,” she said.